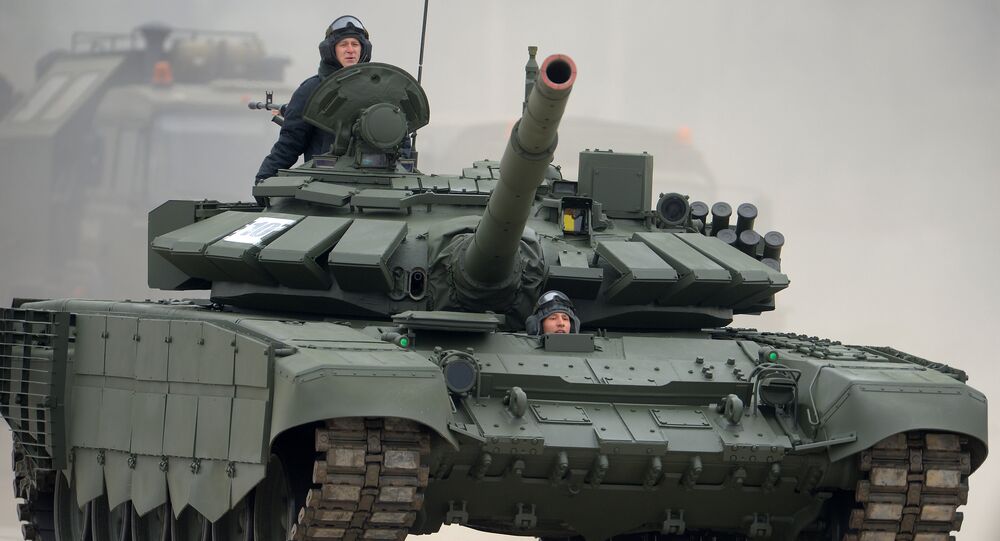 During the Tank Biathlon 2017 contest in the Moscow Region, viewers were able to appreciate the advanced characteristics of a new tank Russia is touting for its enhanced armor.

© Sputnik / Maksim Blinov
'Space Age Technology': Why Russia's T-90 Tank is Taking Over the World
The international Tank Biathlon contest is under way in Moscow Region's Alabino training area, an event which has drawn spectators to appreciate the sophisticated characteristics of Russia's upgraded T-72B3 tank, according to the Russian news agency Vestnik Mordovii.

The T-72B3 is Russia's latest modernized version of the T-72 Soviet battle tank; it specifically features advanced armor protection and is rightly touted by the media for being "super-protected."

The upgraded T-72B3 tank was showcased for the first time during a rehearsal of the May 9 Victory Day Parade in Moscow.

Ever since Turkey lost at least 10 German-built Leopard main battle tanks to rear assaults in urban combat with Daesh during the Syrian War, the world's armies have had to re-think the war machines' vulnerabilities.

Russia received new batch of T72B3. Russia is modernizing its T72 fleet to B3 standards for enhancing its operational age & compactability. pic.twitter.com/saPODbcNsN

The modernized T-72B3 can travel 70 kilometers per hour thanks to its 1,130 horsepower engine, which has improved the tank's mobility despite its increased weight of about 45 tons.

© Wikipedia / Vitaly V. Kuzmin
Sure Shot: T-72, T-90 to Get Armata Tank's Electronic 'Brain' for Fast Targeting
The tank features a new smoothbore 125-mm gun characterized by increased survivability of the trunk, and the Sosna-U sighting system which helps the tank's crew of three destroy a target at a distance of up to five kilometers.

The T-72B3 is also equipped with a new ballistic computer to increase accuracy.  Additionally, it is fitted with an independent panoramic sight for the tank's commander, with its own thermal imaging device.

At present, the upgraded T-72B3s are entering tank divisions of the Russian army, Vestnik Mordovii reported.

Why Russia's T-90 Is the Tank of Choice for Iraq