Russia and China's naval drills in the Baltic Sea are a demonstration of expanding military cooperation within the Shanghai Cooperation Organization, Captain of the first rank Mikhail Nenashev told RIA Novosti.

© Sputnik / Igor Zarembo
What Irks NATO Most About the Joint Russian-Chinese Drills in the Baltic
Chinese naval ships were welcomed at the port of Baltiysk in Russia's Kaliningrad region on Friday for participation in the Maritime Cooperation-2017 joint naval drills, which go on until July 28.

Chinese warships taking part in the drills include the guided missile destroyer Hefei, the frigate Yuncheng and the supply ship Lomahu. The Russian side committed two Steregushchiy-class corvettes – the Steregushchiy and the Boikiy, a rescue tug, Ka-27 shipborne helicopters, Su-24 tactical bombers and An-26 military transport aircraft.

Following a coastal stage, on Monday the navies began the second, active sea stage. The drills include anti-ship, anti-sub, and anti-aircraft defense, search and rescue and anti-piracy.

Military expert Konstantin Sivkov, a Russian naval captain of the first rank, told RIA Novosti that the arrival of Chinese vessels in the Baltic Sea is an unprecedented demonstration of Beijing's readiness for greater defense cooperation with Moscow, and to flex its military muscles in the global arena.

"These exercises are of enormous significance: it is the first time ever that the Russian and Chinese navies have held joint drills in the Baltic Sea." 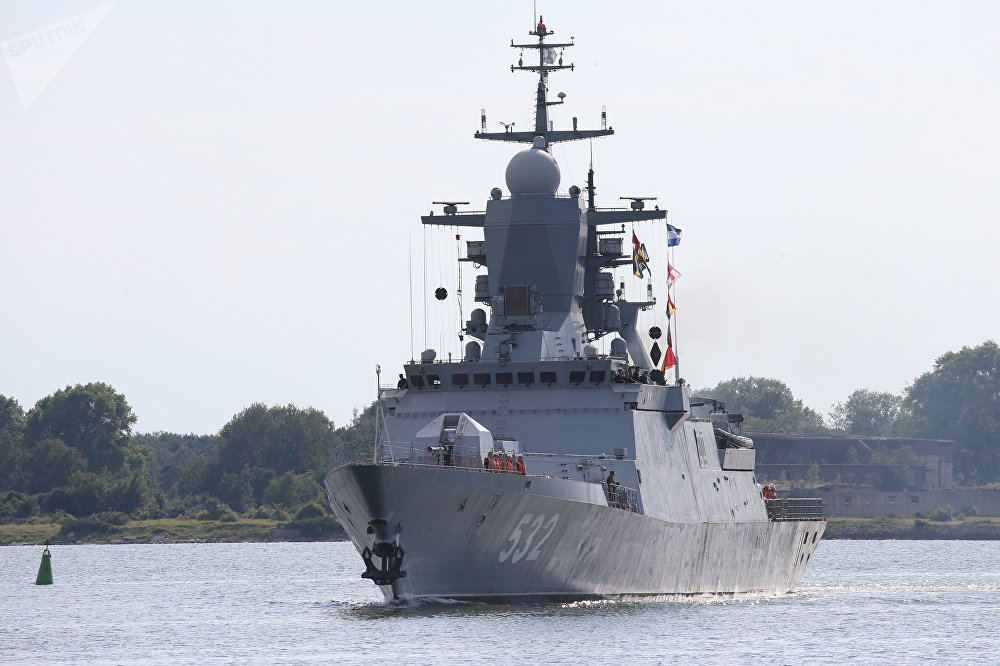 © Sputnik / Igor Zarembo
Boiky corvette in Baltiysk.
"It shows that China is committed to supporting Russia not only in the Pacific region, but if necessary to transfer its warships to help Moscow in the Atlantic region, using the North Sea route," Sivkov said.

Russia and China are founder members of the Shanghai Cooperation Organization (SCO), which promotes political, economic and security cooperation between Eurasian countries. India and Pakistan recently joined the organization, bringing the number of members to eight.

Captain of the first rank Mikhail Nenashev, Chairman of the All-Russian Movement for Supporting the Fleet, said that the drills may signal the extension of the SCO's military responsibilities particularly in light of the aggression shown by NATO.

© Sputnik / Igor Zarembo
The Type 052D destroyer Hefei of the Chinese Navy arrives in Baltiysk for the 2017 Naval Cooperation Russia-China drills
"We see that the EU is tied up in contradictions and international security requires strong players. Russia and China are showing the world that their efforts to maintain peace are taking on a transatlantic scale. Moscow and Beijing are offering the world a new concept of international security."

Nenashev said that NATO will carefully monitor the navies' activities but its ships are unlikely to get too close to the drills.

"There is huge international interest in these drills, I don't think that NATO will carry out any provocations. Of course, the alliance will conduct radio reconnaissance of China and Russia's movements, and perhaps they will try and make a show of daring and approach the area where the drills are being held."

Last month, Russian Defense Minister Sergei Shoigu presented his Chinese counterpart Chang Wanquan with a road map for the development of bilateral military cooperation over the next three years.

© Sputnik / Igor Zarembo
Baltic Frontier: China Will Hold Naval Drills 'Wherever Its Interests Demand It'
Yevgeniy Zaitsev, director of the Center for Russian-Chinese Studies at Moscow State University's Faculty of Journalism, told Radio Sputnik that the road map aims to build on the defense cooperation framework already laid down by the SOC.

"I think that one of the main drivers pushing Russia and China to sign such a plan is the growing terrorist threat. One of the best-known areas of military cooperation between Russia and China is joint military exercises, in particular anti-terrorist exercises within the framework of the SCO," Zaitsev said.