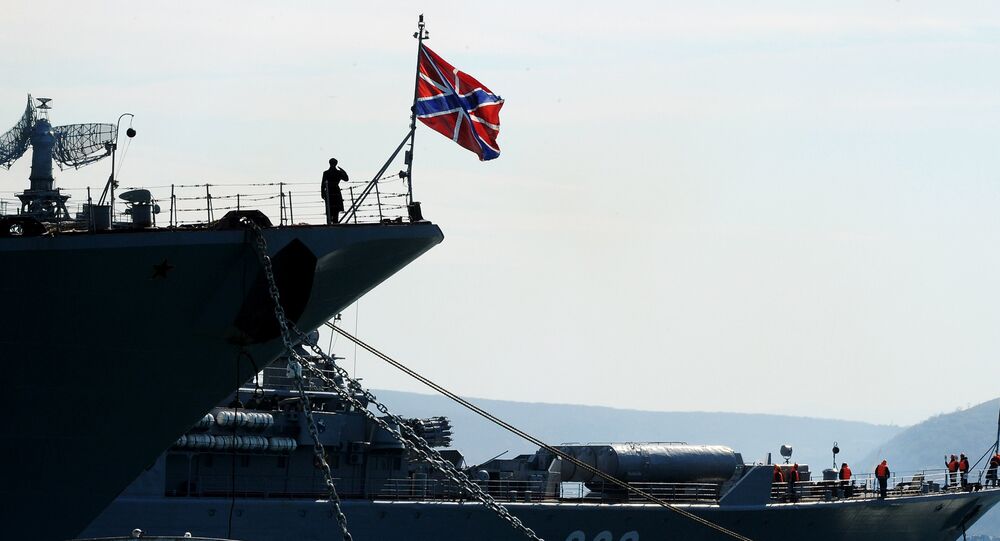 Using high technologies is of paramount importance to the creation of an effective and combat-capable navy, a Russian military expert told Sputnik; according to him, a comprehensive approach is needed, rather than a focus on any particular kind of force, such as submarines or surface ships.

© Sputnik / Ramil Sitdikov
Russia to Showcase Naval Robots at Army-2017 Expo - Defense Ministry
On July 20, President Vladimir Putin signed a decree on the Basics of Russia's State Navy Policy for the Period Until 2030.

The document stipulates the Russian Navy being armed with high-precision long-range and hypersonic missiles, robotic systems and unmanned submarines.

According to the doctrine, Moscow will not allow any substantial superiority of other states' navies over the Russian Navy.

"The existing threats to Russian national security in the world ocean remain, while new ones emerge, … [including] the ambition of a range of countries, primarily the United States and its allies, to dominate in the world ocean including the Arctic, as well as to achieve overwhelming superiority of their naval forces," the document reads.

In this vein, Admiral Vyacheslav Popov, Russian military expert and former commander of the country's Northern Fleet, said in an interview with Sputnik that "in the past, a whole squadron was needed to resolve an important task which now can be solved by two or three ships with good information support and radio electronic protection."

He added that he is convinced that in order to create a truly effective and combat-capable navy, a comprehensive approach is needed, not a focus on any particular kind of force, such as submarines or surface ships.

Right now, the Russian Navy includes a spate of surface ships and submarines for various goals, such as aircraft carriers, multipurpose, rocket-artillery, landing and mine-sweeping ships, as well as strategic missile submarines and multipurpose submarines.

© Sputnik / Ilya Bogachev
More Dangerous Than Shtorm? New Russian Aircraft Carrier Takes Shape
Predicting the alignment of forces at sea in the next 15 years, Popov suggested that it would be difficult for Russia to do without the aircraft carriers that he said would be tasked with providing air defense at Russia's sea borders.

This will harmoniously fit them into Russia's military defensive doctrine, according to Popov.

"We need universal aircraft carriers in the Northern and Pacific Fleets. These ships will perform air defense missions on a priority basis, as well as will be capable of launching strikes on sea and coastal targets," he said.

According to him, the implementation of Russia's state naval doctrine until 2030 is quite feasible, especially given that Russia is second only to the United States in terms of fleet capabilities, and in some respects, including a nuclear marine component, even maintains parity with America.

According to the state naval doctrine, another threat is "the existence of foreign countries' territorial claims to Russia with respect to coastal territories and adjacent water areas." In this regard, Russia will have to grapple with terrorists, pirates and poachers, as well as arms and drug trafficking.

© Photo : militaryrussia.ru
Hypersonic Shield: Why Russia's Zircon Missile Could Be a Game Changer
In order to tackle all this, Russia needs to create a powerful navy, capable of causing critical damage to enemies with both conventional and nuclear weapons.

Speaking to Sputnik, Russian political analyst Oleg Ponomarenko remained upbeat in this vein about prospects pertaining to the creation of hypersonic weapons for the Russian Navy, though adding that this may not be enough.

"If we talk about the technical side of the issue, this task can be implemented. On the other hand, creating hypersonic missiles is just one of the tasks. In this sense, equipment that will come in the middle of the next decade will not be mass produced given its complexity," Ponomarenko said.

© Photo : Amur Shipbuilding Plant
Pivot to the Pacific: Russian Navy Could Get Two More Sovershenny-Like Warships
As for the development of hypersonic weapons, Russia is on a par with the world’s leading high-tech countries. The tests of the Russian hypersonic sea-launched missile 3M22 Zircon, due to be put in serial production in the near future, are currently underway.

Touting the Russian Navy as one of the most powerful fleets in the world, Ponomarenko also called for a shift from Soviet legacy to new developments, pointing to the growing clout of the Chinese Navy, which "is coming on [competitors'] heels."