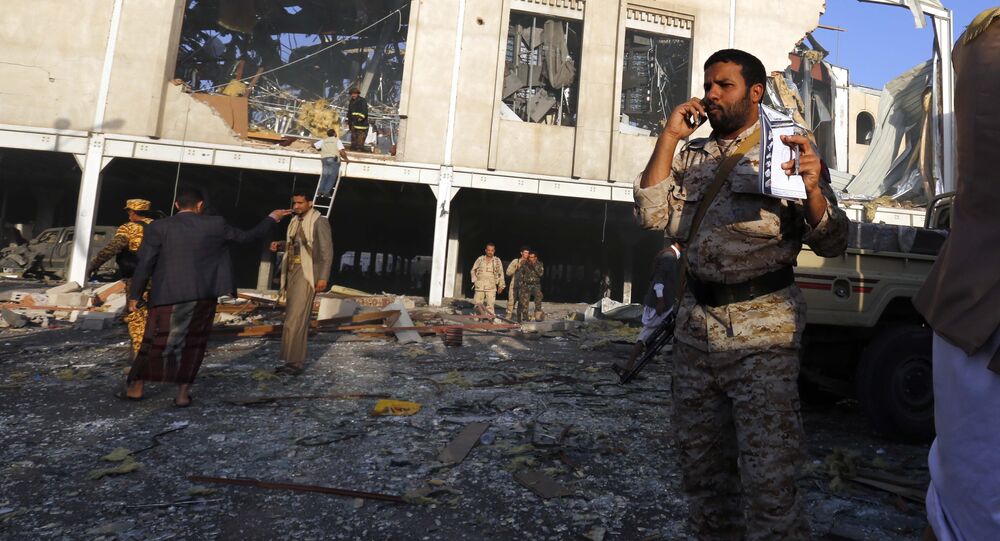 The UK government approved US$370 million (£283 million) in arms sales to Saudi Arabia in the six months after the infamous October 2016 airstrike on a funeral hall in Yemen, which killed 140 and injured hundreds. An arms trade campaigner has told Sputnik it's unlikely the UK will face repercussions internationally.

In the wake of the attack, Trade Secretary Liam Fox delayed signing a set of Saudi Arabian export licences, and readied officials for arms exports to Riyadh to be suspended outright.

However, Foreign Secretary Boris Johnson advised Mr. Fox the sales should continue, as he judged there was no clear risk British weapons would be used for serious breaches of international humanitarian law, despite high and rising evidence of Saudi Arabia's indiscriminate bombing of civilians in the conflict.

Hearing about bombing of 34 schools in Yemen since war started in 2015 and bad cholera outbreak #stopDSEI pic.twitter.com/iCShYBL8dx

Over the next six months, according to Campaign Against Arms Trade data, the government authorized a wealth of exports, including US$343 billion in combat aircraft components to the Saudi air force, and US$5 million of bombs and missiles.

Details of export licences to Saudi Arabia for military and dual-use goods controlled by the UK governm… https://t.co/lpwFPrI1Fn via @CAATuk

While a significant reduction from US$1.3 billion of bombs and missiles sent to the country over the course of summer 2015 alone, for campaigners the sales remain a matter of grave concern.

Moreover, the US$370 billion total does not include aircraft cannon equipment, targeting software, aircraft components, assault rifles and more exported under 24 open licences, in which the value of the purchased equipment is not recorded. The total likely underestimates the true figure in any event, as standard individual export licences, which apply to specific sets being exported, are highly opaque.

© REUTERS / Khaled Abdullah
A woman walks past a child at a camp for people displaced by the war, near Sanaa, Yemen April 25, 2017

Andrew Smith, a CAAT spokesperson, says the UK's willingness to maintain exports despite the extensive documentation attesting to Saudi war crimes in Yemen, and the humanitarian crisis ravaging the country as a result, was a clear demonstration the UK's relationship with Saudi Arabia was uncritical.

"The arms trade is fueled by war and conflict, and the threat of war and conflict. Weapons fuel wars and encourage wars — if world peace broke out tomorrow, the arms trade would go out of business. There can't be an ethical arms trade when the end result is going to be escalation. Arms traders don't care where weapons go, they just want to sell as many as possible," Mr. Smith told Sputnik.

Mr. Smith notes the consequences of these sales can be devastating, as it is UK-made fighter jets that are dropping UK-made bombs on Yemen. While arms sales are often defended by the UK government on an economic basis, he is not moved by them.

© AP Photo / Hani Mohammed
Yemenis present documents in order to receive food rations provided by a local charity, in Sanaa, Yemen, Thursday, April, 13, 2017
"Jobs in the defense sector account for a mere 0.2 percent of jobs in the wider economy. Instead of promoting death and destruction, the government should pursue positive and sustainable industries for social good, which harness the skills of arms industry specialists," Mr. Smith said.

"The government recently released a report listing 30 countries where the UK is concerned about the state of human rights and democracy — yet, in the last 12 months, the government has licensed arms to two thirds of them.

"There's a huge amount of hypocrisy in what the UK says, and what the UK does," Mr. Smith added.

© AFP 2021 / LEON NEAL
'On the Verge of Tears': Desperate Yemenis Distraught at UK Stance on Saudi Arms
In July, the Court ruled the government had not breached weapons export laws, which state export licences cannot be granted if there is a "clear risk" the equipment could be used to break international humanitarian law.

The government argued it operated one of the most robust export control regimes in the world, and rigorously examined every purchase application on a case-by-case basis against international export-licensing criteria, and licenses were suspended or revoked in response to "changing facts" on battlegrounds.

Judges ruled in favor of the government, reasoning it had access to senior Saudi officials and sufficient data on the conflict to allow it to be confident there was no clear risk UK weapons might be used to commit atrocities.

CAAT is appealing the decision.