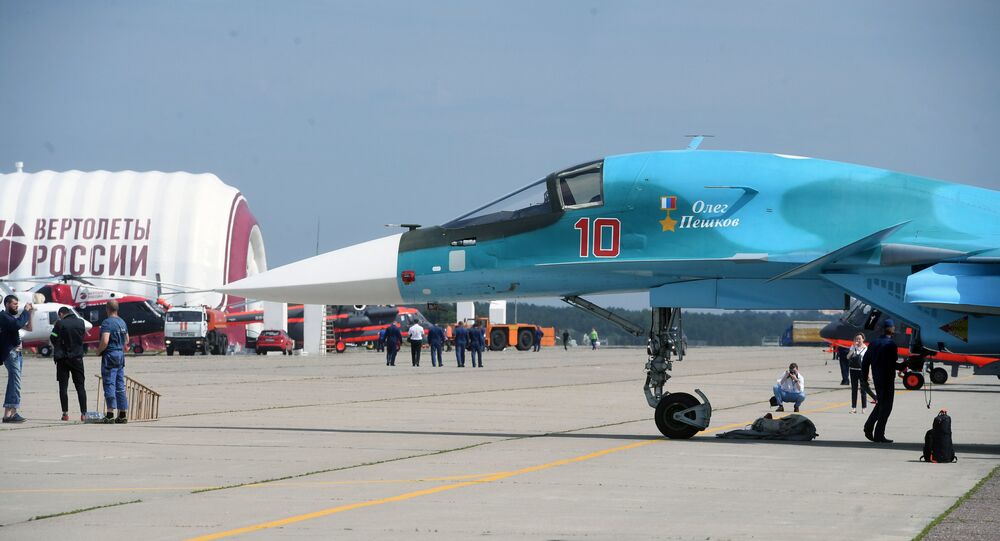 The 13th International Aviation and Space Salon MAKS-2017 kicked off on Tuesday in the Russian city of Zhukovsky, and its commercial part, which completed on Thursday, can already be considered a success with large number of agreements signed, including with foreign partners, and some important statement made by officials.

© Sputnik / Ramil Sitdikov
'Maneuverable, Reliable and Comfortable': MiG-35 to Steal the Show at MAKS-2017 (VIDEO)
MOSCOW (Sputnik) — President Vladimir Putin said in a welcoming letter to the participants and guests of the event that the contracts concluded confirmed foreign partners’ willingness to collaborate with Russia.

"During MAKS-2017 business program, we held negotiations with more than 50 foreign delegations, which resulted in the signing of 15 contracts and cooperation agreements. Our experts made over 50 presentations for delegations from 20 countries at the request of our partners. This exceeded the expected results," Rosoboronexport's delegation head and Deputy Director General Sergey Ladygin said.

© Sputnik / Alexei Nikolskiy
Russia’s Best Fighter Jets and Arctic Drones on Display at MAKS-2017
At this year's MAKS-2017, Rosoboronexport presented over 160 pieces of military equipment. Customers were mostly interested in Su-35, Su-32, MiG-35, Yak-130 and Yak-152 aircraft, as well as Ka-50, Mi-35M and Mi-17V5 helicopters. Aside from this, significant attention was paid to air defense systems, including Pantsir-S1, Verba and Buk-M2E systems.

"The countries of the Middle East and of the Pacific Rim will be chief importers of this type of weaponry," he added.

"Today is a historic event, a preliminary agreement on joint state tests of the first stage of the T-50 plane was signed at the MAKS aviation salon. We begin the second stage of tests. We also received a recommendation on beginning of production of initial batch of planes," Bondarev said.

The president of United Aircraft Corporation Yury Slyusar said that the company was discussing the delivery of first 12 T-50 jets to the Russian Defense Ministry in 2019.

© Sputnik / Irina Kalashnikova
Russia, China Carrying Out Research, Development of Missile Equipment
"Our cooperation has entered a new stage of development… Right now space cooperation between the two countries, be it technology, systems or applications, has the trend of rapid development. Technologies and products of our countries are actively developing, trade also reached a new level. We hope that this [MAKS-2017] aviation salon will help strengthen cooperation with all countries, especially with Russia, in space industry, in joint development of new products, new systems, new applications, in expanding cooperation in more fields, in searching for new objects of cooperation," Yin said.

According to the CEO, joint projects include manned spaceflights, remote probing, navigation systems and other bilateral projects in all areas of space cooperation.

Chinese customers have also expressed interest new unmanned helicopter VRT300, designed to develop the traffic system of the Northern Sea Route and help in the exploration of the Arctic, which was presented by Russian Helicopters for the first time at MAKS-2017.

"Exploration of the Arctic is especially relevant for China, which is planning to become one of the countries that use the Northern Sea Route soon. In this regard, the company notes an interest of potential customers in China to the arctic version of the VRT300 [unmanned helicopter]," Russian Helicopters said.

Technical issues of the contract for the supply of Russian S-400 air defense missile systems to Turkey have been resolved, only administrative ones remain, the general director of Russia's Rostec state corporation Sergey Chemezov said.

"The final decision will be made by the Russian and Turkish governments. Negotiations with the [Russian] Ministry of Finance are underway and, most likely, some funds for this project will be provided by Turkey itself, and some will be received in the form of a loan," Chemezov added.

© Sputnik / Sergei Malgavko
How NATO Can Benefit From Russia-Turkey S-400 Deal and Why Ankara Needs It
"With regard to the equipment, we have bought S-300 systems from Russia. And regarding the S-400, we have not yet come to any decision," Banitarafi said, adding that Iran relies on Russia as a strategic partner in the field of defense.

"Serbian partners are currently expressing their interest in the supply of S-300 SAM battalions. This issue is being discussed," he said.

"Now we are working on new sources of energy and are planning to develop electric aircraft. The main goal is to apply the experience and practices of all design bureaus," Korotkov said.

Meanwhile, the Russian Defense Ministry is considering the development of a vertical takeoff (VTOL) aircraft for aircraft carriers based on the Yak family, Deputy Defense Minister Yury Borisov said.

Ministry of defence of the Russian Federation
Russia Set to Create New Cruise Missiles With Ranges Up to 1,000 Kilometers
"The Defense Ministry is discussing with our aircraft manufacturers the development of an aircraft with a short take-off and landing, possibly with a vertical take-off and landing, this is the development of the Yak line," Borisov said on the sidelines of the MAKS-2017.

Obnosov also said the company had presented an X-250 with a laser self-homing head at the exhibition.

"We are the first in our country to master such technologies, and we hope that by the end of the year we will complete the work on this product. This is very important, because we, like the rest of the world, strive to have the targets differentiated, with minimal damage to the civilian population. Unfortunately, usually there is no war in the bare desert," he said.

A new heavy-duty carbon fiber-reinforced plastic for the manufacture of hulls of space vehicles and solar batteries, as well as wings, blades, engine nozzles, were developed in Russia by the Skolkovo resident Sintez-Project, project's coordinator Vasily Aristov said.

"We managed to get a really heavy-duty carbon fiber reinforced plastic. The strength of this material, with the same weight, is eight times greater than that of the most durable steel. The material has a 30 times less moisture absorption than currently used epoxy-based composite materials, and also 100 times better crack resistance, high temperature resistance and dimensional stability," he explained.

© Sputnik / Ramil Sitdikov
MAKS-2017 May Promote Russian Aerospace Products at Foreign Markets - Putin
European companies are especially eager to cooperate with Russia in the aerospace sector, including supplies of devices equipment and parts, their maintenance, building aircraft and helicopters and even attracting Russian investments in their enterprises.

Chair of the Executive Board of German Aerospace Center Pascale Ehrenfreund told Sputnik that his company was interested in cooperation on an international research space station.

GIFAS, the French aerospace industries association, is open for cooperation with Russia in the area of light helicopters production if helicopters are certified by European organizations, Thomas Chatel, a manager in charge of Europe, Russia and Turkey at GIFAS, told Sputnik.

"We hope that in the field of light helicopters, we will have some opportunities to cooperate more closely. In principle, all civilian helicopters provide an opportunity for cooperation between France and Russia. And we, first of all, can provide aviation equipment and engines, because this is key for light Russian helicopters… And I think that if the Russian side will have an interest in using our equipment in its helicopters in the future, of course we are open to all kinds of cooperation," Chatel said.

According to Chatel, GIFAS wants to be sure that all the cooperation that will be established with Russian companies can be certified in Europe.

"We must be sure that Russian products can be certified not only by the Russian authorities, but also by international organizations, in particular by the European Aviation Safety Agency," Chatel added.

Ehrenfreund, whose company is a regular MAKS participant, said the telescope presented on their stand that would fly to international space station next year, is produced with Russian-German cooperation.

© Sputnik / Aram Nersesyan
Russia's State Arms Exporter Signs 15 Cooperation Deals at MAKS-2017
"We are here to verify the interest of Russian aerospace companies if there is any potential for investment in the Czech Republic," Bolebruch said, adding that areas of cooperation might include engine building and aircraft industry.

Libor Hanus, the director of Russian operations at CzechInvest, said that Czech aerospace companies were already in touch with Russian companies and looked forward to anti-Russia sanctions being lifted to further expand cooperation.