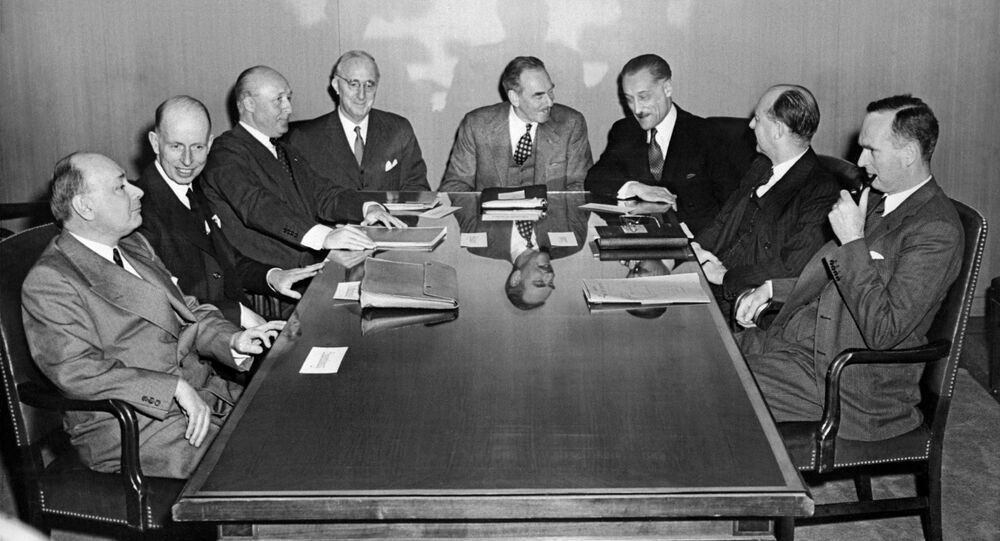 My God, What Did We Do? 68 Years Since the US Senate Ratified NATO Treaty

July 21 marks the 68th anniversary of the US Senate's ratification of the North Atlantic Treaty, NATO's founding document. Despite widespread concerns, the Treaty was passed by 82 votes to 13. While billed as an agreement that would "promote and preserve peace" its backers may be shocked at what NATO went to do and become.

The Treaty was inked at a time of rising concerns over economic and military weakness of Western Europe relative to the Soviet Union, and came after protracted Senate Foreign Relations Committee hearings on the topic.

​During the hearings, many expressed disquet at the prospect at the prospect of the US entering a binding military pact, that would see the country jettison its longstanding tradition of non-entanglement with Europe, a principle as old as the country itself. Others worried the proposed military alliance would conflict with the purposes of the United Nations, and cause friction with the Soviet Union.

Most controversial of the Treaty's provisions was Article Five, which covered "collective defense" — in effect, it would mean an attack against one member state would be considered an attack against every member, and signatories would be obliged to offer military support to that member.

Ernest Bevin, UK Foreign Secretary under the Labour government of 1945 — 1951, was the father of Article Five.

In December 1947, following the collapse of four-party talks between France, the Soviet Union, UK and US on the future of post-war Germany, Bevin was convinced Western powers needed to organize themselves into a mutual defense pact. Then-President Harry S. Truman and Secretary of State George C. Marshall were somewhat reluctant for the US to join any alliance to defend Europe — the US' isolationist legacy and resistance to formal alliances had receded significantly during and after World War Two, but remained a potent strain in US politics. As any treaty required two-thirds support in the US Senate to be passed, it was thought an impossible aim.

As a result, the wording of the collective-defense commitment needed to be vague. US negotiators eventually agreed to language similar to that contained in the 1947 Rio Treaty the US had signed with 21 other countries in the Americas, which provided for assistance in the event of an attack on any member, but did not specify what form that assistance would take.

"The Parties agree an armed attack against one or more of them in Europe or North America shall be considered an attack against them all and consequently they agree if such an attack occurs, each of them will assist the Party or Parties so attacked by taking forthwith, individually and in concert with the other Parties, such action as it deems necessary," the Article reads.

Despite its ratification, in proceedings several Senatorial opponents of the Treaty had already grasped an important reality — Republican Forrest Donnell said the apparent ambiguity and freedom of choice offered by the Article was "illusory."

Moreover, NATO historian Lawrence S. Kaplan notes there was no question Article 5 would entangle the US in a war if invoked, whether or not Congress had declared it before US forces actually took part.

On announcing the passing of the treaty in August 1949, President Truman summed up his vision for the alliance.

"We are not only seeking to establish freedom from aggression and from the use of force in the North Atlantic community, but also actively striving to promote and preserve peace throughout the world," he said.

With that, the NATO alliance — consisting of the UK, US, France, Italy, the Netherlands, Belgium, Luxembourg, Norway, Denmark, Portugal, Iceland and Canada — was formed, a defining structure of the Cold War. NATO's official history proclaims the alliance's Cold War history an unbridled success, given that during the first 40 years of its existence forces were not involved in a single military engagement.

It's true NATO's stated role during the period was to act as a deterrent against military aggression — the alliance's first Secretary General Lord Ishmay said NATO's purpose was to "keep the Russians out, the Americans in and the Germans down" — and on that basis, the lack of direct military confrontation between NATO and the Soviet Union could certainly be considered an achievement.

However, that judgement assumes the Soviet Union had such ambitions, and would've carried them out if it wasn't for the existence of NATO, a view not shared by a majority of Cold War historians.

In any event, NATO may not have been involved in direct military confrontation, but the alliance certainly wasn't dormant — in fact, it was hyperactively engaged in absorbing much of Europe to its folds. Greece and Turkey were added in 1952, the Federal Republic of (West) Germany in 1955, and Spain in 1982.

In the Cold War's wake, NATO's enlargement went into overdrive, and as of July 2017 has gluttonously bloated to 29 members — the Czech Republic, Hungary and Poland joined 1999, Bulgaria, Estonia, Latvia, Lithuania, Romania, Slovakia and Slovenia 2004, Albania and Croatia 2009, and Montenegro 2017. Ukrainian membership of NATO could well follow in time.

While NATO officials allege the enlargement is necessary to guard against "Russian expansionism" in Eastern Europe, they seemingly fail to acknowledge it is their own military alliance that is demonstrably the real expansionist power in the region. Moreover, as the alliance now spans almost the entirety of Russia's western border, and regularly conducts large-scale war games in Russia's neighboring states, it is NATO that is behaving provocatively and aggressively.

Contradictions and inconsistencies are nonetheless arguably fairly fundamental to NATO — as Eastern European politics expert Professor Richard Sakwa once highlighted, a key paradox at the heart of NATO is that it "exists to manage the risks created by its own existence."