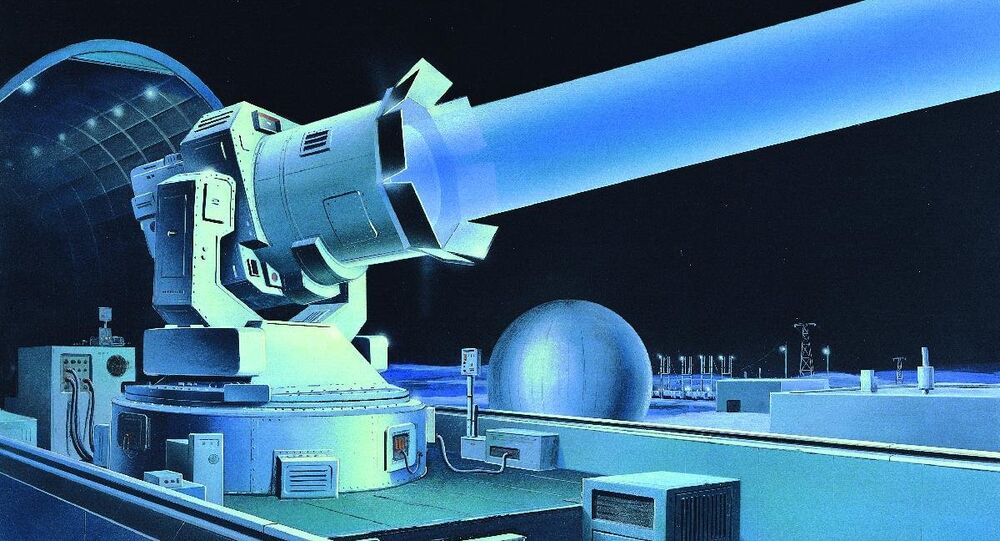 Zvezda contributor Dmitri Yurov outlines the Russian Navy's plans for the construction of Arctic patrol ships with icebreaking capability, and Russian scientists' exploration into the use of laser technology to ease navigation in previously impassable Arctic waters.

In recent years, Russia has considerably expanded efforts to ensure sovereignty and security in the Arctic, building up new military infrastructure, and signing off on the creation of new vessels, bases, and technologies for use in the inhospitable region.

Among the advantages that Russia has long enjoyed in the Arctic region is its fleet of nuclear and diesel-powered icebreakers, already the largest in the world, and continuing to expand.

Last year, St. Petersburg's Baltic Shipyard launched the Arktika (the 'Arctic'), the lead ship of a new class of nuclear-powered icebreakers. When commissioned, the vessel will become the world's largest and most powerful icebreaking vessel, surpassing another Russian ship, the 50 Let Pobedy. The Arktika is expected to be delivered in 2019. Shipbuilders will deliver another two Arktika-class icebreakers, the Sibir ('Siberia) and Ural, in 2020 and 2021. Together, the ships will considerably solidify Russia's capabilities for Arctic navigation.

But in addition to new civilian icebreakers, Russian engineers have also been busy working on another concept – the 'combat icebreaker', an idea which journalist and Zvezda contributor Dmitri Yurov recalled had "long-been considered an absurdity by foreign experts."

"Fighting in low temperature conditions, and the very idea of conducting military operations in such conditions was for a long time considered more like a remote possibility than a genuine necessity," the journalist wrote. "But the rapid development of the Arctic has left its own imprint on the development of warships," he added.

© Sputnik / Alexei Druzhinin
Putin: We Need to Ensure Sovereignty, Transport Security in Russian Arctic
In the mid-2010s, Russian engineers made a conscious decision to forego the construction of another patrol vessel which would need help from support ships to be able to maneuver the five-foot thick ice patches found of the Arctic. Instead, the St. Petersburg-based Almaz Central Marine Design Bureau developed a versatile new multipurpose patrol ship: Project 23550 (also-known as the Ivan Papanin-class Arctic patrol vessel).

© Photo : Russian Defense Ministry
Concept rendering of the Project 23550 Arctic patrol ship
© Photo : arctictime.ru
Russia May Deploy New Radar in Arctic to Detect US Submarines
The multipurpose vessel is conceived as an all-in one Navy warship, icebreaker and tugboat. 110 meters long, 20 meters wide, and with a 6 meter draught, the ship has a displacement of 8,500 metric tons, a range of 6,000 nautical miles, and a cruising speed of 16 knots. The Ivan Papanin will be capable of autonomous operation at sea for up to 60 days at a time. The ship's crew will consist of 60 sailors, with room for 50 more.

Earlier this year, a defense industry source told Janes that the ship will be fitted with a modular armament suite. The ship is "not an icebreaker armed with an Ak-176MA naval gun, but a fully featured combatant designed in accordance with the navy's requirements for ships of such a class," the source said.

And it is precisely the new ship's combat capabilities which have foreign observers worried, Yurov wrote. "Foreign militaries' fears can be boiled down to the fact that this Russian 'combat icebreaker' will not only be able to create corridors through the ice for civilian vessels and ensure the stability of cargo transport, but also, if necessary, destroy vessels which violate Russia's maritime borders."

"In addition to radio-electronic equipment and its heavy-duty hull, Project 23550 icebreakers will include the ability to deploy missile weapons…The Kalibr-NK [cruise missile] system's launch containers can be placed comfortably on the ship behind the helicopter landing pad. A total of eight launchers can be deployed onboard."

But destroying intruders isn't the Ivan Papanin class's only capability, Yurov added. "Depending on the mission, Project 23550 ships can be modified with auxiliary equipment, allowing them to rescue an intruder vessel that's been caught in the ice, and tow it" to a more appropriate location.

"Among other things, two cranes with a towing capacity of up to 28 tons each can be placed aboard the ship, which will not only greatly facilitate the work of the crew, but also be of considerable assistance in rescue (and other) operations."

Put another way, the journalist explained that the new multipurpose, multi-configuration patrol vessels will allow the Russian Navy to ensure the safety of Russia's Arctic borders, the Northern Sea Route, and the general development of the region at a whole new level.

US Navy
US Navy Requests $63.2M for Laser System to Cripple Enemy Drones, Vessels
Alongside the traditional means for overcoming ice barriers – breaking through using a powerful, specially designed hull, scientists have also considered other, more exotic methods. In previous decades, engineers the world over have come up with everything from special steam generators, to explosives, to artillery, to special ice cutters, and other novelties. However, so far, none has seen widespread application.

The same can be said about ideas for melting through the ice using powerful lasers, Yurov noted. "An incision into the ice would greatly ease the ship's movement, and as a consequence, accelerate the ship's progress. However, from the technical standpoint, it is extremely difficult to develop and build a working ship laser that is sufficiently powerful to cut through ice which is 1.5-2 meters thick, even with modern technology."

The main drawback of lasers is finding an effective power supply. In itself, laser technology has been tested repeatedly – both by Russian and American scientists. US engineers developed and tested the YAL-1 airborne laser. The Soviet Union and Russia, meanwhile, had their 1K17 Szhatie self-propelled armored vehicle, the 'Akvilon' ship-based system, and the A-60 airborne laser.

© Photo : Beriev Aircraft Company
The Beriev A-60 Airborne Laser flying laboratory, created in the 1980s to develop laser technology for the Soviet military

"However, all of these projects were developed for highly specialized work in disabling surveillance equipment, and not for cutting ice on an industrial scale," Yurov wrote.

But Russian engineers have already taken the first step in the creation of lasers specifically designed for this task. Later this year, scientists aboard the Dixon, a Russian diesel-powered icebreaker operating in the White Sea, will begin testing of a 30-kilowatt ship-based laser, designed specifically for easing the movement of ships operating in the Arctic environment. The project involves experts from the Moscow-based Astrofizika Design Institute, with the assistance of St. Petersburg's Arctic and Antarctic Research Institute.

Speaking to Zvezda, physicist Viktor Gromov explained that the purpose of the new laser system "is not to shoot something down or destroy it. We're talking about easing as much as possible navigation through northern regions. In addition, it's necessary to test empirically calculations, create the system, measure energy consumption and calculate many other parameters. For the first stage this is enough."

© CC0
The Dixon diesel icebreaker
© Sputnik / Valeriy Melnikov
Russian Military Becomes Unrivaled in Terms of Arctic Warfare
Furthermore, scientists say that the laser's purpose will not be to cut all the way through the ice, but to perform precision cuts to ensure the maximum security of ships' passage. If tests prove successful, such an installation will significantly improve the pass-ability characteristics of ships, and allow them to move in areas not accessible even to conventional icebreakers.

Ultimately, Yurov explained that Russian scientists are looking to create a 200-kilowatt ship-based laser system. "However, the creation of this small laser system will require not only a thorough review of design principles, but also consideration of energy consumption. The fact of the matter is that in the first stages, only nuclear icebreakers can use a 200-kilowatt laser for its intended purpose; only their power plants can generate the energy required for continuous, long-term operation."

In the meantime, the analyst noted, the system to be tested aboard the Dixon has the potential to open enormous opportunities. "Icebreakers equipped with laser installations will be able to interact with warships in the Arctic, quickly moving to required areas; as a result, the combat patrol zone would increase dramatically, and the response time to any threats in the Arctic region would decrease."