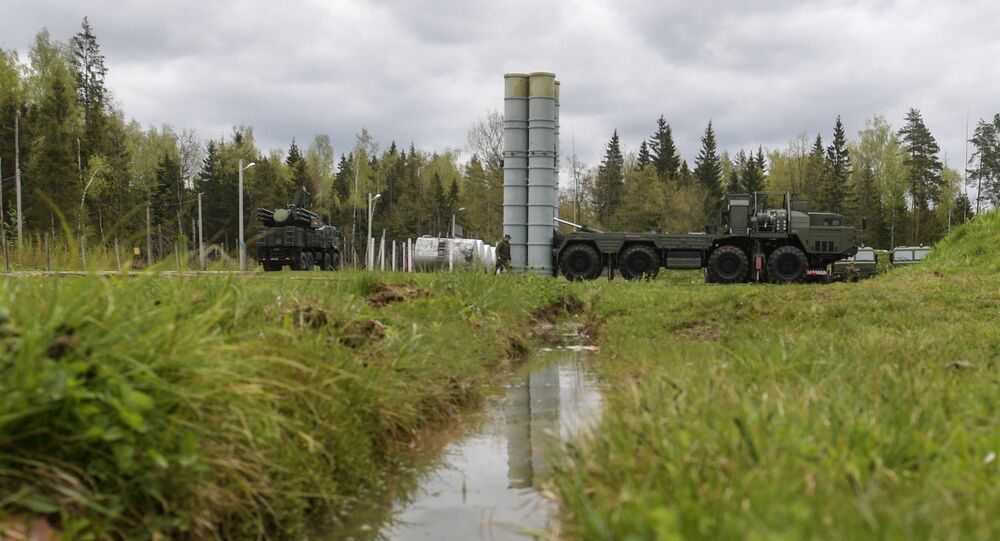 On Friday, Bloomberg reported that Turkey has agreed to pay $2.5 billion to acquire Russia’s most advanced S-400 missile defense system under a long-discussed deal. Russian political analyst Konstantin Makienko explained why, if completed, this deal will signify a "tectonic shift, game-changer" in the arms market.

"Turkey has agreed to pay $2.5 billion to acquire Russia’s most advanced missile defense system," Bloomberg reported on Friday, citing a senior Turkish official, who asked not to be named because of the sensitivity of the matter.

© Sputnik / Sergei Malgavko
Russia-Turkey S-400 Deal to Take on Western Policy of 'Chaos' in Middle East
Earlier in July, Vladimir Kozhin, Russian presidential adviser on military and technical cooperation announced that the contract on the delivery of Russian-made S-400 air defense systems to Turkey has been agreed, but there was still no decision on a loan Moscow can provide to Ankara for the purchase.

The negotiations on possible deliveries of S-400 systems to Turkey have been underway since 2016. In March 2017, CEO of Rostec Corporation Sergey Chemezov said Ankara was ready to buy the S-400 systems with a loan provided by Moscow.

On April 28, Turkish Foreign Minister Mevlut Cavusoglu said Moscow and Ankara had reached an agreement on the purchase of the S-400 air defense systems with the negotiations on joint production and prices already underway.

The issue was also discussed by Russian President Vladimir Putin and his Turkish counterpart Recep Tayyip Erdogan during their meeting in Sochi in early May.

Bloomberg's report now says that the preliminary agreement sees Turkey receiving two S-400 missile batteries from Russia within the next year, and then producing another two inside Turkey.

© AP Photo / Alik Keplicz
Turkey to Design Own Air Defense System With 2 NATO Members' Help After Buying Russia's S-400
On July 4, Turkish President Recep Tayyip Erdogan announced that Turkey would seek technological independence from defense imports and enhance its own defense production industry, based on the country's capacities and resources.

A spokesman for Russia’s arms-export company Rosoboronexport OJSC said he couldn’t immediately comment to Bloomberg on details of a deal with Turkey.

Bloomberg suggests that the deal "signals a turn away from the NATO military alliance that has anchored Turkey to the West for more than six decades."

"Turkey has been in NATO since the early years of the Cold War, playing a key role as a frontline state bordering the Soviet Union. But ties with fellow members have been strained in recent years, with Turkish President Recep Tayyip Erdogan pursuing a more assertive and independent foreign policy as conflict engulfed neighboring Iraq and Syria," it says.

Tensions with Washington mounted over US support for Kurdish militants in Syria that Turkey considers terrorists, and the relationship with the European Union soured as the bloc pushed back against what it sees as Turkey’s increasingly autocratic turn, it further suggests.

© Sputnik / Grigoriy Sisoev
Russia Sees No Obstacles to Arms Deliveries to Turkey - Deputy Prime Minister
The Turkish official explained to the agency that the Russian system would not be compatible with other NATO defense systems, but also wouldn’t be subject to the same constraints imposed by the alliance, which prevents Turkey from deploying such systems on the Armenian border, Aegean coast or Greek border.

The Russian deal would allow Turkey to deploy the missile defense systems anywhere in the country and against any threat without restriction, as they would not have a friend-or-foe identification system.

In his comment on the issue, Konstantin Makienko, an analyst at the Moscow think-tank the Center for Analysis of Strategies and Technologies, told Russia's online newspaper Vzglyad that Turkey might deploy one battery near the Bosphorus and the Dardanelles Strait, and the second one either near to Ankara or maybe deployed closer to the south-east, towards Syria and Iraq.

"It is a defensive system, but the deliveries of such systems have a very important meaning: they will close the Turkish skies, at least partially. And they will close it from the western-manufactured jets," the political analyst told the outlet.

In preference over the US and China

© Sputnik / Grigoriy Sisoev
Why Turkey is So Eager to Jointly Produce Russia's Advanced S-400 Systems
In October 2015, the US withdrew two of its Patriot missile-defense batteries from southern Turkey due "eased risk of Syrian Army missile attacks since the Patriots were deployed in 2013."

At the time, US officials said the anti-missile systems would be needed elsewhere to defend against "threats from Iran and North Korea."

At the same time Turkey was in active negotiations with China over the deliveries of its surface-to-air missile systems. Ankara then chose China's National Precision Machinery Import & Export Corporation for a deal on deliveries China's long range Hongqi-9 systems.

Ankara's original justification for choosing the Chinese system was that it was the cheapest, and also included the most generous offers of technology transfer, which would allow Turkey to acquire the blueprints for the system so that it could eventually build its own system.

But that decision angered Turkey's NATO partners, which objected that they couldn't integrate the Chinese system into NATO's larger air defense umbrella because it could compromise the security of NATO data. Many in China and Turkey complained that this was merely a pretext, and that Western governments were trying to bully Ankara into choosing a European system for commercial reasons.

© Sputnik / Grigoriy Sisoev
NATO Policy in Syria Prompts Turkey to Reach S-400 Deal With Russia
Under pressure from the US and NATO, Turkey then gave up its plan to buy the missile-defense system from the state-run Chinese company, in a deal valued at $3.4 billion.

"Taking this episode into account, the recent reports on Ankara's agreement to purchase Russia's advanced S-400 systems does not necessarily mean that they will be purchased. The two countries [Russia and Turkey] are still in negotiations. Until the contract is signed and starts to be implemented, we can't be sure of anything," Makienko told Vzglyzd.

The political analyst also noted that besides getting $2.5 billion, Russia will be able to load its production capacities. It will be of extreme importance after the end of the state-run program of armaments, the military reform program, which is set to expire in 2020.

© Sputnik / Dmitry Vinogradov
Why NATO 'Should be Glad, Not Critical' About Turkey Buying Russia's S-400
For Turkey, the key aspect of any deal is the transfer of technology or know-how, Bloomberg quotes the Turkish official as saying.

Turkey wants to be able to produce its own advanced defense systems, and the Russian agreement to allow two of the S-400 batteries to be produced in Turkey would serve that aim, the official said.

"There are a lot of different levels of technology transfer," and any offer to Turkey would probably be limited in terms of sophistication, Makienko said.

"For Turkey to be able to copy the S-400 system, it would have to spend billions to create a whole new industry," he said.

Searching for more reliable partners outside the alliance?

© Sputnik / Sergey Malgavko
Purchase of S-400 From Russia 'Might Signal Turkey's Estrangement From NATO'
In a separate comment on the issue, political analyst Kirill Koktysh, ‎Associate Professor at the Moscow State Institute of International Relations (MGIMO), told Vzglyad that the deliveries of such types of weapons are agreed upon only on condition of solid strategic reasons and a long-term plan for military cooperation.

'Turkey has a very low level of trust and hardly any strategic plans with Europe and the US. Turkey is searching for another strategic direction and more reliable allies, who will treat it with due respect and take into account its personal interests," the expert concluded.