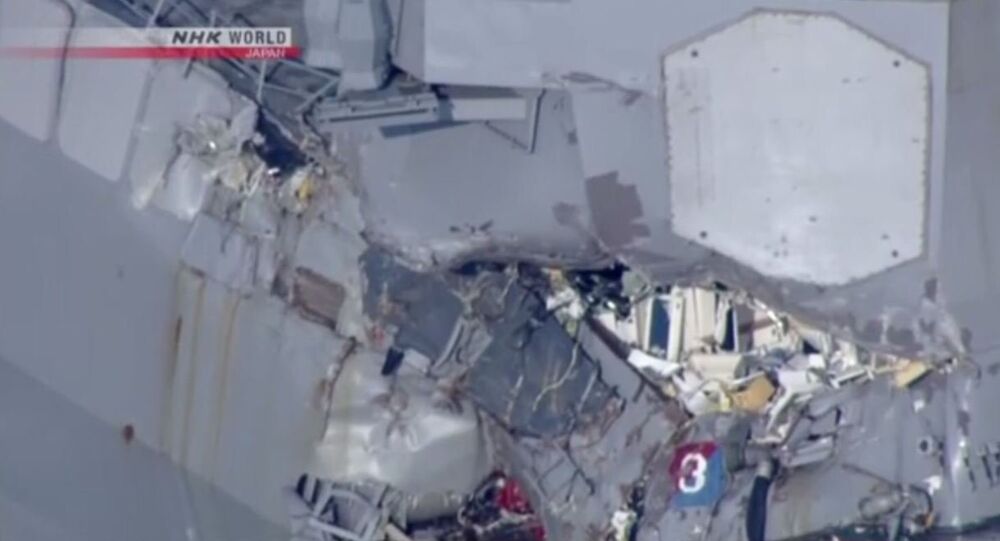 A former US Navy Captain and professor of maritime law has argued that the MV ACX Crystal container ship may be liable for its mid-June collision with the USS Fitzgerald destroyer – and if this proves to be the case, the parent company may be liable for as much as a staggering $2 billion.

Writing for Business Insider, Captain Lawrence Brenner, who now serves as an adjunct professor of law at Fordham Law School, argued that the complexities of maritime law, particularly in incidents involving naval vessels, could results in a massive payout from the ACX Crystal's owner, Japan's Dainichi-Invest Corporation.

It may prove cheaper to simply replace the Fitzgerald with a new ship than to undertake the extensive repairs needed. That would cost $2 billion. In addition, families of the seven US sailors killed in the incident may sue the ACX Crystal for damages; the surviving sailors may also sue the Japanese company, should they be found liable.

The June 16 collision between the two ships has been the subject of much scrutiny, but none of the involved parties have been forthcoming with information about the crash. American, Japanese and Filipino authorities continue to investigate, and electronic navigation tracking of the ACX Crystal's movements have been uploaded online. The Crystal suffered only minor damage, but the Fitzgerald was nearly destroyed, with a damaged hull and a broken keel. Electronics and communications gear was also damaged.

Brenner claims that Dainichi-Invest will likely not pursue a claim against the US Navy even if the Fitzgerald is found to be liable. As damage to the Crystal is a minor expense, the vessel''s owners would be better off trying to limit their own liability.

It may also be impossible for them to sue the United States due to the Public Vessels Act, which stipulates that if a US public vessel damages a foreign private vessel, the US is only liable if it can be proven that a US private vessel damaged by a foreign public vessel can sue that foreign power. No such precedent exists between the United States and the Philippines, under whose flag the ACX Crystal sailed.