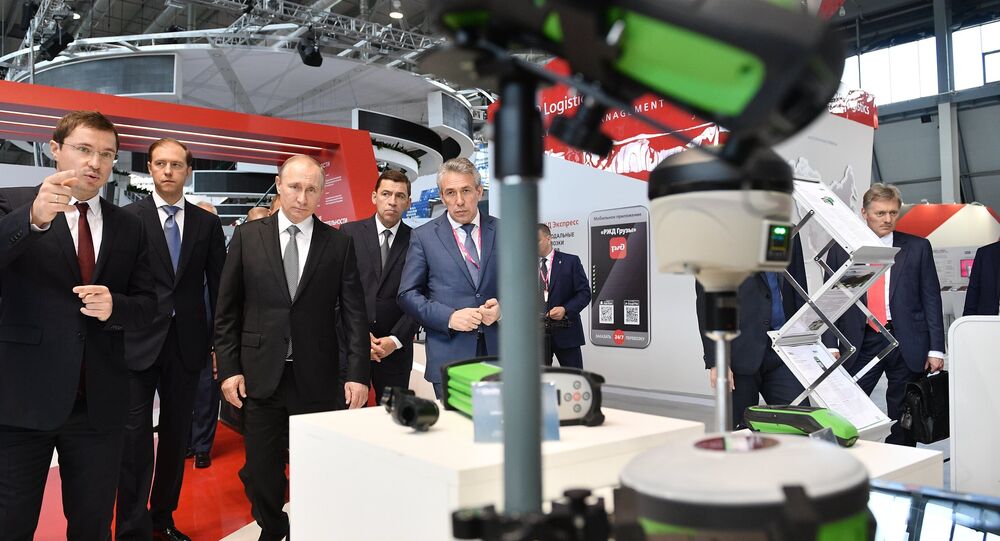 Russia’s city of Yekaterinburg is hosting the annual Innoprom industrial exhibition. The host region itself has always been known for its arms production, but with the development of state-of-the art civil products Russian manufacturers are planning to storm new markets.

It was built in the 1930s, but throughout its history, Uralvagonzavod has been making cutting-edge combat vehicles – from the legendary World War II T-34 tank, to the next-gen T-14 Armata. The machine building company is located in the heart of Russia’s industrial region near Yekaterinburg, in the Urals, and it is the largest main battle tank manufacturer in the world.

​Uralvagonzavod is one of the latest acquisitions for Russia’s Rostec Corporation. The state-owned technology conglomerate announced earlier this year that the merger is likely to precede a formation of an integrated armored vehicle business.

© Sputnik / Vladimir Astapkovich
T-14 Armata: The Russian Tank That Changed the Arms Market
Nevertheless, manufacturing tanks is not the field of work the Urals industrial giant. It’s also known for its civilian products, such as railway cars, agricultural machines and city trams.

Both the arms business and civil sector are important for Rostec, and the corporation is actively working on its conversion plan: it’s expected that by 2030 it will increase the percentage of its civil products in its line to 50 percent.

The corporation’s executives say that the global arms market is currently close to stagnation, and therefore, according to Rostec’s Director for Special Commissions Vasiliy Brovko, there is big potential in producing civil products, such as computers, machinery, and health care and communications equipment:

"When the state weaponry program ends, there will be a significant decline in State Defense Orders, which in turn will mean less jobs for enterprises of the military-industrial complex. At the same time, the share of Russian machinery and equipment exports in the overall export structure increased from 3.7 percent in 2014 to 7.3 percent in 2016. Thereby, we intend to reorient enterprises of the military-industrial complex toward civil products manufacturing."

© Sputnik / Vitaliy Timkiv
Russian Special Forces Mi-35M Helicopters Take Part in Drill
11
“Conversion” is one of the buzzwords at the Innoprom international industrial exhibition in Yekaterinburg – just over a hundred miles away from Rostec’s tank factory.

“Russian Helicopters” – also part of Rostec – is showing off its line of products at Innoprom – from the lighter “Ansat” chopper, to the updated version of the heavy Mil-26T2 – the largest transport helicopter in the world.

“At this exhibition we’re making an accent on the civilian use of our products,” says Andrey Shibitov, deputy CEO for production and innovations at Russian Helicopters. “You can also see our drones here. We are currently developing civilian models, which can be used to increase the efficiency of ice patrol missions, to guide ship caravans through the Northern Sea route, to perform ice reconnaissance near oil and gas rigs, which is important for their safety.”

Russian Helicopters showing off its VRT-300 drone at Innoprom. Rostec's subsidiary expects in-flight tests of the model in 2018. pic.twitter.com/RTGUA4vXOm

© Sputnik / Grigoriy Sisoev
Russia's Kalashnikov Concern Creates Combat Module Based on Neural Networks
​Russian Helicopters is not the only Rostec company that aims at increasing the sales of civil products. Russia’s Kalashnikov Concern,also part of the conglomerate, may soon resume the production of motorcycles at its Izhevsk factory.

Rostec was established in 2007 to facilitate the development, production and export of civilian and military products. It currently comprises more than 700 organizations, which are part of 11 holding companies.