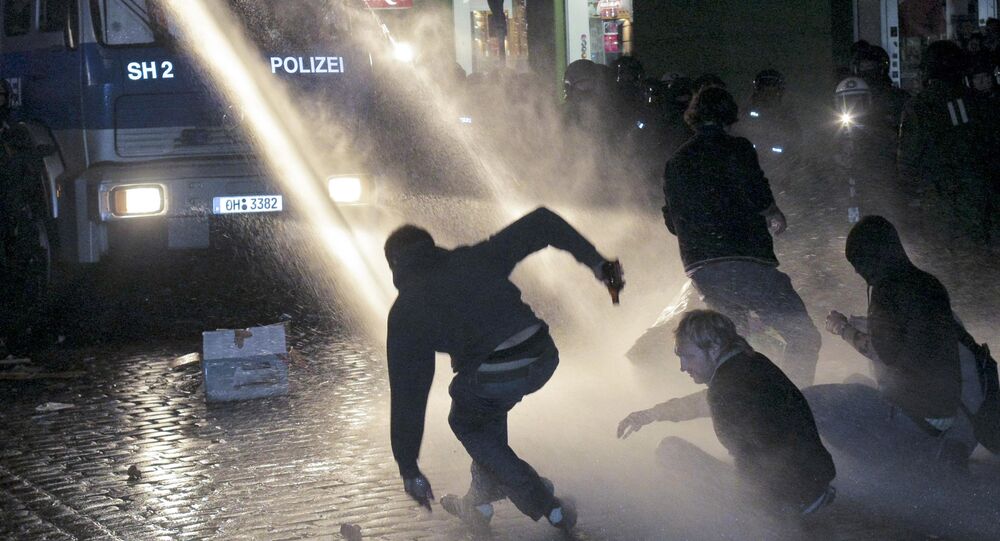 Estimates suggest some 100,000 flocked to Hamburg to protest the summit — and while initially proceedings advanced without incident, soon violent clashes erupted between protesters and police.

From then on, the skirmishes raged day and night over the course of the two-day summit, and did not relent even when the conference ended Saturday (June 8) evening. 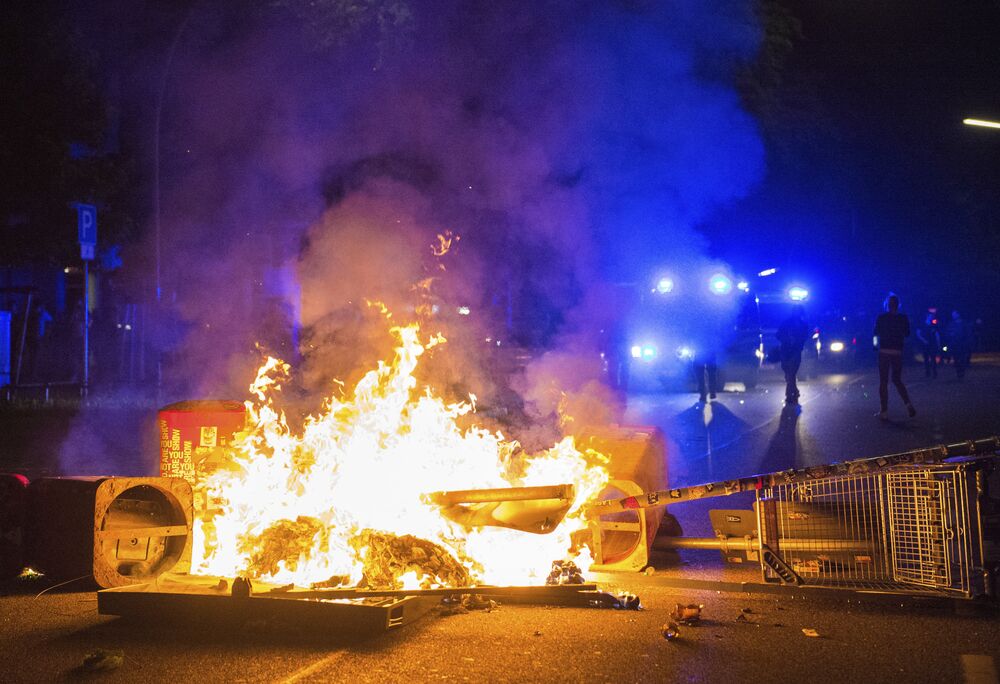 © AP Photo / Daniel Bockwoldt
Policemen stand behind a burning barricade in the so-called 'Schanzenviertel' area, on the sidelines of the G-20 summit, early Sunday, July 9, 2017, in Hamburg.

In all, 21,000 police — of which 500 were injured — patrolled the event, many of whom were bussed in from other European countries. In turn, dozens of protesters were injured and hundreds arrested — official figures on both counts have not been made available as of July 11, but medical support groups are said to have run dry of dressings for protesters' injuries.

Among the arrested was Italian Communist MEP Eleonora Forenza, who claims she was detained without stated reason en-route to the protest, had her documents seized and was forced to use toilet facilities with the door open while two officers watched.

Moreover, authorities are alleged to have attempted to locate activists from outside Hamburg and/or Germany, roaming hostels and train stations before, during and after the event.

It is perhaps the international character of the protests that inspired Minister Maas to call for an EU-wide database of "extremists."

"The large-scale disruption during the G20 meeting on July 7 and 8, which resulted in 411 police detentions, showed we do not have an adequate database in Europe in the area of extremism," Maas told local media.

Maas' proposals were quickly backed by Stephan Mayer, a Bavarian Christian Social Union legislator, who said a database was "sensible and worthy of support" as it would enable authorities "to get a better overview" — refusing entry to potential troublemakers at the country's borders.

"There is a very active left-wing extremist scene in Germany, but also in other European countries. Controls at Germany's external borders introduced as part of the G20 should continue," he added.

National lists of potential protest firebrands exist the world over, with varying degrees of controversy. In the UK, it has been revealed authorities maintain a recognition guide, a photographic list of protesters for ease of identification at major demonstrations and the like.

However, as far as the public know, no comparable document exists for use Europe-wide. That's not to say such a resource hasn't previously been mooted — in fact, Maas' comments arguably represent an effective reheating of long-held European Union aspirations.

As far back as 2001, similar plans were discussed — and rejected — but they have resurfaced almost annually. Most significantly, in 2009, under Sweden's EU Presidency, the European Commission funded a study to determine a unifying, pan-EU legal definition of several key terms, as a prelude to the creation of just such a database — extremist, suspected troublemakers and potential troublemakers.

The outcome of the study is publicly unknown, although the same report stated Germany's definitions of the term could potentially be universalized — individuals are marked as potential hostile elements if they are "suspected, accused or convicted" of a "significant" criminal offense.

Such offenses include; coercion; aiding and abetting the escape of a prisoner; material damage to property; serious trespass; breach of the public peace; formation of or participation in an armed group; formation of or support for a criminal or terrorist organisation; robbery; arson; causing an explosion; breach of the laws on weapon; incitement to hatred (insofar as the nature of the act clearly shows that the perpetrator is liable to be violent.

While few may quibble at the prospect of convicted arsonists being banned from attending large-scale protests, the broad nature of these offenses, and indeed the stipulation an individual need only be suspected or accused (by whom in either case is unclear) of these offenses, are both potentially troubling aspects of the definition.

In any event, the EU already has in place a number of procedures for the bilateral exchange of information and intelligence, which both national and supranational forces (such as Europol) can make use of — begging the question of whether a "troublemaker" database is a necessary investment. Moreover, the prospect individuals on the database being restricted from entering particular countries at particular times by definition infringes strongly on the notion of freedom of movement, an apparently fundamental EU value. It may be that Maas' proposal is simply unachievable — for the time being at least.