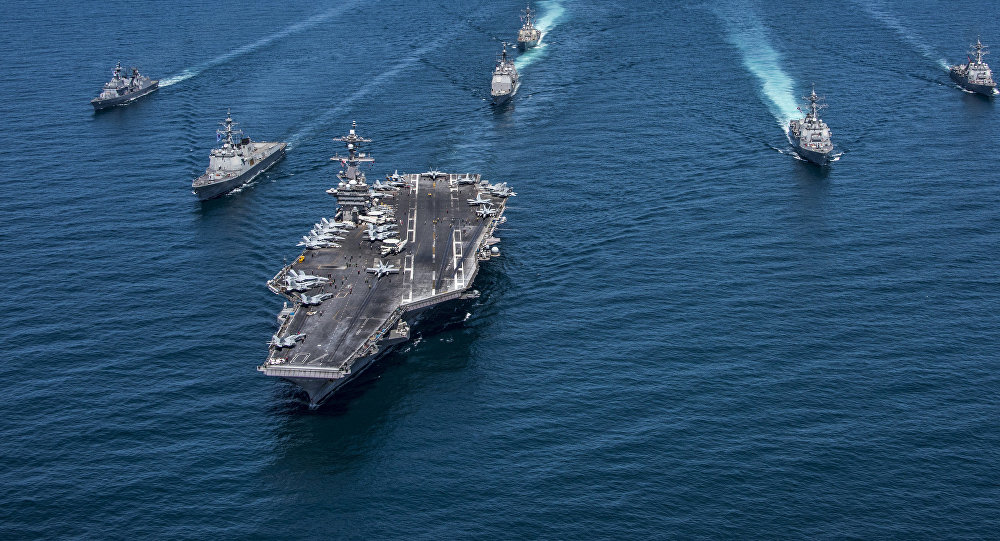 The US Nimitz Carrier Strike Group arrived in India for war games with the Japanese and Indian navies known as Malabar 2017, the US Navy announced Monday.

"I would like to say this is a strategic message to China," US Navy Cmdr. Rear Adm. William Byrne told reporters.

"Malabar 2017 is a trilateral, two-phase exercise hosted by the Indian navy and held in Chennai and the waters of the Bay of Bengal," a Navy release stated.

The US Navy explained Malabar 2017 is part of ongoing joint exercises involving the US that started in 1992 to address shared threats to maritime security in the Indo-Asia Pacific.

"Exercises such as this allow for practical training while exchanging skills, strengthening bonds and personal relationships and increasing understanding of multinational operations," US Navy Capt. Christopher Alexander said.

The three navies will perform maritime patrol and reconnaissance operations, surface and antisubmarine warfare, medical operations, damage control, helicopter operations, and visit, board, search and seizure operations, according to the release.

The Nimitz group is operating in the Navy's 7th Fleet area of operations, which covers 48 million square miles of the Pacific and Indian Oceans, from the International Date Line to the India-Pakistan border and from the Kuril Islands in the north to Antarctica in the south.

The navy exercises occur as violence has broken out between India and China in the contested region of Sikkim, though India Commander-in-Chief of the Eastern Naval Command, HCS Bisht, told NDTV the skirmish "has nothing to do with Malabar Exercise."

The drills will promote interoperability, mutual learning, and sharing of best practices, he added.