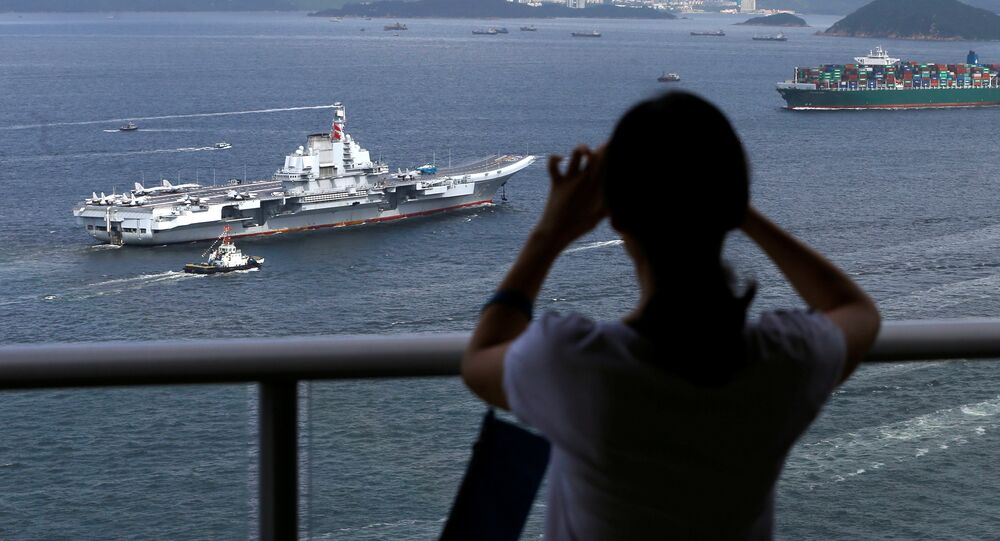 Commenting on the People's Liberation Army Navy's growing presence in the world's oceans, Russian military observer Alexander Khrolenko notes that China's activities are making it more and more difficult for the US to use its main military advantage: its global naval hegemony.

On Friday, as part of the joint US and Japanese exercises, two US Air Force B-1B bombers flew over disputed airspace in the South China Sea. A US Air Force statement said that the flight was intended to demonstrate the "rights of freedom of navigation anywhere international law allows."

The Chinese Foreign Ministry denounced the flight, saying that China was "adamantly opposed to acts that undermine China's sovereignty."

© AFP 2021 / ARIS MESSINIS
US Bombers Buzz South China Sea as Trump and Xi Prepare For G20 Meeting
Last week, China accused the US of a similar violation of sovereignty and international law after a US destroyer entered the waters around the Xisha (Paracel) Islands. In that incident, the USS Stethem was met by Chinese warships and fighter jets, which the Foreign Ministry said were deployed "to warn off" the offending US vessel.

Following both incidents, Chinese officials stressed that China was monitoring the "relevant countries' military activities," and would take "resolute" measures to defend its sovereignty and security.

Commenting on Friday's incident in an analysis piece for RIA Novosti, military affairs journalist Alexander Khrolenko suggested that both US behavior and the Chinese response were "not accidental."

"The Chinese Navy is exploring more the near and distant regions of the world's oceans, and that means that it's time for Washington and the Pentagon, who until recently confidently controlled almost all the important sea routes and disparaged the Chinese Navy, to be nervous," Khrolenko wrote.

On Friday, China's first aircraft carrier, the Liaoning, accompanied by three other Navy ships, arrived in Hong Kong Harbor to participate in the 20th anniversary celebrations of the transfer of the former British colony to the People's Republic. Ahead of the anniversary, Chinese President Xi Jinping warned that any attempts to separate Hong Kong from the mainland China be absolutely unacceptable, adding that China would defend its sovereignty over the territory by all necessary measures.

Friday's port visit, Khrolenko noted, "could be viewed as a continuation of Xi Jinping's thoughts, and as a projection of naval power based on the 'One Country, Two Systems' principle. The clean lines of a warship can convince others of the strength and capabilities of the country better than words alone."

© AFP 2021 / POOL / Guang Niu
New Breakthrough Chinese Submarine Tech Changes Balance of Power in Asia-Pacific Region
China launched its first domestically-built Type 001A carrier in April 2017. A modernized design of the Soviet-Russian Kuznetsov-class carrier, the Chinese carrier is 315 m long, 75 m wide, displaces 70,000 tons, and has a cruising speed of 31 knots. Liaoning's air group consists of 24 fighters. As for the Type 001A, that carrier is expected to carry up to 36 Shenyang J-15 fighters. China plans to put a third carrier into operation in the next three years. Ultimately, China plans to create a total of six carrier battle groups, along with a series of naval bases around the globe.
© AP Photo / Xinhua, Zha Chunming
In this undated photo released by China's Xinhua News Agency, a carrier-borne J-15 fighter jet lands on China's first aircraft carrier, the Liaoning

Last month, the Chinese Navy surprised observers after two of its ships, the missile destroyer Changsha and the missile frigate Yuncheng, entered the Baltic Sea to participate in the Joint Sea 2017 drills with Russia. In addition to the Baltic, joint drills are also being carried out in the Sea of Okhotsk and the Sea of Japan this year.

© AP Photo / Arun Sankar K.
War Games: China Fumes at US, India, Japan Joint Naval Exercises
China's Xinhua news agency said that the exercises were meant to "strengthen and expand the strategic partnership and cooperation between China and Russia, and to deepen the friendship and substantive cooperation between the two countries' navies."

"And this cooperation is by no means just symbolic," Khrolenko stressed. "Chinese media maintain that the state-of-the-art multirole destroyer Changsha is 'one of the best in the world', and the largest ship in the Chinese Navy, not counting carriers."

The Russian and Chinese navies have insisted that the main purpose of their Baltic Sea maneuvers is 'joint rescue operations and ensuring the safety of economic activity at sea.'

Nevertheless, Western news media, not used to powers other than NATO carrying out drills in the region, issued dire warnings on the maneuvers' real implications. Newsweek sounded the alarm with the ominous headline 'Russia and NATO War Games in Europe See New Player: China." France's L'Opinion offered a similarly grim headline, which read "China and Russia Challenge NATO in the Baltic Sea." The MSM declared that such exercises, near the heart of Europe, were meant to send a message to Washington and to NATO – that Russia and China support and protect one another.

In reality, Khrolenko noted, Russian and Chinese sailors have conducted many similar exercises in recent years, in the Mediterranean, the Pacific, and other parts of the world, and none of them have been aimed at 'threatening' any country or alliance.

When it comes to the Asia-Pacific Region, the analyst suggested that the crux of the problem comes down to the fact that the US, mindful of China's steady economic rise, is weary to see its strength gradually transform into political and military influence as well. Washington's problem, Khrolenko added, is that there are not so many economic and military instruments with which they are able to influence Beijing.

"China is rapidly developing its defense capabilities, updating the Navy's complement of ships, and its Air Force's combat fleet. And although until recently, the region was dominated by the US military, the Pentagon believes that China plans to eventually neutralize the US military technical superiority," Khrolenko wrote.

"The stakes are high," the analyst stressed. "75% of the supply of crude oil from the Middle East to the Asia-Pacific Region comes through the South China Sea (including over 40% of China's total consumption). The annual volume of regional maritime trade is estimated at $5 trillion, $1.2 trillion of which is US trade operations. These figures help explain the nature of the dispute between Beijing and Washington, and each country's concerns for shipping."

Ultimately, Khrolenko noted that the continued development of the Chinese Navy will become a necessary condition to its economic growth — since only this can ensure the uninterrupted supply of hydrocarbons from North Africa and the Middle East. The shelf of the South China Sea itself is rich with oil and gas fields, which China is consistently exploring and developing.

In any case, the analyst wrote that, "sooner or later, the Americans will have to make room, both in the Asia-Pacific Region, and in the world oceans," for a new power: China.