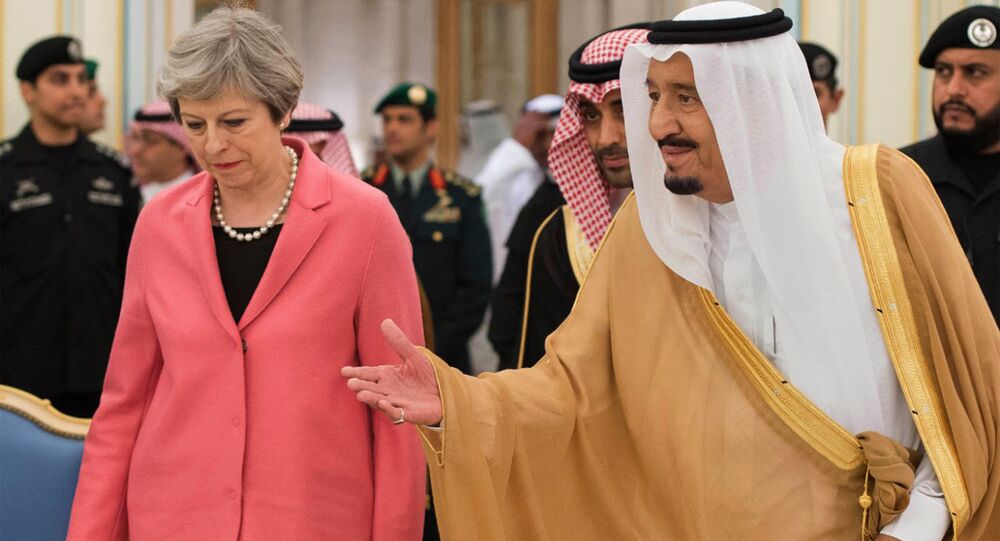 UK Prime Minister Theresa May has said she intends to make severing terrorist funding sources the centerpiece of the G20 – despite seeking ever-closer ties with key terrorism financier Saudi Arabia, and questions hovering over her potential role in the dispatch of Libyan exiles to topple Muammar Gaddafi in 2011.

Speaking ahead of the weekend summit in Hamburg, May said the terror threat was "evolving" — and she would urge the international community to be as tough on sponsors of terrorism as terrorists themselves.

"We have seen the threat spread out of Syria and Iraq — into other countries and online. As we deny physical space to terrorists to operate, we must outpace terrorist methodology as it develops to attack other vulnerable targets and increases inspired attacks. This includes taking measures against permissive environments for terrorist financing, and monitoring the dispersal of foreign fighters from battle," she added.

Also attending the G20 are representatives of the House of Saud — if and when May makes her major terrorism funding push at the conference, they may well wish they were somewhere else. However, it's unlikely the Prime Minister will be impassionedly raising the issue with them directly — in Hamburg or elsewhere.

After all, a mere three days before the July 7 conference kicked off in earnest, May enjoyed a warm and fawning phone call with HRH Mohammed bin Salman, the Crown Prince of Saudi Arabia, in which she said she looked forward to further deepening the two countries' already "close" bilateral ties — building on their "productive" meetings during her recent visit to Riyadh, which confirmed the pair's "strong and historic" partnership.

Indeed, such is May's desire to maintain the UK's intimate affiliation with the oil-rich Gulf plutocracy, the prime minister has blocked the publication of a report into foreign funding of terrorism, which potentially focuses largely on Saudi Arabia's financing role, commissioned in 2015 as a condition of Liberal Democrat support for supporting bombing in Syria.

While completed long ago, its embarrassing, sensitive contents have dangerous implications for the Kingdom's international legitimacy.

Soon to be ex-Liberal Democrat leader Tim Farron has suggested May should raise the issue of funding for extremism in direct bilateral talks with Saudi Arabia at the conference — although as with so many of his statements, this entreaty may fall on deaf ears.

"If the Prime Minister was truly serious about this agenda she would release the report into foreign funding of UK based extremism and stop kowtowing to Saudi Arabia. Nations like Saudi are key exporters of extremist ideology around the world and yet we look the other way in exchange for massive arms deals. The Prime Minister can lecture banks or other leaders as much as she likes on what they should do, but she should get her own house in order first. She is a hypocrite," he said.

Theresa May is officially one of the most unpopular world leaders. Home and abroad — YouGov poll finds. #ToriesOut https://t.co/EntohbjsE7 pic.twitter.com/I0zjq7putj

However, May hasn't been able to suppress a Henry Jackson Society report, published July 5, which palpably demonstrated the "clear and growing link" between Islamist extremists and Saudi Arabian petrodollars, and the country's long running history of exporting extremist Wahhabi ideology to the West.

Moreover, May was Home Secretary concurrently with the UK government operating an "open door" policy allowing Libyan exiles and British-Libyan citizens to join the 2011 civil war that toppled leader Muammar Gaddafi, even though some had been deemed security threats. The father of Manchester attack bomber Salman Abedi was among them — Salman himself may have been too.

Several rebel fighters were able to travel to Libya "no questions asked" — and believe their voyages were actively facilitated by authorities.

Many had been subject to controversial "control orders" — effectively house arrest — introduced under counterterrorism legislation passed following the 2005 London bombings, but these were lifted rapidly after the "civil war" began in Libya.

As the Home Office is the authority in charge of issuing — and lifting — control orders, it is perhaps inconceivable May wasn't at least aware of the policy.