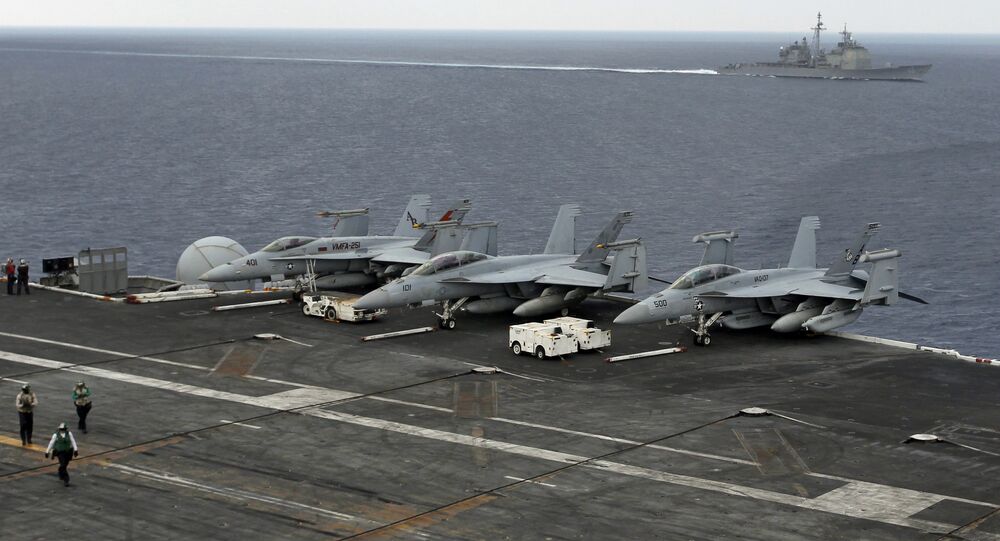 Indian, Japanese and US maritime forces and naval ships will participate in this year's Malabar exercise, slated for July 7-17, according to the statement of the the Public Affairs Office of the US Embassy in New Delhi.

© Photo : YouTube/Youtupe Mania
US Kicks Off Navy Drills With Vietnam After Beijing Slams 'Serious Provocation' in South China Sea
NEW DELHI (Sputnik) — Aircraft, naval ships and military personnel from the United States, India and Japan will take part in this year's Malabar exercise, slated for July 7-17, the Public Affairs Office of the US Embassy in New Delhi said in a press release on Thursday, stressing that the drills would include both ashore and at-sea training.

© Sputnik / Evgeny Biyatov
US Set to Conduct Multinational Military Drills in Tajikistan - CENTCOM
The US Embassy specified that Japanese would be represented by Maritime Self Defense Force ships JS Sazanami and JS Izumo. As for India, the Indian Navy Headquarters should be contacted to receive the list of Indian forces taking part in the drills.

"Indian, Japanese and U.S. maritime forces have a common understanding and knowledge of a shared working environment at sea. Each iteration of this exercise helps to advance the level of understanding between our Sailors, and we hope to be able to continue this process over time," the Public Affairs Office added.

According to the press release, the exercise, the primary goal of which is to address maritime threats to security in Indo-Asia Pacific, will feature both ashore and at-sea training, including exchanges on carrier strike group and reconnaissance operations, maritime patrol and damage control.

The Malabar exercises were initially set as a joint Indian — US naval drill in 1992, with Japan joining in 2015.

US Set to Conduct Multinational Military Drills in Tajikistan - CENTCOM