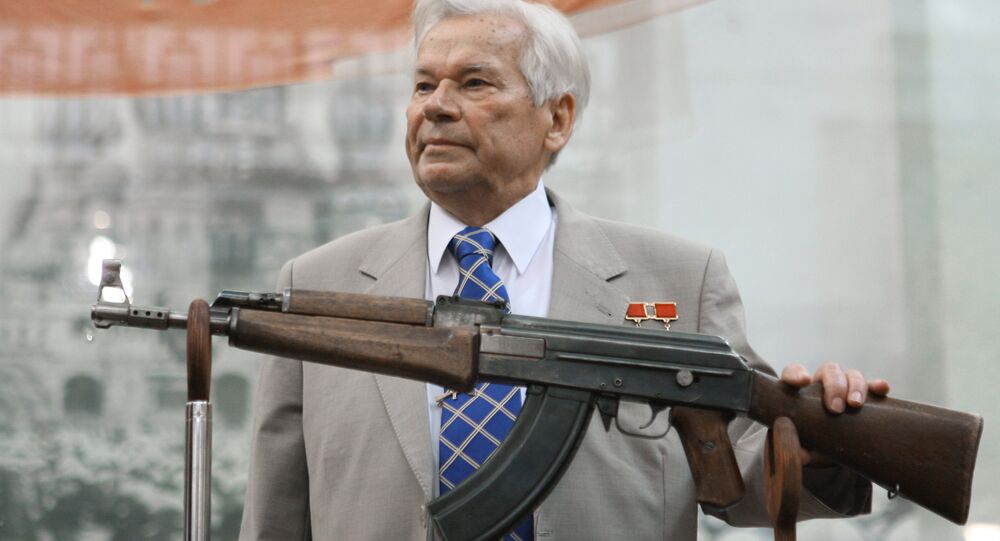 'The Weapon All Fighters Love': The Famous AK-47 Celebrates Its 70th Birthday

On July 6, 1947, the AK-47 went into production for the first time. The brainchild of self-taught inventor and Red Army Lieutenant General Mikhail Kalashnikov, it was one of the world's first operational assault rifles – and as of 2017, it remains the world's most popular, accounting for around a fifth of the firearms in circulation globally.

The AK-47's origins date back to the October 1941 Battle of Bryansk, a 20-day skirmish between Nazi Germany's Wehrmacht forces and the Soviet Union's Red Army.

The little known conflict was part of Operation Barbarossa, Germany's attempt to conquer the western Soviet Union — and it ended in a resounding defeat for the Red Army.

Thousands of Soviet soldiers were wounded in the fighting — among them Mikhail Kalashnikov, then Senior Sergeant in the 24th Tank Regiment of the 12th Tank Division.

Despite his injuries, Kalashnikov valiantly made it to the nearest hospital on foot. While recuperating, he heard his ward comrades complaining about the poor quality of the small arms they were issued with — and was plagued at night by vivid nightmares of the Bryansk battle. Quickly, he became determined to create an effective submachine gun that would drive the invading Germans from his beloved homeland.

​After making a full recovery, Kalashnikov was assigned to the Red Army's design directorate, where he spent the rest of World War Two trying to develop his dream weapon. However, it was not until after the war that his groundbreaking innovation was finally minted.

The AK-47 — Avtomatni Kalashnikova model-1947 — was the culmination of an evolutionary process, and represents the crowning achievement of Kalashnikov's career. For his work, he was twice named "Hero of Socialist Labor" — the Soviet Union's highest distinction — among a deluge of other honors.

© Sputnik / Evgeny Biyatov
Kalashnikov mount displayed at the Russian Defense Ministry's Innovation Day 2015 exhibition, on the premises of the congress and exhibition center of the Russian armed forces in Kubinka, Moscow Region.

Quickly appreciating its stunning capabilities, the Red Army adopted the rifle as its standard infantry weapon in 1949, and it became standard issue for all Warsaw Pact nations too.

The genius of the AK-47 lies in its simplicity. Eschewing bells and whistles, once loaded with 7.62mm rounds, users can switch between automatic and semi-automatic, and shoot stably and effectively.

Cheap to manufacture, extremely durable and the epitome of reliability, its appeal quickly spread beyond the former Eastern Bloc. American troops fighting in the Vietnam War, equipped with jamming-prone M16s, were blown away by the AK-47, often nabbing the rifle for themselves from captured or killed Vietnamese troops.

Moreover, revolutionaries from Cuba to Angola to Vietnam, struggling to liberate their homelands from the yoke of imperialism, clamored for the weapon — and the Soviet Union was happy to oblige.

Over its 70-year lifespan, the AK-47 can claim to have powered some of the most dramatic revolutions of the 20th century. The rifle features prominently on the flag of Mozambique and the nation's emblem — recognition the country gained independence from Portugal in large part via the weapon.

As of 2017, militaries in 106 countries around the globe from Afghanistan to Zimbabwe are now equipped with AK-47s.

The weapon features prominently in the 2005 film Lord of War. In it, protagonist Yuri Orlov, played by Nicolas Cage, sums up its appeal succinctly.

"The AK-47 or Kalashnikov [is] the world's most popular assault rifle — a weapon all fighters love. An elegantly simple nine pound amalgamation of forged steel and molded plastic, it doesn't break, jam or overheat. It will shoot whether it's covered in mud or filled with sand."

Such comments are echoed by David Dyson, independent firearms expert.

"The fact it has endured for such a long time and is still the most common weapon of its type in the world tells you all you need to know about its design — it's lasted the test of time. It's a very reliable weapon, highly resistant to abuse. While many things can jam rifles, the AK-47 will carry on firing. There are many reasons why other weapons aren't quite as common as the Kalashnikov," Mr. Dyson told Sputnik.

Lord of War isn't the only movie starring the rifle — and the AK-47's cultural reach extends far beyond film.

References to AK-47s — both positive and negative — are rife in popular music, particularly rap. Debate abounds about the first group to mention the rifle, although it may well have been NWA's landmark 1988 cut Straight Outta Compton.

Kalashnikov, who passed away in December 2013, aged 94, remained extremely proud of his creation to the last. While expressing sorrow about is proliferation into the wrong hands, he made clear he felt no guilt.

"If someone asks me how I sleep at night knowing, I respond that I have no problem sleeping. My conscience is clean. I constructed arms to defend my country," he said.

Oldie but Goodie: Little Things That Keep AK-47 on Top of the World

'Anyone With AK-47' Can Overmatch US Soldier in Fire Fight