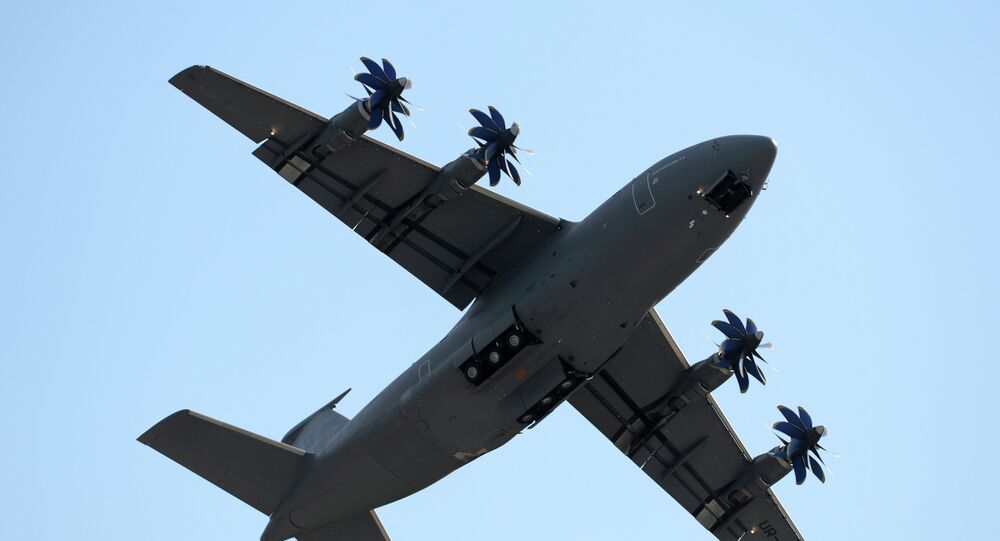 Ukraine's Antonov aircraft company has offered to cooperate with US manufacturers to create a new medium lift military transport aircraft. Speaking to Sputnik, military expert Dmitri Drozdenko explained why, Antonov's long and proud history notwithstanding, its proposal will almost certainly be of no interest to the Americans.

Antonov State Company announced its readiness to work with US companies on the creation of a new plane during a visit to its offices by a delegation of representatives of the US House Committee on Transportation and Infrastructure earlier this week. Specifically, the company proposed the joint development of the Antonov An-77 – a 'westernized' upgrade of its An-70 four-engine medium-range transport aircraft.

© Sputnik / Vladimir Lavrov
Russia to Phase Out An-148 Jet Production After Completion of Two Aircraft
Explaining that it was prepared to work with US aircraft makers on the project, the company added that the signing of a Bilateral Aviation Safety Agreement between Ukrainian and US aviation authorities would be necessary before any joint program could move forward.

The development of the An-70 began in the late 1980s, with the plane meant to complement the Ilyushin Il-76 (which, depending on the variant, has a maximum payload of between 42 and 60 tons). Throughout its development, the An-70 was accompanied by a series of unhappy incidents. Three months after its maiden flight in December 1994, the plane's single prototype was lost in a mid-air collision with a chase plane, killing its seven-man flight crew. The crash was blamed on human error. The company began testing of a second prototype in the late 1990s.

The An-70 was meant to become a workhorse for the Ukrainian and Russian militaries, with Russia contributing over 60% of the $5 billion invested into the project between the 1990s and the mid-2000s. As time wore on, the Russian military began marking concerns with the program, and ultimately decided against using the An-70 as its medium strategic airlifter.

© AFP 2020 / SERGEI SUPINSKY
Breach of Moscow-Kiev Ties Destroyed Ukraine's Defense Industry Enterprises - Putin’s Aide
In the late 1990s, Antonov also flirted with the creation of a special version of the plane for the German Defense Ministry, known as the An-7X; however, Berlin too eventually backed out of the project, and went with an Airbus plane instead.

Speaking to Radio Sputnik, Dmitri Drozdenko, a military observer and contributor to Arsenal of the Fatherland – a Russian military publication, suggested that like their Russian and German counterparts, US aircraft manufacturers will also be unlikely to show any real interest in the An-77 project.

"A delegation from the US Congress visited the Antonov factory, but I don't think American business is at all interested in this plane, the same as European business. The reason for this is that this aircraft would be a direct competitor to both America and the European Union," the expert noted.

In Drozdenko's estimation, whatever concessions Kiev might make to try to convince US companies to join the project, they won't be enough.

"Ukraine today is concerned not so much with the economic properties of business as with politics. I believe that the task of the current government is to destroy industry in the country as much as possible –including the famous Antonov Design Bureau. It has already factually 'gone under the knife'. It's enough to consider how the management has changed, what planes are produced. Antonov is rushing around, trying to offer its products to the Arabs and to others. But no one needs them. This plane [the An-70] was needed by Russia as a medium transport. But Russia got out of that situation, upgrading the Il-76, and Antonov, with a good plane, is left with no prospects."

© RIA Novosti . Yuriy Korolev
The Tragic Fate of Ukraine's Antonov, Once a Legendary Name in Global Aeronautics
Antonov, once a legend of global civilian and military aviation, has faced tough times ever since the collapse of the Soviet Union, and especially in the last three years following the rupture in Russia-Ukraine ties. Producing over 22,000 aircraft since its founding in 1946, the company reached a low point last year, failing to produce even one aircraft in 2016. The year before that was little better, with the company building just two regional jet airliners.

The company's most famous aircraft include the An-124 Ruslan and the An-225 Mriya ('Dream') heavy and super-heavy lift transport planes. The latter is famed for having the largest wingspan of any aircraft in operational use, and for having been used to piggyback the Buran, the USSR's answer to the US Space Shuttle program. Antonov sold the Mriya's technical documentation to China last year.

'The Potential is Zero and There's No Money': Ukraine Can't Create Its Own Plane