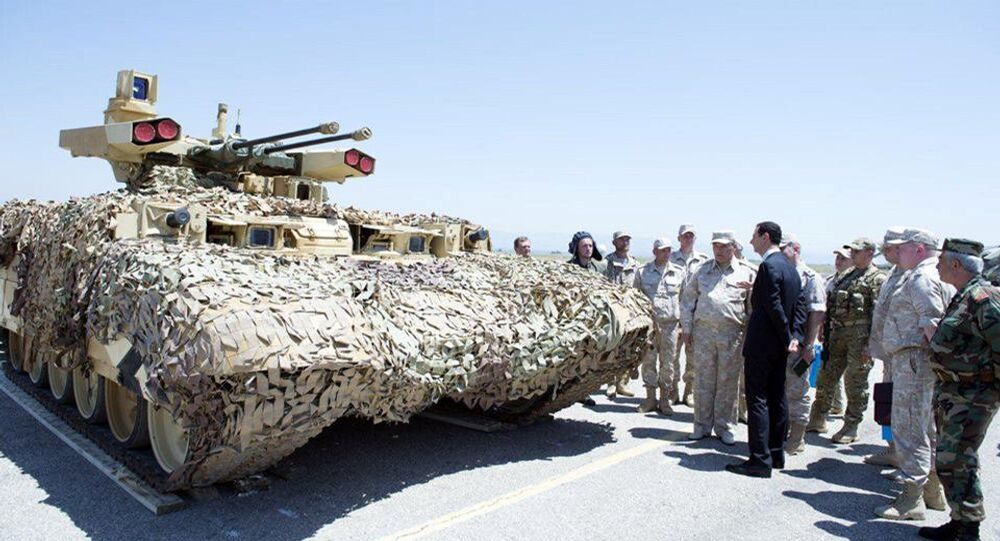 One of Russia’s most advanced weapons, the BMPT-72 "Terminator 2" combat machine, has been spotted at the Hmeymim airbase in Syria.

© Sputnik / Vladimir Astapkovich
Russia's 1st Tank Army Receives New Batch of Modernized T-72B3 Tanks Showcased at Military Parade
It was demonstrated for Syrian President Bashar Assad by Russian Chief of General Staff Gen. Valery Gerasimov during Assad’s visit to the military site. A guided tour was organized during which the Syrian President had the chance to see some of the military hardware Russia used in the Syrian campaign.

The pictures released after Assad’s visit to Hmeymim show the latest version of the BMPT-72 in desert camo, partly covered with a camouflage net. Apparently, the machine is part of the Russian forces involved in protecting the base, alongside T-90 tanks.

​The Syrian campaign is the first combat voyage for the "Terminator 2." Its prototype was built back in 2001, but for many years the Russian Defense Ministry could not decide upon which role it could play in serving the armed forces. Experts suggest that the mission in Syria will put the new combat machine to test and its results will define its future.

© Photo : Ministry of Defence of the Russian Federation
Russian Arms, Hardware 'Show High Combat Capabilities' in Syria
Different combat operations, including the war in Afghanistan, revealed that tanks are extremely vulnerable to grenade launchers and anti-tank missile systems. As a result, the BMPT — Boyevaya Mashina Podderzhki Tankov (Tank Support Fighting Machine) – was designed by Russia’s defense company Uralvagonzavod as a versatile and mobile weapon for protecting tanks. According to the initial conception, vehicles of this type should be used alongside tanks on the battlefield and destroy any potentially dangerous target.

As a result, the BMPT is filled to the brim with different types of weapons. Its main armament is the 2A42 30-mm twin automatic cannon with 900 rounds of ammunition. In addition, there is a PKT 7.62-mm machine gun in the turret. The BMPT also carries four launchers for 9M120-1 (or 9M120-1F/4) guided anti-tank missiles, capable of hitting their target at a distance of up to six kilometers. Moreover, there are two AG-17D automatic grenade launchers. The vehicle is based on the T-72 tank chassis and has a crew of three servicemen.

Initially, BMPT machines were slated to join the Russian Army in 2010, but it did not happen at the time. Despite the fact that the Russian Defense Ministry had a number of issues with the BMPT, the concept was not abandoned.

© Sputnik / Mikhail Klementiev
Best of the Best: Military Hardware Showcased at Victory Day Parade in Moscow (PHOTO, VIDEO)
At the same time, he noted, that the appearance of the "Terminator 2" in Syria is logical. In the beginning of the year, the Defense Ministry said that samples of nearly 160 weapons were tested in the Syrian campaign.

According to Murakhovsky, the vehicle photographed at Hmeymim is the only existing fully operating BMPT-72 "Terminator 2" so far.

"It is reasonable that the military wants to put it to the test in real combat missions, including in urban areas. Without such tests, it is impossible to determine its efficiency. Only combat experience can decide whether the army needs the 'Terminator' or not," the expert told Sputnik.

Despite the fact that the future of the "Terminator" in the Russian Army remains uncertain, its technology is likely to be used to develop a brand new tank support fighting machine.

In 2016, Uralvagonzavod CEO Oleg Sienko told Sputnik that the company developed the conception of combat vehicles based on the Armata tank platform, including a new BMTP. It is expected to receive a more powerful armament as well as advanced targeting and communications systems.