The Pentagon uses a vast array of techniques to train its employees, and recent revelations show that the aesthetics of mid-20th century television game shows are now in play as well.

US Special Forces, including Army Green Berets, Delta Force soldiers and Navy Seals, use a modified version of television's long-running Jeopardy and $25,000 Pyramid game shows to train their new hires, according to a report by The Intercept.

The US Special Operations Command, which trains the above-mentioned special forces teams, operates the Joint Special Operations University (JSOU) at Florida's MacDill Air Force base, and uses only the most cutting-edge techniques that make the elite squads, well, so awesomely elite.

The JSOU's mission, in standard military-speak, "is to educate SOF executive, senior, and intermediate leaders and selected other national and international security decision makers, both military and civilian, through teaching, outreach, and research in the science and art of joint special operations," according to the JSOU University Press, but that hardly tells the whole story.

The school provides some deep curriculum, including "Strategic Utility of Special Operations," "Covert Action and SOF Sensitive Activities," and — this is the important one — "Introduction to Special Operations Forces."

The purpose of the JSOU in providing these deep intellectual dives, according to a Special Operations Command spokesman, "is to educate the student about the core activities, primary functions, organizations, capabilities, and doctrinal employment of US Special Operations forces along with key concepts and terms," cited by The Intercept.

The third of the three above-mentioned courses, "Introduction to Special Operations Forces" purports to provide the basics of special ops, but not in the application of camouflage makeup, the field dressing of wounds or rappelling down cathedral abutments.

The introductory course instead offers what it considers to be thoughtful discussions on risk, visibility and how conventional military missions differ from those of the elite — and they do it with all the class of a bell-bottomed late-70s television game show host.

While much of the methodology of the special forces groups is known, including deployments (after the fact, of course) and weaponry, what remains hidden is who, and how, the use of proxy television game shows was inculcated as a means to make our best and brightest what they are today.

"We do not," the spokesperson was documented as explaining to the The Intercept, "have the information about who created the course, when it was created, how much it cost, or how many have used it."

The Intercept was able to acquire a copy of "Introduction to Special Operations Forces" by using a Freedom of Information Act request, and the authors of the report found that video game demonstrations used within the course were not only odd, but regularly silly.

In one rudimentary quiz show — made to look like Jeopardy — the content offered science-fiction style inquiries, including, "Humans are more important than hardware… What is one of the five SOF truths?"

"Introduction to Special Operations Forces" also included a special ops "$25,000 Pyramid" knock-off that looked, according to the report's authors, "like it cost 25 cents to program."

The US Special Operations Command introduction course used brain teasers along the lines of: "What is the primary mission of the AC-130H Spectre and AC-130U Spooky airplanes?" 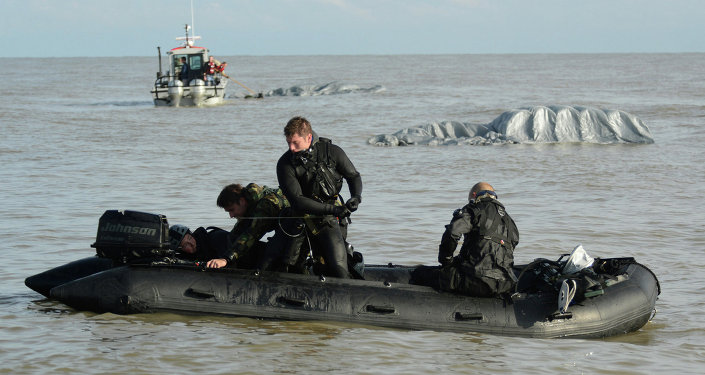 Not very comprehensive for those being trained to be the most feared fighting force in the world, but nonetheless guaranteed to keep new recruits alert.

Running the gamut between mind-numbing and stultifyingly dull, the course's "Secret Mission" quiz game asks — possibly rhetorically — "What are actions taken directly against terrorist networks and indirectly to influence and render global and regional environments inhospitable to terrorist networks?"

The answer, as the song goes, lies within, and the budding warrior must struggle with her inner nature to attain it.