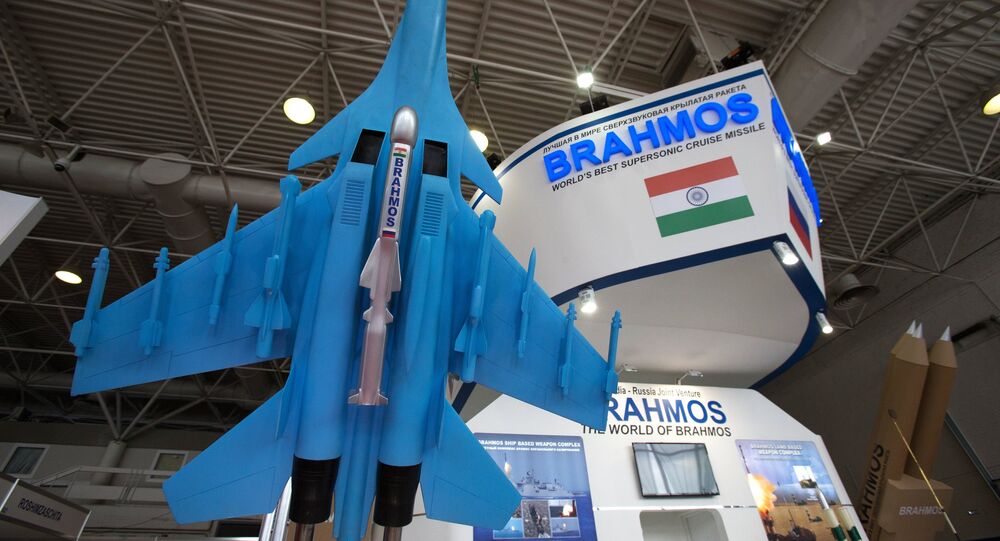 A scale model of the supersonic Russian-Indian BrahMos cruise missile is currently on display at the International Maritime Defense Show in St. Petersburg. While visiting this defense exhibition earlier in the week, Deputy Prime Minister Dmitry Rogozin specifically pointed to the Russian government's constant attention to this joint project.

© AP Photo / Gurinder Osan, File
Russia Starts Work on Boosting BrahMos Missile's Range for India
BrahMos, a confluence of the names of the rivers Brahmaputra and Moskva, respectively, is a short-range supersonic missile, which has been used by the Indian Navy since 2005.

Touted by its developers as a missile which has no analogues in the world, BrahMos is currently capable of hitting targets beyond the radar horizon and can be launched from sea-based and land-based weapon systems.

The nine-meter-long BrahMos can travel at a speed of Mach 2.8 (about 952 meters per second), making it one of the fastest missiles in the world. It has a flight range of up to 290 km and carries a 200-300 kg conventional warhead.

According to India's Economic Times, BrahMos has a "fire and forget" principle of operation, which means that the missile does not require further guidance after its launch and "still hits the target without the launcher being in line-of-sight of the target."

The newspaper described the Brahmos missile as "the most lethal and potent weapon system for precision strikes available in the Indian Army."

In this vein, experts specifically touted the missile's operating simplicity, its effective overcoming of antimissile defenses (at altitudes up to 10 meters) and a huge damage capacity due to imparting vast kinetic energy on a target.

In an article published by the US magazine National Interest, expert Kyle Mizokami in turn included BrahMos in the list of "the 5 most deadly anti-ship missiles of all time, calling it "the fastest low-altitude missile in the world."

"Assuming the defender's radar is mounted at a height of 20 meters, Brahmos will be detected at a range of 27 kilometers. This leaves the defender with just 28 seconds to track, illuminate and shoot down Brahmos before it impacts the ship," Mizokami said.

In an interview with Sputnik, Alexander Maksichev, managing co-director of BrahMos Aerospace, said that "in St. Petersburg, we are demonstrating the full range of combat capabilities of BrahMos, which is capable of equally effectively destroying both sea and coastal targets."

He added that "in July-August, we are completing the integration of the missile with the Su-30MKI fighter jet, something that will significantly expand BrahMos' combat capabilities."

Maksichev also said that many Asian countries have already signaled an interest in buying the missile, with BrahMos Aerospace currently focusing on meeting India's internal needs.

Indian scientists tested the land version of the BrahMos missile in April when it hit a target at a distance of approximately 450 kilometers (around 280 miles) in the Bay of Bengal. Apart from design modifications, the missile's weight has also been reduced by the manufacturer to integrate it with the Su-30 MKI.

Lovely video of the BrahMos missile fired from an Indian Navy warship https://t.co/J8kz1hfCU8

It is anticipated that approximately 20 trials will be made before BrahMos missiles are ready for introduction into the Indian Air Force (IAF). The IAF is expected to equip 42 Su-30 MKIs with the 2016 Brahmos missile.

Earlier, Rossiyskaya Gazeta quoted experts as saying that if the air-launched version of the BrahMos missile is successful, Russia and India may get a strike system which will be second to none in terms of effectiveness among conventional airborne weapons.

BrahMos Aerospace has been engaged with seven countries in Asia and the Pacific, Latin America and the Middle East for selling Sukhoi Su-30MKI fighter jets armed with BrahMos cruise missiles.

"We have requests from seven countries in Asia and the Pacific, Latin America and the Middle East, which already have the Su-30s. They keep a close eye on the ongoing trials and once we are through, we are going to have many new buyers," BrahMos Aerospace spokesperson Praveen Pathak told Sputnik earlier this year.

© AP Photo / Ajit Kumar
India Test-Fires Land Attack BrahMos Cruise Missile From Stealth Frigate
The Indian Navy is equipping all its ships with the BrahMos missile. A hypersonic version of the BrahMos cruise missile, capable of flying at up to 5,000 kilometers per hour (around 3,100 miles per hour) is expected to be created by 2020.

The company was established in India in 1998 through an inter-governmental agreement between India and Russia. India holds 50.5 percent stake in the company and the rest lies with Russia.

"It is important that the production of BrahMos does not depend on parts supplies from the EU. The production is based on a unified quality system which stipulates that the customer accompanies the project from the beginning of development to the end of the tests. The government policy 'Made in India' adds to success of the project," according to RIA Novosti political analyst Alexander Khrolenko.