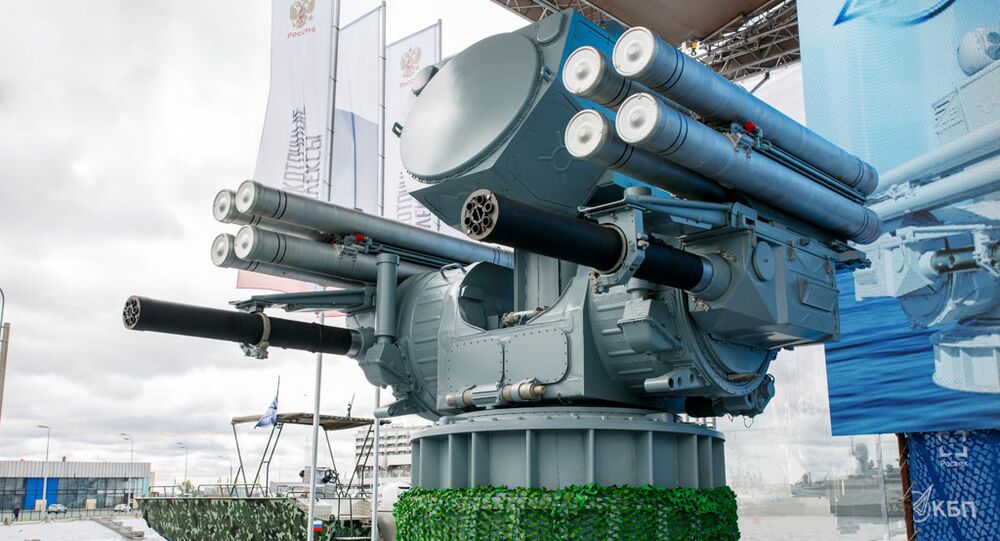 On June 23, Rostec Corporation CEO Sergey Chemezov said the serial production of Pantsir-ME had started. This naval version of the Pantsir system was first presented during the ongoing 8th International Maritime Defense Show (IMDS-2017). According to Alexander Denisov, the general director of High Precision Systems (Vysokotochnye Kompleksy) holding company, which includes KBP, the company has already signed the first contracts to supply this system to the Russian Ministry of Defense.

"At the exhibition [IMDS-2017], we presented the export version of the naval Pantsir, there is also a version for our Navy, its tactical and technical characteristics are similar to those of the export version, but there are a number of differences that we can not disclose due to our obligations to the Defense Ministry," Zhukov said.

© Sputnik / Alexandr Vilf
Russia Showcases New Arctic Tor and Pantsir Defense Systems at Victory Day Parade in Moscow (VIDEO)
Pantsir-ME is capable of simultaneously attacking up to four targets flying at a speed of up to 2,240 miles per hour, with the reaction time being three to five seconds. The naval version of Pantsir can hit targets with missiles at a range of up to 12.4 miles and at a height of up to 9.3 miles.

The system has a feature to automatically fire targets with artillery armament if it turns out that the "target is not hit or not sufficiently hit" after the primary missile attack.

The 8th International Maritime Defence Show (IMDS-2017) is being held on June 28-July 2 in St. Petersburg.