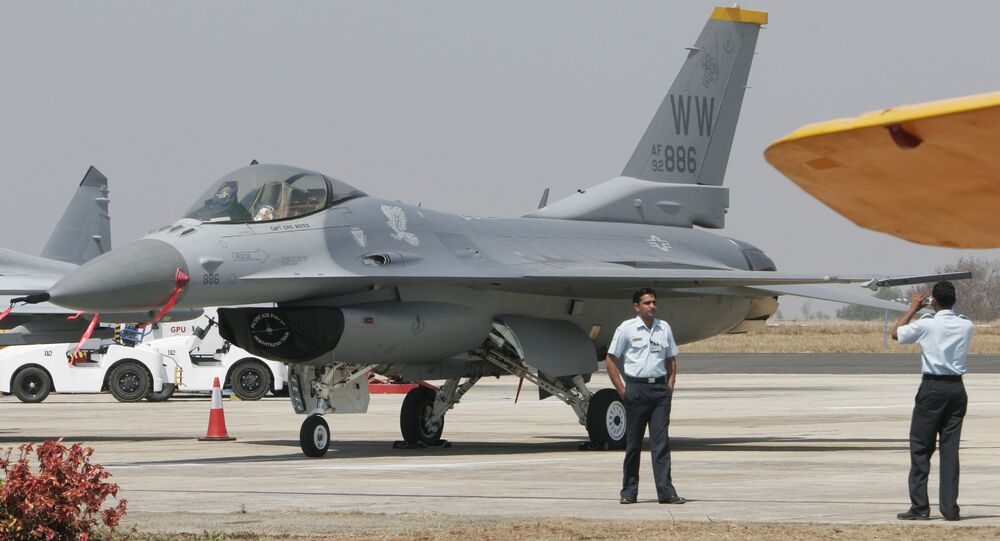 The euphoria surrounding the proposed joint venture agreement between Lockheed Martin of the US and Tata Advanced Systems of India to set up an F-16 jet production line in India is over, at least for now, since the deal wasn’t mentioned in the India-US joint statement.

New Delhi (Sputnik) — The joint statement issued after the first meeting between Indian Prime Minister Narendra Modi and US President Donald Trump hasn't said a word about the deal, which is being touted as a watershed development in India-US defense cooperation, by many.

The Lockheed-Tata deal is contingent upon the Indian Air Force (IAF) selecting and buying the F-16 fighter, but Indian media sources said the government has not made any decision on the US jet, which earlier lost out to French company Dassault's Rafale fighter jets.

"Contingent upon (the) US and Indian government agreement and approval, F-16 Block 70 aircraft would be produced exclusively in India," said a Lockheed Martin statement to the BBC.

© AP Photo / Aijaz Rahi
Questions Arise as US-India F-16 Deal Seeks to Get Airborne
India currently requires over around 200 single-engine fighter jets to replace its aging fleet of MiG-21s and MiG-27s, which are on the verge of retirement. Meanwhile, India's own light combat aircraft (LCA), Tejas, is nowhere near being battle-ready, forcing India to look out for alternatives.

India is already using Russia's upgraded MiG29SMTs and naval version of MiG29Ks, while it is a partner in the Russian Sukhoi T-50 Pak FA stealth fighter program.

The IAF's global procurement of single-engine fighters stems from its failure to acquire 126 medium multi-role combat aircraft from Dassault, which eventually came down to 36 fighter jets in ready-to-use mode. France refused to create a production line in India for these jets.

Subsequently, a section in the Indian media has maintained that Swedish firm Saab's Gripen and F-16 are in the final race for the IAF's $12 billion defense manufacturing deal, even as there has been no official word on it.

© Sputnik / Alexander Kovalev
Tata, Lockheed Martin to Produce F-16 Block 70 Fighter Jet Together in India
On the contrary, defense analysts in India are aghast at the idea that India is considering a fourth-generation fighter dating back to the 1970s to replace its Soviet-era fleet.

"India a dumping ground for obsolete weapons system?" Brahma Chellaney, defense expert and professor at the New Delhi-based Centre for Policy Research, asked on Twitter. "Lockheed Martin signs F-16 deal with Tata. Why Tata? Because they make the noisiest car?"

India a dumping ground for obsolete weapon systems? Lockheed Martin signs F-16 deal with Tata. Why Tata? Because they make the noisiest car?

​Another expert too questioned the logic behind the deal.

"The F-16 will add little in terms of serious technology transfer, market penetration, or denial of strategic space to Pakistan," Abhijit Iyer-Mitra, senior fellow at the Institute of Peace and Conflict Studies, wrote in an op-ed article in Livemint.

"Barring Russia, it is still not easy for us to get high technology from Western countries as seen during Rafale deal. It is true that the F-16 deal may not be the best deal we may get from the US. But we cannot ignore the fact that defense procurement deals are also about more than just getting military hardware. They, more importantly, build strategic partnerships," Harsh V. Pant, Distinguished Fellow at Observer Research Foundation, New Delhi and Professor of International Relations at King's College, London, told Sputnik.

"The F-16 deal (if it materializes) with the Trump administration will be more about what India can do for the US and bringing value addition to the American economy. It is aimed at bringing India closer to the US strategic fold and not in a one-sided manner," Pant said.