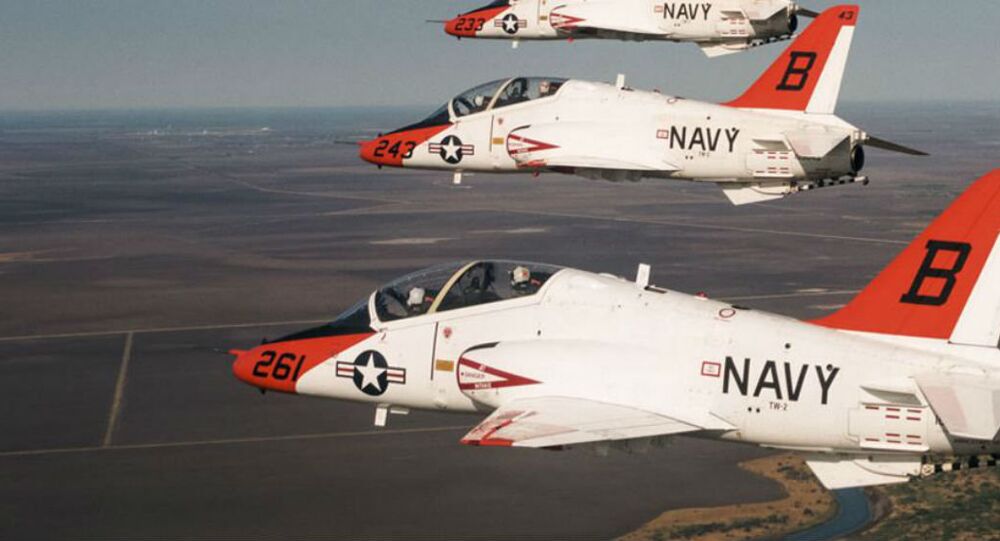 The US Navy is trying to solve the suffocation problem on some of its planes that’s tortured US pilots for years with new and improved oxygen generators, originally developed a decade ago.

© AFP 2020 / MICHAEL W. PENDERGRASS / US NAVY
Four US F/A-18 Pilot Deaths Tied to Oxygen System Issues
If you want to drive a US military officer that works in aviation crazy, say one word: hypoxia. This term, which refers to a lack of oxygen in human tissue, is problem that has vexed US aviation for years, though usually without the public knowing.

The problem finally came to light after the US Navy released a report in which it acknowledged a twofold increase in oxygen system failures between 2012 to 2016. The report focused on the T-45 plane, used to train pilots, but the problem is actually much larger, as reports of hypoxia in pilots of F/A-18 Hornets and EA-18G Growlers have also been made public. At least four US Hornet pilots have died because of hypoxia.

In April, trainer pilots went on strike, refusing to fly T-45s until the oxygen problem is fixed.

Hypoxia issues date all the way back to 2011, when the US Air Force grounded its fleet of F-22 stealth fighters, supposedly "the most capable aircraft in the world," due to a hypoxia rate that was nine times more pronounced than in other US fighters, according to War Is Boring.

Even the mighty F-35, the astronomic cost of which is almost obscene to talk about, suffers from the same issue. On June 12, all F-35s at Arizona's Luke Air Force Base were grounded after five pilots complained of hypoxia. The planes were carefully examined and studied by engineers and technicians, but the cause of the problem has never been found. Luke AFB nonetheless resumed F-35 flights on June 20.

So now the US Navy, which still has no understanding of what causes various US planes' oxygen systems to fail, has decided to try to replace some parts of their onboard oxygen generators (OBOGS) with "next-generation" counterparts developed by UK-based company Cobham… a decade ago.

"We had worked collaboratively with the Navy to modify the GGU-7, which has been the workhorse concentrator on the T-45," Derek Woods, director of pneumatic systems at Cobham, told Military.com, referring to a OBOGS component developed about 30 years ago, according to Defense Tech.

"[S]o they produced an engineered version called the GGU-25 that was really driven to look at some improvements of reliability of components, as well as provide a little bit of expanded communication capability and data gathering ability," he added.

According to Defense Tech, US test pilots took some 400 hours of flight with GGU-25, but, for some reason, it has never gone into production.

According to Woods, though the Navy effectively rejected the GGU-25, the company invested "heavily" into development of the device, updating its characteristics, modifying its design and adding cool new features for communications and data synchronization.

"So we're building in that capability… [it's] not only improved reliability, maintainability, but also flexibility as new technologies and suites of technologies are identified. We really think that's a huge advantage for the flight crew," he said.

Cobham is ready to give the Navy the updated device to replace its 30-year-old predecessor right away, Woods said, but implied that until US Navy identifies the cause of the hypoxia problem, the development process is going to be effectively blind.

"We don't necessarily want the Air Force or the Navy to go down a path that doesn't really add value," he said. "You might be fixing technologies that really don't need to be fixed because you haven't identified that root cause."