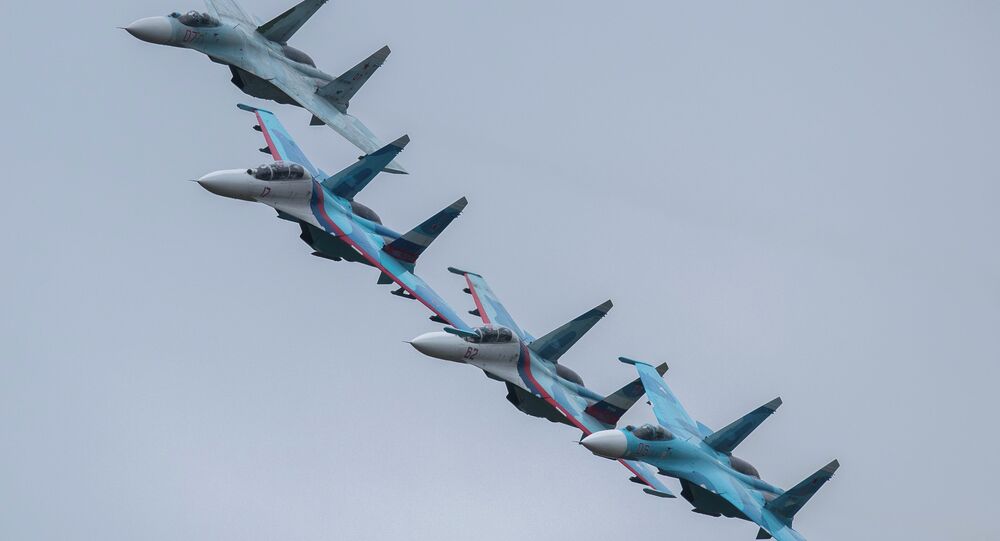 On Monday, Russia scrambled its Su-27 fighter to intercept a target over neutral Baltic Sea waters, which turned out to be a US Boeing RC-135 reconnaissance aircraft. The incident sparked a blame game between the two countries. Military expert Igor Korotchenko commented on the encounter, noting that Russian spy jets don't fly along US borders.

© Photo : Sukhoi Company
Russian Su-27 Vs. US RC-135 in Baltic Incident: The Truth is Out There
"On June 19, Russia's airspace control facilities over the neutral waters of the Baltic Sea detected an air target flying toward the state border of the Russian Federation. To intercept the target, a Su-27 fighter was scrambled… which, after approaching it, identified it as an RC-135 US reconnaissance aircraft," the Russian Defense Ministry said in a statement on Tuesday.

The Ministry said that the RC-135 crew had carried out a provocative turn toward Russia's Su-27, adding that the Russian pilot reacted to the maneuver and kept escorting the reconnaissance plane until it changed  its direction of flight away from the Russian border.

Over the past week, US and NATO reconnaissance aircraft have carried out more than 15 flights over the Baltics with reconnaissance purposes in the immediate vicinity of the Russian border," it added

US Department of Defense spokesperson Capt. Jeff Davis later claimed that the US "was operating in international airspace and did nothing to provoke this behavior." He called it a "poorly controlled intercept" and said that the aircraft commander of the RC-135 "determined it to be unsafe."

"It was a very dangerous encounter, caused by the provocative turn of the US spy aircraft. That provocation could have ended up with a tragedy in the skies," he told Sputnik.

The military expert further explained that last year, at a meeting of the Russia-NATO Council, Russia suggested signing an official agreement on transponders being used on military flights over the Baltics.  Flight transponders are devices which are used in aviation to identify planes from the ground, verify their course, altitude and route.

The Alliance however offered no response to the Russian suggestions, Korotchenko said. That is why when the US reconnaissance aircraft appear near Russian borders; it provokes counter-moves from the Russian Aerospace Forces.

© Sputnik / Igor Zarembo
Pentagon Reveals Mid-Flight Photos of Russian Su-27 Intercepting US Military Aircraft
Russia scrambles its jets, which identify the type of an aircraft, its tail numbers and escort it at a safe distance, the expert explained.
With regards to this particular case, Korotchenko called it a definite provocation on the part of the American pilots.

"In this particular case, Russia had no reason to provoke US pilots in the sky. I stress once again, our pilots are aces. While as for the Americans, they frequently lose their nerves. However this time it might have been a dangerous provocation: the American pilot might have decided to demonstrate that he is not afraid to get close. However the RC-135  is rather a large aircraft and it was not a well-calculated maneuver," the expert said.

He further noted that such incidents don't contribute to improving relations between the two countries, nor between Russia and NATO.

"Our reconnaissance aircraft don't fly along the American coastline and don't conduct any aerial electronic surveillance. The mere fact that the US aircraft are flying along Russia's borders only underlines the aggressive character of the behavior of the US Air Forces. And therefore brings into question the further improvement of relationship between Russia and NATO, which are currently already below zero," Korotchenko finally stated.