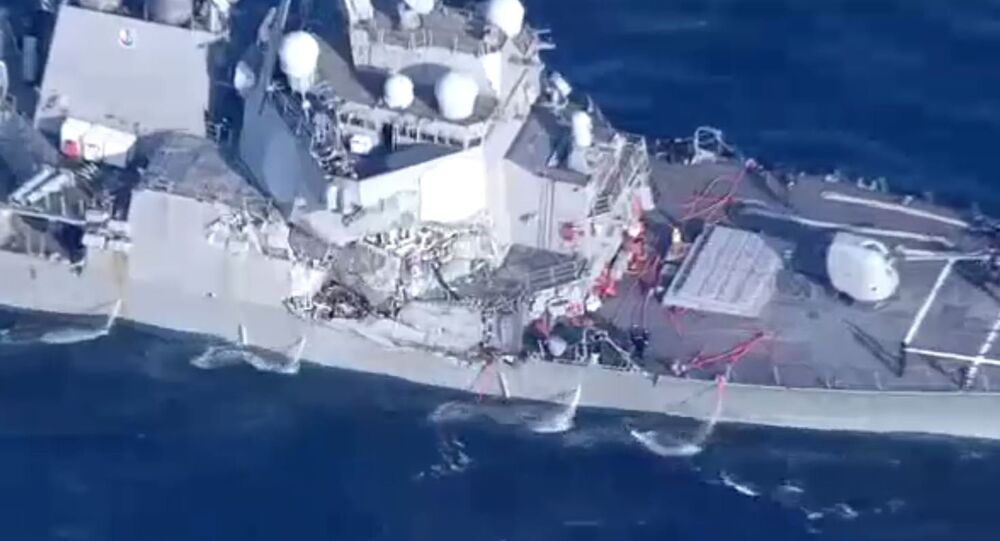 The USS Fitzgerald destroyer hit a Philippine merchant vessel southwest of the Japanese city of Yokosuka on Saturday. All seven previously missing sailors from the destroyer were found dead on Monday. Sputnik spoke with military expert Constantine Sivkov and Vladimir Evseev in an interview about why the destroyer suffered major damage.

“Such accidents are always the result of a violation of the International Regulations for Preventing Collisions [at Sea] by one of the parties,” Sivkov said.

In this accident there was a human factor: a watch officer of the US destroyer showed negligence on his post.

It was noted that the US destroyer received unusually heavy damage from the collision; the repairs will take a long time at the factory.

“Judging by the photographs, the blow came on the area of the central command post of the ship, or the ship's bridge. It was almost completely swept away,” the expert said.

“This means that the system which on the whole ensures the vital activity of this ship and its central management was destroyed. The destroyer has lost its combat capability,” Sivkov noted.

Seven of the crewmembers were killed and the destroyer’s captain, Bruce Benson, was evacuated by a helicopter due to severe injuries.

NHK TV
All 7 Missing Sailors From USS Fitzgerald Destroyer Found Dead
According to the information provided by the command of the 7th US Navy, the elimination of the threat of ship flooding required the heroic efforts of the crew.

Meanwhile, doubts about the suitability of destroyers of the USS type "Arleigh Burke" (Fitzgerald was the 12th ship in this series, it joined the fleet in October 1995) were raised earlier too.

The inadequacy of the ship’s protection was demonstrated back in October 12, 2000, when in the port of Aden, during refueling, the US destroyer of the same type, namely “Cole,” was attacked by suicide bombers on a boat with an explosive charge.

The Japanese kamikaze like attack was devastating to the ship. The explosive pierced a huge hole from the port side, killing 17 and injuring 39.

The cockpits and engine room were flooded and a violent fire erupted.

The destroyer was towed to the United States for repairs and rejoined the fleet in April 2002.

According to expert Vladimir Yevseyev, such incidents reveal various kinds of problems for the US when its military arsenal collides with a strong opponent.

“For example, the Tomahawk cruise missile was fired faultily at a Syrian airfield. This confirmed that the US cruise missiles are virtually not protected from electronic warfare systems. The US must take urgent measures to solve this grave issue,” Yevseyev said.

He further said that the same could apply to the US destroyers, which under some ideal conditions may meet the tasks that they are supposed to face. However, in a collision with a serious adversary, including terrorists, these destroyers may develop various problems.

“Eliminating these issues will require considerable funding, as this may concern the entire series of destroyers of this type,” the expert said.

© AP Photo / Robert F. Bukaty
$4.4 Billion USS Zumwalt Destroyer Towed From Panama Canal After Breakdown
The questions that arise with such incidents are whether such ships are actually suitable for a real war situation, and can an American destroyer really be sunk?

Yevseyev said that although sinking a US destroyer is hardly possible, there are, however, some coasts such as the coast near the Korean peninsula that may pose a grave threat to ships because it has sharp underwater rocks.

Hence, in a hypothetical situation if the North Korean fleet and a US destroyer came face to face, the North Korean boats, which have a relatively low tonnage, may have some advantage in such waters.

A US Navy destroyer hit a Philippine merchant vessel southwest of the Japanese city of Yokosuka on Saturday. Following the collision a number of sailors went missing.

The next day the missing sailors were found dead in the flooded berthing compartments.

The incident is currently under investigation.