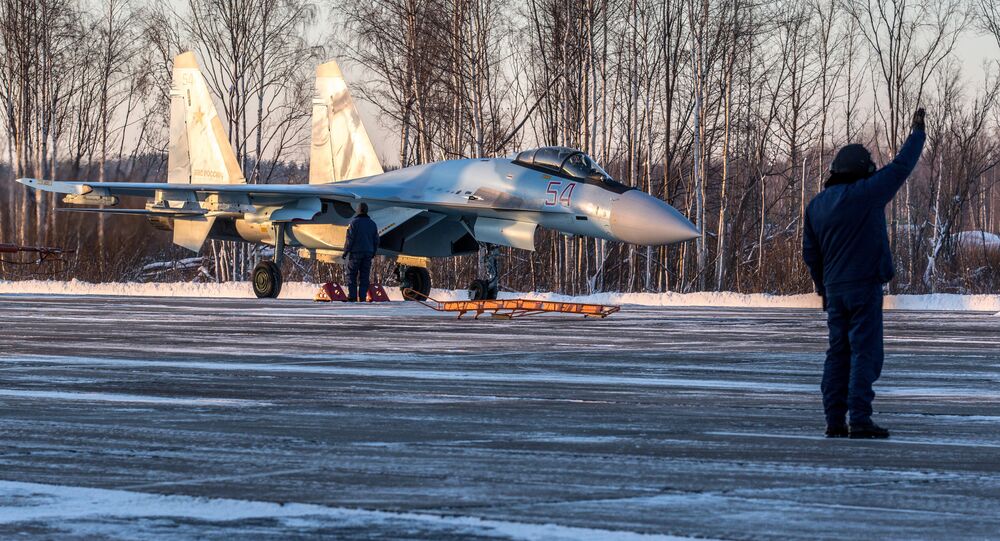 Earlier this month, Russian Deputy Defense Minister Yuri Borisov confirmed that the military would be modernizing its fleet of Su-35 fighter jets.

© Sputnik / Vladimir Astapkovich
PAK FA and Su-35S: The Future of the Russian Air Force
The decision to improve the planes was made on the basis of a thorough analysis of their experience in the Syrian conflict, where several problems were brought to light. Among them was an issue with stones from the runway being sucked into the planes' air intake, as well as technical glitches affecting their lights and cockpit displays.

But these shortcomings have already been fixed. With that in mind, independent military analyst and Svobodnaya Pressa contributor Vladimir Tuchkov suggested that it was only logical to ask what kinds of other upgrades the deputy defense minister had in mind.

"Was the deputy defense minister referring…to improvements limited to optimized air intakes, lights and displays? Or is there something else that needs improvement?" Tuchkov asked. "If it's the latter, the list of issues identified during operations naturally remains a military secret, because the opponent, knowing the planes vulnerable areas, will strike at exactly these points. So this subject is closed to us."

Still, the analyst noted that it was possible to speculate, based on a consideration not only of the Su-35's strong points, but its shortcomings as well.

"The strongest quality of the Su-35S is undoubtedly its supermaneuverability," Tuchkov wrote. "The plane is capable of performing aerobatic maneuvers which no other plane can. It is capable of the unique 'blinchik' ('pancake') maneuver, performing a 360 turn in the horizontal plane without a loss of speed and altitude. When the Su-35 demonstrated its flight capabilities at the Paris Air Show, it was dubbed the 'Russian UFO'."

Tuchkov explained that the plane's supermaneuverability has two components – its thrust-vectoring engines and its highly aerodynamic airframe, inherited from the Su-27 and improved by designers over the course of many years. "Such continuity is something that's not observed by American designers, and as a result the US does not enjoy the continuous improvement of the flight characteristics of its fighter designs on an accruing basis," the analyst noted.

Tuchkov admitted that naturally, if the Su-35S were to come into contact with a low-visibility, 5th-generation aircraft, it would face problems. "The geometry of the Su-35S is such that it cannot be changed to somehow reduce its visibility to enemy radar. There isn't any news in the field of new synthetic materials for this purpose. Russia's Scientific Research Institute of Steel has concentrated their efforts in the field of obtaining particularly strong composite armor, which has demonstrated excellent performance. But nothing else has been heard about new materials lately."

© Photo : vk.com
Russian Radio-Technical Troops Detected Over 800 Foreign Reconnaissance Aircraft in 2016
"In addition to its geometry, another factor dramatically increasing the plane's excess visibility is provided by its onboard electronics, and first and foremost by the Irbis radar," the expert wrote.

"The radar system is excellent, and can detect targets with an effective radar cross-section of one square meter at distances of up to 300 km. The AN/APG-77 radar system installed aboard the F-22 Raptor, which is undoubtedly the best fighter in the US arsenal at the moment, can 'see' the same target at a distance of 225 km. However, the American system, which has an active phased antenna array, emits significantly less signature into the surrounding atmosphere."

Reducing the radar signature emitted by the Irbis radar is difficult, Tuchkov explained, given the nature of the passive phased array antenna technology it uses.

The Su-35S's fire control system is also limited compared to its 5th generation F-22 counterpart, the observer wrote. While the F-22 is capable of simultaneously monitoring 100 targets, and firing at twenty of them, the Su-30 can monitor thirty and fire on eight.

"However, there is some probability that this 'problem' can be solved via the bureaucratic method, which has become a possibility in connection with the possible merger between Sukhoi and MiG Corporation," Tuchkov explained. "In this way, it will be possible for Sukhoi to borrow the Zhuk-AE radar used on the MiG-35."

© Sputnik / Vitaliy Ankov
MiG Corporation's Bold Plans: Interceptor to Replace MiG-31 & New Drone Designs
Then there is the issue of bringing the capabilities of the Su-35S's missile systems in line with its radar capabilities. For example, the Su-35S's radar can detect targets with a radar cross-section of 3 square meters at 400 km. At the same time, the plane's air-to-air missiles have a firing range that's nearly four times lower.

However, Russia also has an air-to-air missile in the pipeline which will not only match US capabilities, but considerably outpace anything US engineers have in the works. "This is the completely new R-37M, which has a range of 300 km. Now this missile fully corresponds to the capabilities of the Su-35S's radar. It is being fitted aboard the MiG-31BM interceptor. There is information to suggest that it will be part of the T-50 [5th gen] fighter's arsenal."

Ultimately, Tuchkov emphasized that if the R-37M were to be adapted for use aboard the Su-35S, this would fit entirely with the concept of prospective upgrades referred to by the deputy defense minister.

The 4.06 m long, 510 kg R-37M features a 60 kg high-explosive fragmentation warhead. Its inertial guidance system provides for radio correction, if necessary. The missile includes an active radar seeking device, activated in the final portion of flight, with a target capture angle of 120 degrees. The system has two fuses – one contact based and a second based on calculated distance to the target. The missile is capable of reaching speeds of up to Mach 5 in the final stage of flight.

"The missile is capable of destroying targets at maneuvering with acceleration of 10g," Tuchkov wrote. "In other words, dodging the R-37M is extremely difficult even for the F-22, which maneuvers with acceleration up to 9.5g."

Finally, Russia has another air-to-missile in store – the KS-172. That missile has an estimated range of 400 km, a maximum flight altitude of 30 km, 12g targeting capability, and a speed of 4,000 km/h. "That missile is being designed for the T-50. If it can be fitted aboard the Su-35S, many of this problems this fighter [might have fighting 5th gen planes] will quickly disappear," Tuchkov concluded.