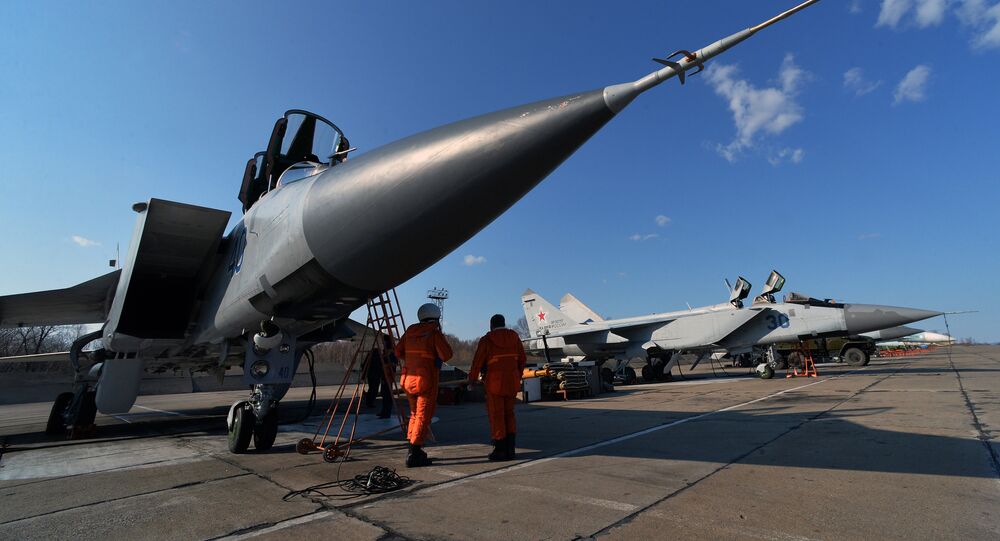 MiG Corporation is busy working to develop a replacement for the MiG-31 fighter-interceptor, company general director Ilya Tarasenko has revealed. The company head also indicated that the company is actively working on creating a multipurpose military drone.

Speaking to Russia's Kommersant newspaper, Tarasenko explained that the company has divided its business into three main clusters.

"The first involves the modernization of aircraft which had been delivered to the customer earlier," he said. "In other words, we can modernize them in such a way as to bring their characteristics as close as possible to fifth generation aircraft."

© Photo : Krasimir Grozev
'Real Quality': Serbia Looks Forward to Impending Delivery of MiG Fighter Jets
"The second area, which we are proposing to our customers, and on which we are proactively working, is a prospective long-range interceptor aircraft," Tarasenko added.

Tarasenko said that work on the new aircraft is already underway, even as the company continues to fulfill its commitments to modernize Russia's fleet of Mig-31 fighter-interceptors. According to the official, the company hopes to have a new plane ready by the time the next prospective modernization of the MiG-31 rolls around. "That's our plan," he said.

The MiG-31 is a long-range supersonic fighter-interceptor, designed for use against both high and low-altitude airborne targets. The plane was first introduced with the Soviet military in 1980, and its mass production continued until 1994. MiG Corporation is currently fulfilling a contract to modernize the Russian Aerospace Defense Forces' existing fleet of MiG-31s. The military expects for the planes to remain in service until at least 2030.

Dmitri Drozdenko, military expert and deputy chief editor of Arsenal of the Fatherland, a Russian military affairs magazine, told Radio Sputnik that even though it was only natural for MiG to work on new designs, the MiG-31 has quite a bit of juice left in it.

"The [existing] MiGs are undergoing modernization, so these machines will continue to serve for a while yet," the expert explained. "The MiG-31 has a very large reserve [of potential] left in it; it's an excellent aircraft, and very formidable. The plane retained all the best qualities from [its predecessor,] the MiG-25; initially, its task was to allow several formations to close off the country's entire northern flank to enemy missiles and aircraft traveling at high altitudes and high speeds. In addition, these aircraft are capable of working in groups, exchanging information while in flight."

© Sputnik / Evgeny Biyatov
Russian Defense Ministry Signs Pantsir-S Delivery Contract
Drozdenko noted that by the time the MiG-31 requires its next modernization, a new aircraft built on new principles must be ready to take its place. "This new plane will likely be able to fly to near space, and may perhaps have hypersonic capabilities."

In any case, the analyst emphasized that Russian aircraft designers are not standing in place, and are building on their earlier work.

"[MiG-31s] are not attack aircraft; they are aircraft for defense. Their task is to defend our airspace from enemy aircraft and cruise missiles. Naturally, this is very important for a country like ours, because we have very large borders and a vast airspace, and just covering them with air defense systems like the S-300 or S-400 on our borders is just impossible. Therefore, our aviation does not stand in place; we have preserved the groundwork of past years, and are moving into the future," Drozdenko concluded.

"Unmanned drones are the future," he said. "The operation being conducted by our armed forces in Syria has demonstrated that we cannot underestimate the role of unmanned aircraft in conflicts. [We have projects] created starting in the early 2000s which have been very useful. Much of this groundwork has been used by our design bureau. We're talking about light UAVs, capable of performing reconnaissance missions, conducting electronic warfare, and striking at enemy targets."

"We are formulating our proposals in these three areas," Tarasenko said. "And I can reveal a secret: there will be a drone combining all three functions," he added.

MiG's general director confirmed that development work on drones has already reached the prototype stage. "We bring our designs to our customers; after a decision is made, financing will continue."