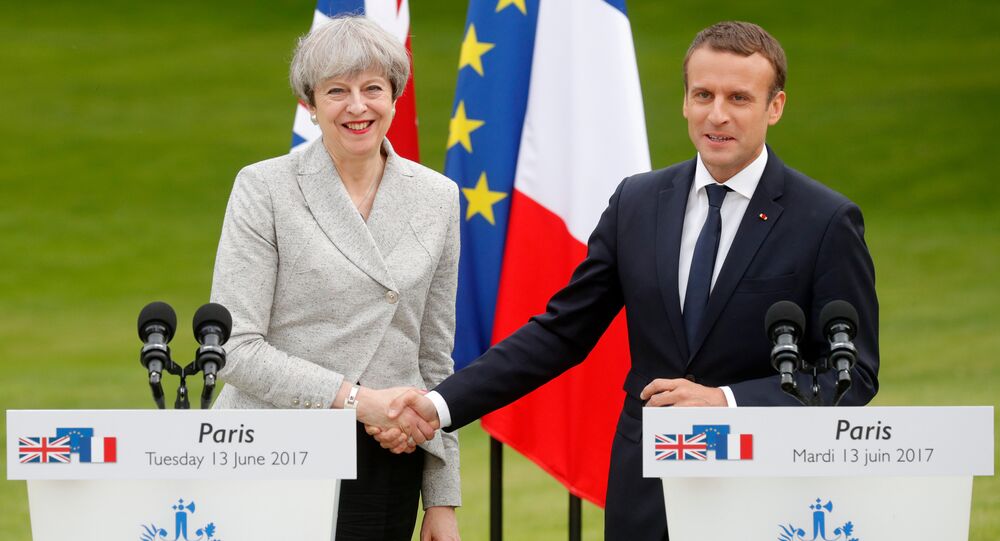 The UK and France are pushing ahead with a joint plan to fight terrorism, online hate speech, and crack encrypted data – with French intelligence services even less hindered by restrictions on their surveillance powers, Theresa May's government may finally succeed in its long-term objective of ending encryption outright.

Speaking at a joint press conference in Paris 13 June, Emmanuel Macron and May said the two countries were renewing cooperation on counterterrorism, and outlined several troubling proposals, including imposing fines on social media firm for not removing flagged online hate speech quickly, and inserting backdoors into encrypted messaging services.

"We are launching a joint UK-French campaign to ensure the internet cannot be used as a safe space for terrorists and criminals. Our campaign will also include exploring creating a legal liability for tech companies if they fail to take the necessary action to remove unacceptable content," May said.

In a series of tweets, Macron hailed the "exemplary cooperation" between the two countries, and paid tribute to "our intelligence services working together daily."

​France has already made it a criminal offense for individuals to visit so-called terrorist sites — similar laws are said to be under consideration in the UK. However, the measures have been criticized by rights groups for criminalizing legitimate research, and blocking benign resources. In 2016, Reporters Without Borders slammed Facebook for complying with government requests to block accounts of journalists investigating terrorism — often, reporters found themselves banned from the social network simply for sharing articles replete with illustrative pictures of Daesh fighters.

May: "Counterterrorism cooperation between our intelligence agencies is already strong, but Macron and I agree that more should be done…"

© AP Photo / Rene Rossignaud
UK, German Governments Push for Greater Regulation of the Internet
​Later that year, a Moroccan youth in France was given a six month jail sentence for consulting the website of a US academic who works for a Washington-based think tank specializing in terrorism.

The duo's pledge to compel tech firms to insert backdoors into get easier access to encrypted content, no matter where the data is localized, echoed numerous sentiments previously voiced by leaders in both countries.

For instance, in the wake of the March terror attack in Westminster, Home Secretary Amber Rudd said it was "completely unacceptable" that authorities were unable to view attacker's Khalid Masood's encrypted WhatsApp messages, and argued there should be "no place for terrorists to hide." A similar stance was taken following the May attack in Manchester.

​In August 2016, French Interior Minister Bernard Cazeneuve and German counterpart Thomas de Maiziere unveiled a plan to limit the use of encrypted messaging to combat terrorism. However, while the French version of the pair's joint statement called for a total ban on unbreakable encryption, the German version did not. Nonetheless, German Chancellor Angela Merkel has been a consistently outspoken critic of internet companies that refuse to remove or delete illegal content quickly, and lamented the lack of binding international rules on the issue.

The Bundestag is considering legislation that would introduce significant fines for companies such as Twitter, Facebook and Google if they fail to act quickly — although critics have suggested any such plan would be unenforceable. EU Justice Commissioner Vera Jourova also in April said she would be proposing a new "e-evidence" bill by the start of 2018, which would grant authorities warrants to break encryption in specific cases.

​At present, France has no law making it mandatory for tech firms to insert encryption backdoors into their services — however, legislation does allow for government hacking of pre-encrypted data. For instance, the 2015 Intelligence Act gives French intelligence officers total immunity to hack computers at home and abroad. UK authorities can theoretically compel the removal of encryption via the 2016 Investigatory Powers Act — although tech firms have so far refused to comply — and hack anyone's computer.

Concerns have been widely expressed about the evident Europe-wide push for greater surveillance powers, with Amnesty International in January calling for the European Union and its constituent member states to abandon espionage practices it feels "violate human rights."

"Mass surveillance powers have been granted or otherwise expanded in the UK, France, Germany, Poland, Hungary, Austria, Belgium, and the Netherlands, among others, allowing the mass interception of and possible access to the data of millions of people," the group concluded.

Majority of DDoS Attacks in October-December 2016 Conducted From Germany, UK, US