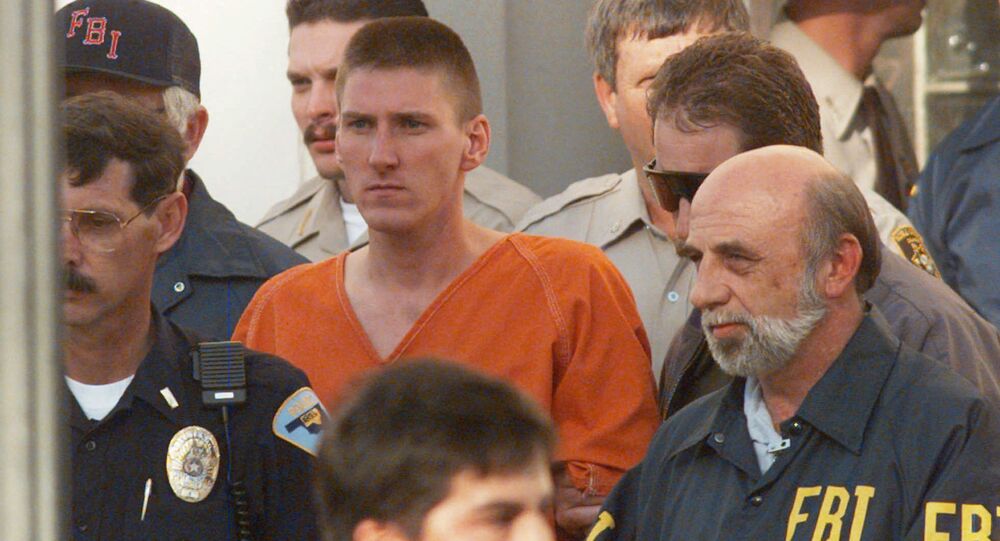 On June 2 1997, Timothy McVeigh was convicted for his role in the 1995 Oklahoma City bombing, an attack in which 168 people died. While commonly regarded as a "lone wolf" terror attack, there are significant questions over how "lone" he was. Moreover, there are many parallels between the bombing and May's Manchester attack.

Conspiracy theories surrounding the OKC attack have abounded ever since it occurred, suggesting varying levels of government involvement and/or foreknowledge. Many suspicions relate to the prospective role of "John Doe #2" — an elusive and potentially mythical co-conspirator.

While several witnesses reported seeing another man with McVeigh at almost every stage of his route to the bombing target, the Alfred P. Murrah Federal Building, and a severed left leg — unmatched with any victim — was found in the building rubble, a nationwide manhunt produced no arrests, and US authorities' official position is no such person exists.

OKC Bombing 1995 John Doe #2 and Andreas Strassmeier: One and the same? pic.twitter.com/yzcgZdnt

​Nonetheless, whether or not McVeigh was the sole driver of the explosive-laden Ryder Truck that obliterated the building and slaughtered so many in the process, it is incontestably erroneous to apply the "lone wolf" label to his case.

For one, McVeigh was not the only individual who stood trial for a role in the attack — authorities concluded he primarily acted in tandem with Terry Nichols, like McVeigh a US army veteran.

Nichols was found guilty in 1998 of conspiring to build a weapon of mass destruction and eight counts of involuntary manslaughter of federal officers, and in 2004 was found guilty of 161 counts of first-degree murder. He is currently serving 161 consecutive life terms without the possibility of parole.

27 May 1998 Michael Fortier was sentenced to 12 years prison & fined $200000 for failing to warn authorities about the Oklahoma City bombing pic.twitter.com/JVMvPWg2LD

​Moreover, two other individuals — Michael Fortier and his wife Lori — were considered accomplices to McVeigh, due to possessing foreknowledge of the planning of the bombing.

Michael testified against McVeigh and Nichols in return for a reduced sentence and immunity for his wife. He was sentenced May 27, 1998 to twelve years in prison and fined US$75,000 for failing to warn authorities about the impending strike.

The OKC bombing raises many questions about the viability of the "lone wolf" terrorist concept, and the Fortiers are a palpable demonstration of one of the theory's key issues — namely, very few if any violent extremists have been found to have subsisted in a total vacuum prior to their attacks.

In the late 1990s, the FBI revealed that in most school shootings the culprits had revealed their intentions to associates before acting. This phenomenon — dubbed "leakage" — is present in many terror attacks, whether carried out by ostensible "lone wolves" or larger groups.

FBI began to talk about "leakage" of critical information and in 2009, it was announced that "leakage" was evident in over four-fifths of 80 ongoing terrorism cases being investigated by authorities. Of these leaks, 95 percent were to friends, close relatives or authority figures.

​Such a claim is backed up by a 2013 Pennsylvania State University study. Researchers examined the interactions of 119 lone-wolf terrorists, finding even if terrorists launched their attacks alone, in 79 percent of cases others were aware of the individual's extremist ideology, and in 64 percent of cases family and friends were aware of the individual's intent to engage in a specific terrorism-related activity.

In Islamic militant cases, 45 percent of perpetrators talked about their inspiration and possible actions with family and friends.

Even if prospective "lone wolves" manage to hide their intentions from their families and friends, or indeed have no close associates to whom they can blab, the internet provides many with a resource for spelling out their diabolical plans to others.

In 2016, a University of Miami study of 196 pro-Daesh groups operating on social media, with a combined membership of over 100,000, found many individuals inspired by the self-styled "Islamic State" — also known as Daesh — spoke of their desire to carry out "lone wolf" attacks. Moreover, those that were not part of a wider network had been at some point previously.

A University of Miami research study has found that out of 40,000 ISIS supporters accounts they studied, 16,000 are now run by women.

​McVeigh himself is an example of this latter phenomenon, as he was actively involved in various militia movement groups prior to the bombing.

Furthermore, he is believed by the FBI to have been inspired by a manifesto published by American white nationalist Louis Beam, dubbed "Leaderless Resistance" — as its title implies, Beam suggested "very small or even one-man cells" were the only effective means of combating the US government. Beam's paper is said to have motivated many other "lone wolf" actors to carry out strikes, albeit on a much more meager scale than the OKC bombing.

​As a result, it is obviously debatable whether the term "lone wolf" is genuinely applicable to a perpetrator when they are specifically acting in accordance with an ideology that openly calls for insurrectionary acts to be carried out by individuals, and many others are likewise independently roused to action by the same dogma.

This question certainly hangs over the two major terrorist attacks carried out in the UK in 2017 — the March Westminster strike, and the May Manchester concert bombing — which have been liberally dubbed "lone wolf" attacks by politicians and the media.

© REUTERS / Andrew Yates
Vehicles are seen near a police cordon outside the Manchester Arena, where U.S. singer Ariana Grande had been performing, in Manchester, northern England, Britain, May 23, 2017.
Just as McVeigh's bombing prompted a vast manhunt that terminated with investigators concluding he acted alone — or largely alone — so too have police stated Manchester attacker Salman Abedi acted alone (or at least "largely alone").

While in the days following the bombing at the Manchester Arena police said they were investigating Abedi's potential membership of a network, on May 31 detectives said the 22-year-old purchased his bomb's components and constructed the deadly device without outside direction or help.

© AP Photo / Owen Humphreys/PA
Manchester Police Chief Says Abedi Known to Police Only for Minor Crimes
Still, police have not yet ruled out that Abedi may have had accomplices of some kind, and have said a number of aspects of his behavior prior to the attack are of concern.

In all, 16 have been arrested in connection with their investigation, which has a reputed 3,000 lines of inquiry. Three men were released without charge May 30 — two men aged 20 and 24 from Fallowfield, south Manchester, believed to be Abedi's cousins, and a 37-year-old from Blackley, north Manchester. A 16-year-old boy from Withington and a 34-year-old woman from Blackley were also released days prior.

As of June 1, 11 individuals — all men — remain in custody. Under UK terrorism legislation, suspects can be held without charge for up to 14 days.

Investigations into Westminster attacker Khalid Masood have concluded he acted entirely alone, although there was certainly "leakage" in his case — he sent a WhatsApp message to an associate minutes before striking, stating he was "waging jihad" in revenge for Western military action in the Middle East.

Moreover, the use of vehicles to carry out atrocities was explicitly endorsed by now-deceased Daesh spokesperson Abu Mohammad al-Adnani in September 2014, who said Americans and Europeans could be killed "in any manner," including by cars.

Neither attack, like McVeigh's, may arguably be judged to be truly a "lone" endeavor.