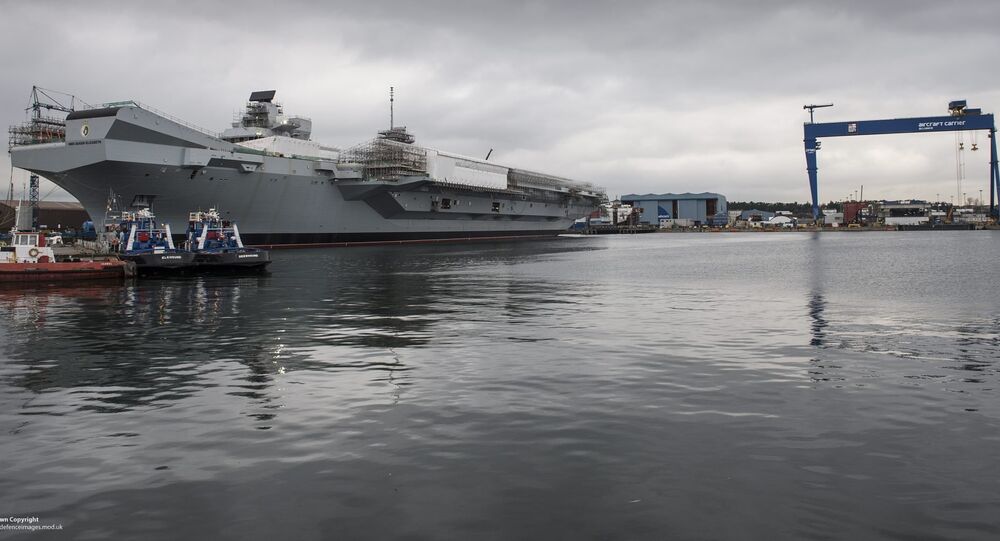 The Royal Navy's new aircraft carrier, HMS Queen Elizabeth, is all ready to leave the shipyard where it was built and head out for sea trials. It has been specially designed so it can "duck" under the Forth Bridge.

The construction of the HMS Queen Elizabeth, and its sister ship the Prince of Wales, has been a monumental undertaking.

In the last 10 years around 10,000 workers all over Britain have been involved in putting together a 65,000 tonne jigsaw puzzle.

Pieces of the ship were fabricated in shipyards as far away as Appledore in Devon and Portsmouth and floated up to Rosyth in Scotland, where they were then welded together.

Now the ship is complete and ready to put to sea but one last obstacle stands in the way — the Forth Bridge.

Rosyth lies upstream of the bridge and in March 2011 the world's largest crane, known as Goliath, had to wait for low tide before it could pass under the bridge on its way to the yard from China.

Now the Aircraft Carrier Alliance, the consortium of companies who are building the ship for the Royal Navy, will have to get it under the bridge.

The Queen Elizabeth is due to undergo sea trials this summer and is almost ready to leave Rosyth.

But waiting for low tide will not be enough because the highest point of the ship, a pole mast, would not fit under the bridge even at low tide.

Fortunately the naval architects specially designed the ship with a pole mast which can be winched to the side, so it can fit under the bridge.

But it will be a matter of only a few yards and observers on the banks of the Firth of Forth might be holding their breath to make sure the ship makes it without getting stuck or breaking off the mast.

The pole mast contains vital communications equipment which needs to be high above the deck of the ship.

Earlier this year the Defense Secretary Michael Fallon said: "It has always been our intention that Queen Elizabeth should be accepted into the Royal Navy before the end of this year. We are not giving specific dates as to when the sea trials are likely to commence.

"The Queen Elizabeth will set out on those sea trials when she is ready to do so."

The Aircraft Carrier Alliance — made up of Babcock, BAE Systems, Cammell Laird and A&P Tyne — will conduct the sea trials before handing the ship over to the Royal Navy.

"We will test the ship and its mission systems and then it will debut in Portsmouth later in the year. Flying trials will take place next year and in 2019 and the ship is due to come into service with the Navy in 2020," Kate Taylor, a spokesperson for BAE Systems, told Sputnik.

Captain Jerry Kyd, who will be the commander of the HMS Queen Elizabeth, said last year he would like to see US warplanes deployed on board the ship for at least nine months after it comes into service.

Ms. Taylor said the HMS Prince of Wales was "structurally complete" but was being fitted out and it would be some time before she was ready for sea trials.

The two aircraft carriers were originally ordered by the Labour government, but in 2010 the Conservative/Liberal Democrat coalition in their Strategic Defense Review decided that as soon as the Prince of Wales was built it would be "mothballed" to save money.