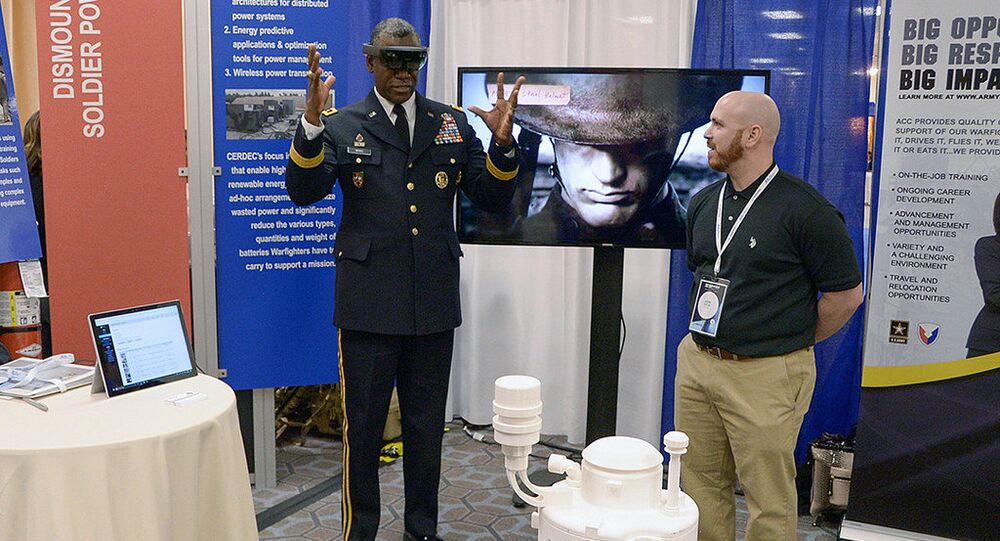 Call of Duty About to Get Real: Tactical Augmented Reality on the Battlefield

At the May 18 second biennial Pentagon Lab Day in Washington DC, the US Army Communications-Electronics Research, Development and Engineering Center and Army Research Lab demonstrated a prototype technology ripped straight from first-person shooter computer games - an "augmented reality" display that helps soldiers tap into sensors and other data.

Dubbed Tactical Augmented Reality (TAR), the technology is the latest developed in the US Army's ongoing effort to create greater networks between soldiers, and imbue them with "situational awareness" on battlefields — constant cognisance of where they, their allies and adversaries are.

​CERDEC, ARL, and the Defense Advanced Research Projects Agency have long-toiled to make augmented reality work effectively on the battlefield, most notably developing the Heads Up Navigation, Tracking and Reporting (HUNTR) system. The limitations of wearable tech have long been a significant barrier to greater development, however — while the army has tried to equip soldiers since the late 1980s, such resources are still years, if not decades, away from reaching theaters of war.

The military's first attempt was "Land Warrior" — it sprang out of a technology program in 1989, Soldier Integrated Protective Ensemble, which showed enhanced sensors and communications could significantly boost small infantry units' combat capabilities.

​The concepts behind Land Warrior didn't take concrete form until 2000, when they became part of the army's Future Combat Systems program — Land Warrior was given to defense firm Raytheon to develop.

The end result was a proposed integrated computer system as part of every soldier's kit, as well as a helmet-mounted display, featuring communications and navigation data.

In theory, the system allowed commanders to track where troops were in real-time — however, the system didn't offer soldiers information on their local environments, and was plagued by severe issues, the most prominent being the hefty weight of the system's batteries, computing power, radios, and TV screen.

Given basic infantryman combat gear already weighed 80 pounds by itself, and Land Warrior added a further 40 pounds to the load, soldiers simply couldn't take the strain. It was akin to carrying a nigh-on 10 stone child around in perpetuity.

Reviews from soldiers who used the gear were scathing:

"It's just a bunch of stuff we don't use, taking the place of useful stuff like guns. It makes you a slower, heavier target… there are lots of glitches… it seems like a lot of excessive stuff… we aren't fans…"

@POTUS @realDonaldTrump Mr. President, would it be possible to renegotiate the old Future Combat Systems program to make it less expensive? pic.twitter.com/vkr5FAYDko

​Only one version of the system was ever actually deployed — the "Stryker Interoperable" variant, designed to work with systems aboard the Stryker Infantry Fighting Vehicle. It was sent to Iraq with the 4th Battalion, 9th Infantry Regiment. The program was eventually canceled in 2007 on the basis of cost — a single set of a gear ran to US$85,000.

Up next was "Nett Warrior" — named after World War II Medal of Honor winner Colonel Robert B. Nett, it aimed to meet the army's technological aspirations faster and cheaper. The helmet-mounted monocle was dispensed with, replaced by a chest-mounted Android device, using off-the-shelf hardware components to achieve the same effect — although soldiers were now required to look down and check smartphones to receive intelligence and data.

This project likewise stuttered to a halt, although it did give the military a common networking interface and a development platform conducive to building wearable computing applications.

As with prior projects, the army's vision for TAR combines enhanced navigation, friendly force tracking, information sharing, and weapons targeting — however, instead of giving soldiers a monocle display "dashboard" to watch, data is instead projected directly on their field of view in a way that meshes seamlessly with the terrain around them.

The HUNTR system uses an Android port of a software package called ARC 4, according to a 2015 CERDEC presentation.

ARC, developed by Applied Research Associates (ARA), was also used in an earlier DARPA augmented reality program, Ultra-Vis. ARC data can be displayed either within enhanced night-vision gear, or on a variety of existing head-mounted see-through displays.

​The software uses GPS data, helmet-camera data, and inertial sensors to "geo-register" a soldier's field of view, allowing symbols designating waypoints, points of interest, and friendly forces to be projected on what a soldier sees, as well as a navigational compass showing the direction to tracked objects when they're not in view.

Additionally, a 3D model of terrain can be superimposed on the real world to aid navigation. The end result will directly recall the resources available to players of first-person shoot 'em ups, such as Call of Duty.

​Still, major problems remain — one being that off-the-shelf display technology isn't up to the demands of battlefield use. While it's relatively easy to project augmented reality data on night-vision displays, daytime use of augmented reality is made difficult by the relatively small field of view and low contrast of such displays. Moreover, most displays don't generate enough relative brightness to be visible over brightly lit desert or winter terrain.

ARL and CERDEC are hard at work with suppliers building one that's up to the job.

1ARA is also looking for commercial applications for its software, from logistics to augmented reality gaming to social media — a palpable demonstration that the US military industrial complex often produces innovations with consumer applications.

The push for augmented reality on battlefields will transport the revolutionary technology into the hands and homes of consumers the world over.

How 1901 Novel Predicted the Appearance of Augmented Reality