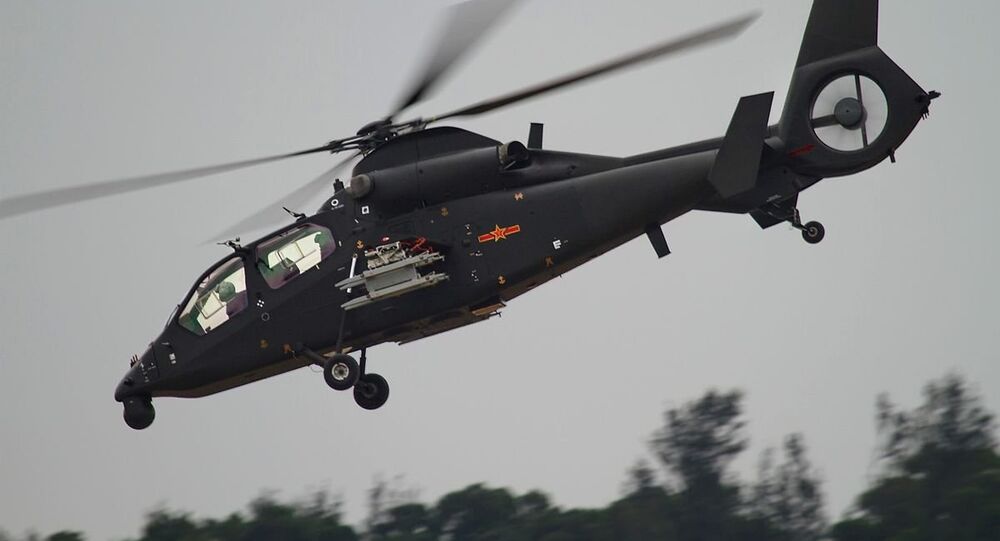 China's new attack and reconnaissance helicopter, the Z-19E, made its maiden flight over the port city of Harbin, northeastern China on Thursday. Observers from Zvezda – the official television network of the Russian Defense Ministry, were impressed with the chopper's sleek styling, but suggested that its combat capabilities are questionable.

The Harbin Z-19E, dubbed the "Black Whirlwind," is the export version of the Z-19 recon/attack helicopter developed by Harbin Aviation Industries Group (HAIG) in the early 2010s and introduced into service in the Chinese military in 2012. Chinese media described the Z-19E's creation as "a major step in China's entry into the global market for attack helicopters."

The company hopes that its narrow-body, tandem-seat 4,250 kg chopper will fill demand for armies looking to improve their ground attack capabilities. The Z-19E is armed with anti-tank and anti-armored personnel carrier missiles, and can also work with special ops' forces to carry out reconnaissance missions.

Being very similar to the Z-19, its domestic cousin, developers say that the foreign-market oriented Z-19E is up to international standards, and that it has an English-language operating interface.

Commenting on his impression of the new helicopter, Zvezda contributor Dmitri Yurov explained that judging by looks alone, the Z-19E certainly looks impressive: "The small helicopter looks more like a stealth drone than a strike vehicle."

"But is there a place for the futuristic machine outside China?" he asked. After all, the analyst noted that "the need for modern combat helicopters is generally determined by only three basic parameters: this is the so-called PAC rule – Protection, Armament, Cost."

© AFP 2021 / Dibyangshu SARKAR
India Looks for Foreign Engine Maker to Power Indigenous Multi-Role Helicopter
Yurov emphasized that when it comes to protection, conditions of modern warfare are such that helicopters need all the protection they can get. "Conflicts, even local ones, abound with a variety of destructive means, even when they are conducted in places where the fighting is done mostly by taped-together automatic rifles."

"Even the smallest active conflict comes with a large number of large-caliber machineguns, and old but still operational anti-aircraft artillery," Yurov added. "Ever since the Soviet War in Afghanistan, it has been clear that armored protection of the hull and cockpit is the first and most important element in the survivability of the helicopter and its crew."

Unfortunately, the analyst noted that "over time, the lessons of the Afghan War and the use of helicopters in combat have been diligently forgotten by manufacturers."

"Piously believing in the correctness of their own arguments, foreign defense consortiums began developing and building what specialists have dubbed 'stealth helicopters'. Unique in many respects, the combat vehicles, fitted with a narrow fuselage, and bodies made out of composites and light alloys, have become the main attraction of arms exhibitions. One of the first choppers of this class was the Eurocopter Tiger – a joint development by French and German engineers. At exhibitions, developers often claimed that the Tiger's Kevlar hull and armored partitions would allow it to survive even hits from the 23-mm shells of the Soviet ZSU-23-4 Shilka [anti-aircraft gun]."

© AP Photo / Francois Mori
Eurocopter Tiger H61 helicopters perform their demonstration flight during the 50th Paris Air Show at Le Bourget airport, north of Paris, Thursday, June 20, 2013
© Sputnik / Alexei Fedoseev
Flight Tests of Russian New Ka-62 Multirole Helicopter to Be Conducted This Year
Of course, Yurov noted, "as a rule, experienced pilots with hundreds of flight hours in Afghanistan under their belts who know what it's actually like to fly under a hail of bullets…roll their eyes at such statements. On the question of what documented proof there is to back up such claims,  the Tigers' developers have politely kept silent, making reference to secrecy and the uniqueness of their project…"

In effect, "if one were to ask any pilot, especially those who had flown combat missions in Afghanistan, to detail what the four barrels of the Shilka are really capable of, the question of the expediency and reliability of using an ultralight strike helicopter will disappear of its own accord."

Speaking to Zvezda, Lieutenant-Colonel (ret.) Yuri Pogrebnyak, a veteran pilot who operated a Mil-24 helicopter gunship during the Soviet War in Afghanistan, said that advances in technology notwithstanding, it remains questionable whether the new tech justifies the light armor on the new light helicopter designs.

© Sputnik / A. Solomonov
A Mi-24 helicopter on a mission in the vicinity of the Kabul-Herat road

"During fighting, at times, we would come back to base with dozens of bullet holes from large-caliber machineguns. Our choppers would be out of service for a long time, and would take a long time to repair, but they always fulfilled their main task – the crew would make it back to the airfield. But the Mi-24 weighs over 10 tons! I'm afraid to even consider what would happen if a helicopter made of polymers was hit by a [23-mm round]. Such materials have advanced a long way, of course, but the old ammunition hasn't gone anywhere. It remains a big question who would emerge the winner in such a contest."

Even more curious, Yurov noted, was the fact that China already has a good helicopter gunship design at its disposal. This is the WZ-10, based not only on the Soviet and Russian experience in helicopter construction, but on the Italian A129 Mangusta design. "The WZ-10 even looks similar to the Italian helicopter, although it differs from it structurally." This includes the Chinese design's seven ton weight (nearly double that of the A129's four tons).

As for the Z-19 and its new export model, the Z-19E, Yurov suggested that this design does not seem to meet the demands of a modern war, "even of the smallest kind." From its power plant, to the fan-in-tail rotor design, to the concept of reduced visibility using electronics, "all of this is very similar to what the French and Germans attempted to create with the Tiger almost thirty years ago."

Furthermore, the analyst suggested that "the maximum take-off weight of 4.5 tons almost immediately clarifies the helicopter's combat capabilities. For comparison, the normal takeoff weight of a Mi-28N attack chopper, whose active use in tandem with Ka-52 Alligators in Syria is now being studied by foreign specialists, is nearly 11 tons. The armor on the Mi-28N's hull allows it to withstand high-explosive fragmentation projectiles with a 20 mm caliber, while the main rotor blades continue to operate even when struck by 30 mm shells and frag explosives."

Put another way, Yurov stressed that the Z-19 has a long way to go to reach the level of China's own WZ-10. "Nominally, the Z-19 has a good auto-cannon and guided missile weaponry. The 23-mm automatic cannon and up to eight ATGMs onboard can allow it to fight enemy armor. However, it remains a big question why China needed a helicopter with combat capabilities that are substantially inferior to [the WZ-10], a chopper that has already been adopted into service with the Chinese military."

© AFP 2021 / JACK GUEZ
Boeing Wins $488 Million to Refurbish UK Apache Helicopters
The answer, the observer added, is that the Z-19E may be a kind of 'probe' exploring possible global demand for Chinese military helicopters. But there are important circumstances worth taking into account which may limit its appeal, according to Yurov. "Major customers engaged in upgrading their air forces prefer to buy heavily armored and armed helicopters capable of taking on enemy tank groups and withstanding dozens of hits by bullets and several missiles. The Z-19, with all due respect to stealth technologies, cannot boast such indicators."

"The reality of modern war, even decades after the withdrawal of Soviet troops from Afghanistan, remains unchanged. The outcome of battles is determined by armor, armament and speed. The narrow fuselage based on polymer materials, modern Kevlar armored panels defending against 12.7 mm bullets – these are suitable for a short incursion and a quick departure for home, but not for a serious military operation," Yurov concluded.