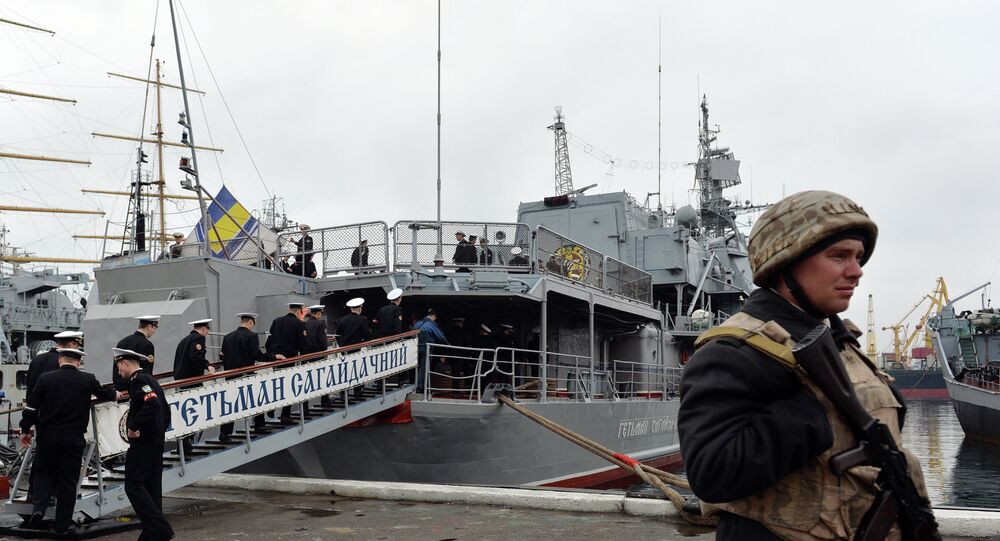 The Hetman Sahaydachniy, Ukraine's sole frigate and the flagship of the country's Navy, has broken down almost immediately after undergoing costly repairs. Speaking to Sputnik, military observer Alexander Perendzhiev said all the signs point to officials having simply stolen the money allotted for repair work.

Military prosecutors in southern Ukraine have initiated a lawsuit against a contractor in the port city of Mykolaiv. The company had been entrusted to repair the frigate's diesel engine propulsion system, but the engine broke down shortly after repairs were said to have been completed. Prosecutors say the company has failed to fulfill its obligations, and to deal with the engine defects under warranty in the agreed-upon timeframe.

"Taking into account the possible negative consequences for the combat readiness of the Ukrainian Navy, and with the aim of rectifying the legal violations, the military prosecutor's office has appealed to the court with a claim for the recovery of punitive damages…in the amount of 668,000 hryvnia [$25,000 US]," a press statement on the General Prosecutor's Office said.

© Photo : Russian Defence Ministry
234 Years of Naval Glory, and Counting: Russian Black Sea Fleet Marks Its Birthday
Ukrainian media previously reported that the Hetman Sahaydachniy had been sent in for repairs last week. The Defense Ministry was reported to have allocated a total of 14.5 million hryvnia (about $550,000 US) for the repair work.

Asked for comment, Russian security and military expert Alexander Perendzhiev, an associate professor at the Plekhanov Russian University of Economics, told Radio Sputnik that the story says a lot about the state of the Ukrainian military, and the country in general.

The expert noted that in normal practice, when a ship is accepted back into the Navy following repairs, it undergoes readiness checks, and tests to check the quality of repairs. Unfortunately, Perendzhiev added that "as we can see, in Ukraine today this concept either no longer exists, or exists only formally. I believe that this case seriously stinks of the theft of funds."

© Sputnik / Sergey Mamontov
Symbolic End: Missile Cruiser 'Ukraine' Being Sold Off for Scrap Metal
Pointing to the fact that the Leninskaya Kuznitsa Shipyard, the contractor responsible for the repair of the frigate, is owned by none other than Ukrainian President Petro Poroshenko, the observer noted that the present situation borders on the absurd. "Here we have the supreme commander-in-chief, who is supposed to be interested in a strong army and navy!" In this case, "everything came down to doing the repair work in such a way as to economize as much as possible, and to put as much as possible into [officials'] own pockets."

"But corruption cannot lead to anything good, particularly in the military sphere," Perendzhiev stressed. "What we are seeing here is a very vivid picture. This isn't just any ship, but the flagship of the Ukrainian Navy. If it is not ready for combat, what can be said about Ukraine's other ships?"