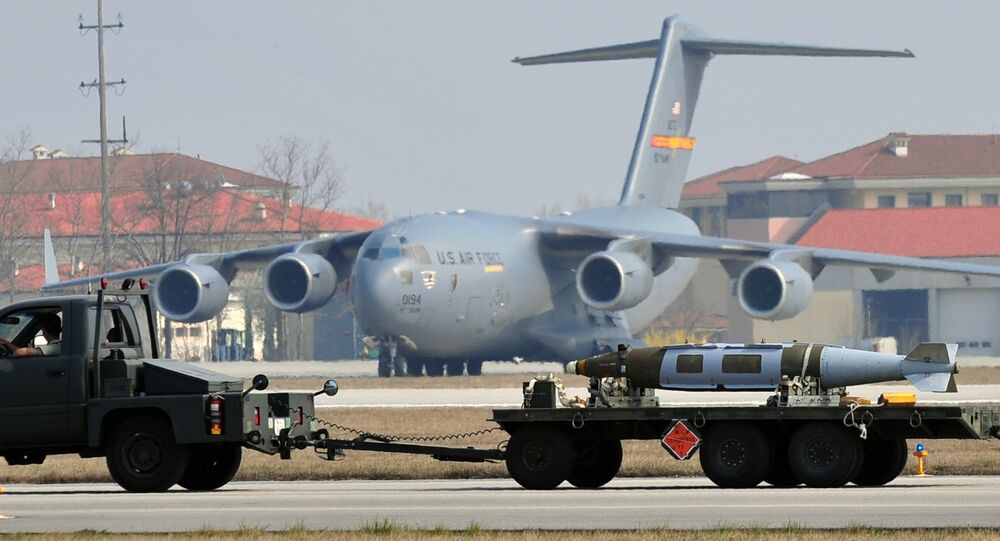 Although Italians have been opposed to Washington's military presence in the country due to major risks that it poses, Rome is unlikely to deal with this issue, journalist Fabrizio Di Ernesto told Sputnik Italia.

"Few people know that Italy stores US nuclear warheads at the Aviano and Ghedi bases despite the fact that the country signed the Treaty on the Non-Proliferation of Nuclear Weapons (NPT). The Italian government has not confirmed this. However, former US President Bill Clinton said this in a 2005 interview. The news did not cause a stir. There are approximately 70 nuclear bombs in Italy, a country which voted against nuclear energy at a referendum," the journalist said.

The NPT strives to prevent the spread of nuclear weapons and weapons technology, to promote the peaceful use of nuclear energy and contribute to nuclear disarmament. The treaty has been in force since March 1970.

© AFP 2020 / AL-MALAHEM MEDIA
Russians Think US, Al-Qaeda Most Likely to Use Weapons of Mass Destruction
Italy has stored US nuclear weapons on its territory as part of NATO's nuclear-sharing arrangement, which has seen Washington station its B61 nuclear bombs in non-nuclear countries. Aviano, a NATO base in the Italian region of Friuli-Venezia Giulia, is home to some 50 B61 bombs, while Ghedi, a base of the Italian Air Force in the region of Lombardy, is estimated to host between 20-40 B61 bombs.

In addition, US tactical nuclear weapons are stored in Belgium, Germany, the Netherlands and Turkey.

The B61, one of the Pentagon's primary thermonuclear weapons, is in the process of a major upgrade, with its latest version, known as the B61-12, successfully tested in April.

The US military presence in Italy poses other risks to the Mediterranean country.

"The US Navy's Mobile User Objective System (MUOS) was built in the commune of Niscemi, Sicily. It is a communications satellite system which functions thanks to five satellites and four antennas, located in Niscemi, Australia, Virginia and Hawaii. This complex helps all NATO armies to communicate. Since there are only four antennas, one can imagine how powerful they are to be able to transmit and receive signals. Numerous universities have warned that radio waves could cause cancer. Nevertheless, the project was carried out," the journalist said.

"Sadly, our politicians are fully dependent on Washington," he said. "I don't think that Italian politicians could oppose these bases, taking into account that they are mostly financed by the United States. One could say that the funds that Italy allocates on these bases come from NATO. Some politicians even urge to increase this spending since the more you give to these international organizations, the more you can count on their assistance. This is why no one wants to change anything."