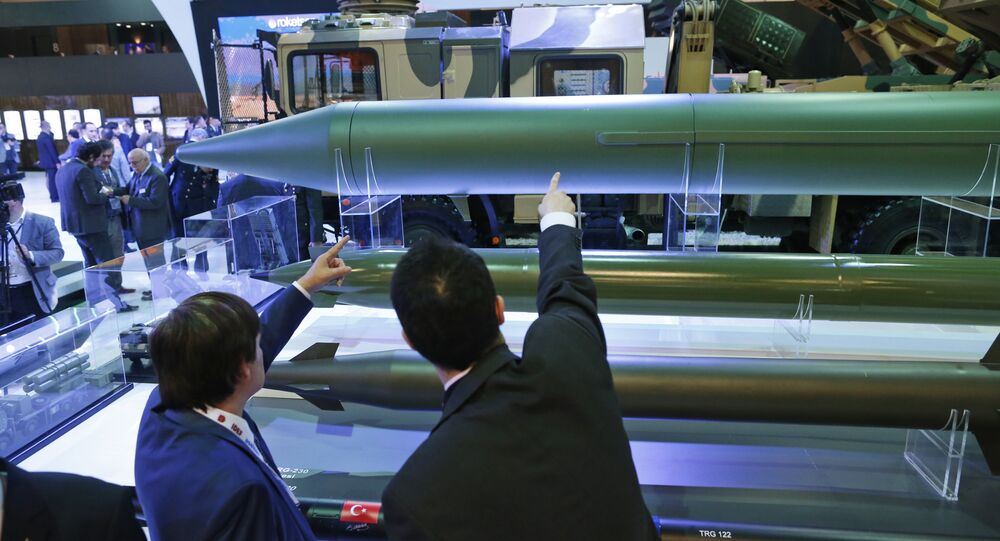 Turkey has successfully test fired a rocket using its state-of-the-art KAAN missile system for the first time; the weapons system is produced by the Turkish Armed Forces (TSK)-affiliated company Roketsan AS. The launch was made over the Black Sea and was watched live by the country's Defense Minister and the Undersecretary for Defense Industries.

© Sputnik / Mikhail Voskresenskiy
After Buying S-400, Turkey Aims to Work on Own Components for Air Defense Systems
"The missile launch was made from the province of Sinop on the Black Sea: the missile covered a distance of 280 km from the rocket launch and was watched live by the Minister of National Defense Fikri Isik and Undersecretary for Defense Industries Ismail Demir," said the reports of the Turkish media.

Developed by Roketsan, the missile has a 610-milimeter caliber and a 280-kilometer range. The system is able to deliver a 470-kilogram warhead to top-priority targets.

It was earlier showcased at the biennial International Defense Industry Fair (IDEF) where many brand-new products, including a record number of items made by Turkish companies, were on display.

According to the Daily Sabah, the KAAN missile "provides excellent fire support to maneuvering units by creating timely, accurate and effective fire and opening intense firing capabilities on high priority targets in all weather and terrain conditions, day and night."

The KAAN missile will be able to shoot targets precisely thanks to its inertial guidance system, which is supported by a Global Positioning System (GPS). It can be stored, transported and launched as an in-pod missile configuration, placed in an insulated pod.

© Sputnik / Dmitry Vinogradov
Why NATO 'Should be Glad, Not Critical' About Turkey Buying Russia's S-400
The launching of the missile can be carried out from other platforms with an interface suitable for integration with the ROKETSAN-produced KAAN weapon system.

KAAN creates a deterrent force with its long range and ability to fire intensively. In addition to standard tactical tasks connected with supporting a maneuvering unit, the KAAN weapon system can take on a number of crucial tasks with a wide range of uses ranging from peacekeeping operations to fire attacks.

Thanks to its high-tech navigational and automatic orienting systems, it successfully implements the "shoot-and-scoot" tactic. For this purpose, it includes a navigation system and automatic operating system, which is integrated with the weapons management system.

The weapons system is equipped with the mechanical, electrical and electronic subsystems required for activities such as preparation, planning, commissioning, ballistic calculation and orientation for execution of a shooting mission. The system can be designed in different versions depending on the user's logistics, infrastructure and case-by-case needs, including tools, radio, a power system, a navigational system and more, in different brands and models.