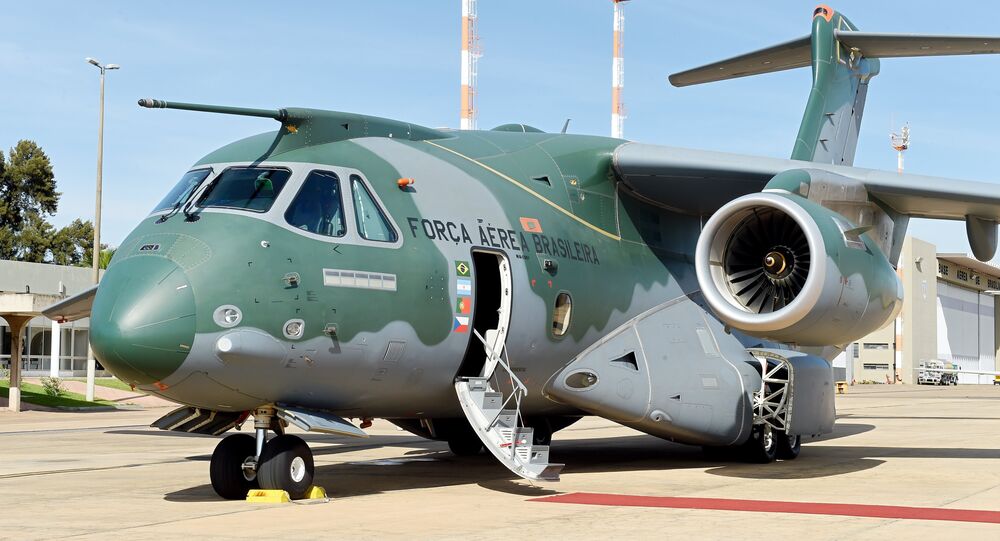 Sweden's much anticipated Saab aircraft deal with Brazil is making headway despite the economic crisis. However, Brazil has surprised Sweden with an intriguing counteroffer.

© AFP 2020 / Patrick Tragardh / SCANPIX
Arms Race Fears Roused in Sweden by Saab's Indiscriminate Campaigning
Brazil's recent economic troubles have put a question mark over its major deal with Saab, which is estimated at 41 billion SEK ($4.6bln) and is reportedly one of Sweden's largest export transactions in recent years. The deal also brings with it extensive industrial cooperation, especially between Saab and the Brazilian aerospace company Embraer.

During his visit to Saab's headquarters in Linköping, Brigadier General Márcio Bruno Bonotto, the head of the Brazilian Air Force purchasing department, said that the high-priority project would continue as planned due to strong political support.

"Even though we are amid a financial crisis, the Gripen affair is a priority. We also have the financial support to ensure Gripen deliveries on time and as planned," Márcio Bruno Bonotto said, as quoted by the Swedish daily Svenska Dagbladet.

​In addition to an update of the country's air force, Brazilian politicians have been striving to obtain Saab's technical know-how as part of the deal. In the long term, Brazil expects to acquire significantly more Gripens, with earlier military estimates indicating a need of up to 100 aircraft. The remainder, however, are unlikely to be produced at Saab's plant in Linköping. The final decision on the total number of fighter jets to be acquired will be made after the first 36 planes have been shipped, whereupon the need for additional capacity will be evaluated.

"We would not want to be in the position when our partners never buy our products, and would like to make a bid. The KC-390 is a spectacular plane and it would be great if Sweden acquired them," Márcio Bruno Bonotto said.

At present, however, Sweden is performing an upgrade of its Hercules fleet, which would prolong the planes' lifetime until 2030.

'Although we have a financial crisis in Brazil, @Saab Gripen is our priority' — Brig Gen Bonotto, President, COPAC. pic.twitter.com/vJjtTotC8B

​The Embraer KC-390 is a medium-size twin-engine jet-powered military transport aircraft, able to perform aerial refueling and to transport up to 29 tons of cargo and troops, including wheeled armored fighting vehicles.

© Photo : saabgroup.com
Sweden's Saab Suffers Setback Selling Submarines as Poland Opts Out of Partnership
Meanwhile, Saab's officials have been optimistic about its sales amid growing international tensions and terrorist threat, Svenska Dagbladet reported. According to Saab CEO Håkan Buskhe, the sales of defense equipment can increase by 20-30 percent in Europe alone. He also identified the US and NATO as the largest defense markets.

Håkan Buskhe pointed out, among other things, that several NATO countries had made it clear that they wanted to meet the common goal of defense expenditure of at least 2 percent of the GDP, which naturally boosted Saab's expectations.

At the moment, Saab is underway with several major projects, such as developing new submarines for the Swedish defense, new combat aircraft of the Gripen family and, together with Boeing, launching a new school airplane with an intention to sell it to the US Air Force.