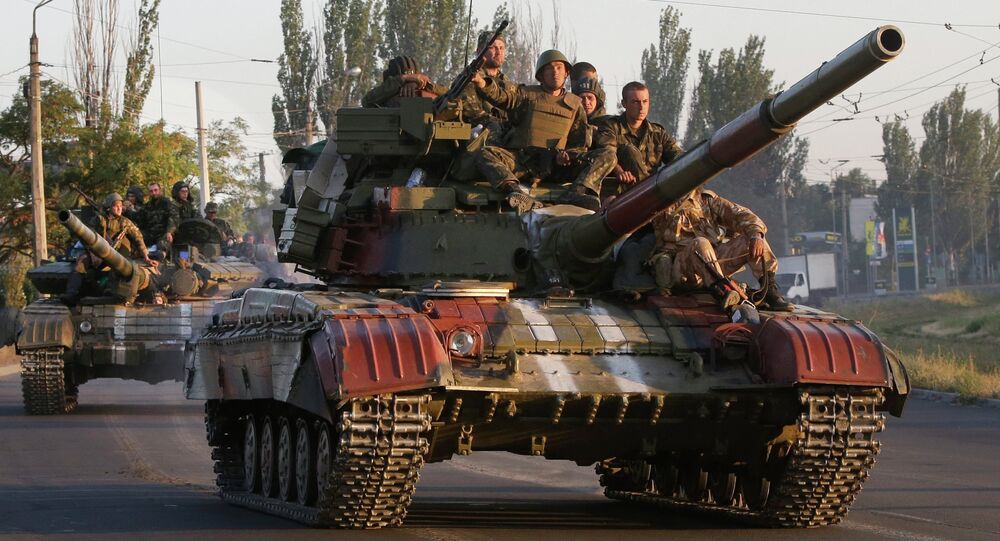 Defending Europe Against Russia? 'For Every 100 Tanks Ukraine's Got, One Works'

In a rare moment of honesty, Ukrainian Armed Forces officials took time out to criticize the sorry state of the country's army, particularly its military equipment and weapons stocks. This follows Ukrainian President Petro Poroshenko's fantastical claims that Ukraine's army was "the only reason" Russia has not yet begun an invasion of Europe.

Speaking at a forum on security defense issues earlier this week, Ukrainian Ground Forces acting head of logistics command Ivan Voloh complained that many problems have been identified with Ukrainian weapons and military equipment, including the BTR-4E, an 8x8 wheeled armored personnel carrier, the 120mm 'Molot' mortar system and the KBA-48, another mortar.

Voloh noted that the serious flaws in the mortars' design and build quality were not only causing them to become useless in battle, but leading to battlefield casualties (including seven personnel killed), five of them in the ongoing civil war in eastern Ukraine. As for the BTR-4E, the official complained that the vehicle has proven itself to be the most problematic piece of equipment in Ukraine's arsenal, with frequent failures leaving dozens of machines out of whack.

The Armed Forces' complaints about the state of their weapons comes amid recent boasting by Ukrainian President Petro Poroshenko, who said at a forum in the UK last month that together with anti-Russian sanctions, "the resistance of the Ukrainian army" is "the only reason Russian tanks are not much further into Europe."

© Sputnik / Stringer
A Lousy Shot: Ukrainian Army Complains About US-Made Shoddy Cartridges
For almost three years now, Poroshenko has repeatedly claimed that thousands, tens of thousands or even hundreds of thousands of Russian troops were occupying Ukraine's breakaway Donbass region. Moscow, naturally, has denied the claims. Recently, even Ukrainian lawmakers have begun to ask for proof.

Independent observers have chalked the failures of Kiev's military campaign against its eastern breakaways down to immense corruption, low morale due to forced conscription, and, as fate would have it – poor training and equipment. As for the claims of a Russian presence in eastern Ukraine, analysts pointed to the Russian anti-terrorist operation in Syria, saying that it was a demonstration of how the modern Russian military actually operates, in case anyone in Kiev has any doubts.

© AFP 2020 / ANATOLII STEPANOV
Ukrainian servicemen aim a mortar from their position near the eastern Ukrainian village Pisky, Donetsk region. File photo
© AFP 2020 / Evgeniy Maloletka
Saber-Rattling: Ukraine Building Up Military Presence Near Crimea
Speaking to Radio Sputnik about the current state of the Ukrainian military, Russian military expert Alexander Perendzhiev said that he believes there are at least two reasons for Ukrainian military officials to be making such frank statements.

"To be honest, I was a little surprised," Perendzhiev admitted. "Officials had long been silent on this issue. The fact that they are speaking about this now – I would say there are two points here: The first is that the leadership of the military understands why their equipment is of substandard quality: the budget is simply being stolen, while soldiers and officers are used as a bargaining chip. On their health, and sometimes even their lives, those who manufacture these weapons and military equipment are making a profit. And they are trying to convey this fact to the top military and political leaders."

The second issue, according to the expert, has to do with the fact that while the military has been given its marching orders, "there's really no [tools] with which to actually fight. Realizing these problems, in my opinion, is what caused this public commentary."

In the meantime, Perendzhiev recalled, officials in Kiev continue with their bombastic rhetoric about the creation of new, cutting edge military equipment and weapons systems.

"Kiev will say that they have a hundred tanks, but in reality, only two of them will be capable of driving, and one of them capable of shooting. I would call this a PR stunt, Ukrainian-style," the expert said.

© AFP 2020 / YURIY DYACHYSHYN
Bumbling, Gun-shy NATO Instructors on the Brink of Getting Laughed Out of Ukraine
"We see the same thing with the example of North Korea," Perendzhiev added. "There too there is little to show in terms of overall socio-economic development. But they're constantly trying to show how the country is developing some new weapon, piece of equipment, even a satellite of some kind to be launched into space. Except we keep hearing about things constantly exploding…"

"Something similar is happening in Ukraine; except whereas everyone [in the West] is paying attention to North Korea for some reason, in the case of Ukraine they think that everything is fine," Perendzhiev concluded.