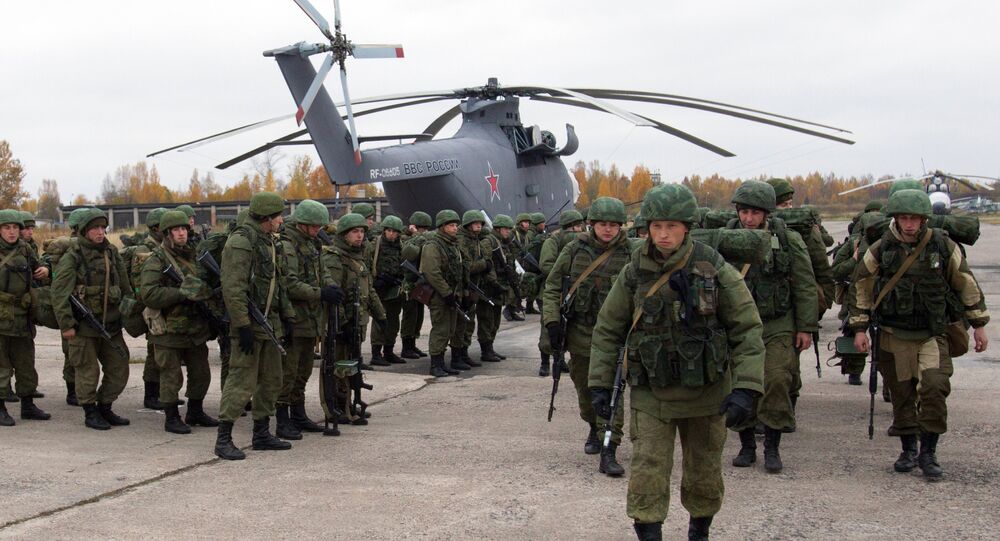 The Pentagon is busy crafting a new combat operations doctrine, to be presented in the fall. Pointing to US officials' own words, Russian military observer Alexander Khrolenko explains that the new doctrine is ultimately meant to try and shore up US-led unipolarity amid the pressures posed by growing Russian and Chinese military strength.

Earlier this week, The National Interest provided new details on the US Army's plans to adopt a new and improved combat doctrine, known as FM 3.0 Operations.

NI wrote that the doctrine, to be presented in October, is designed to allow the US to engage in large-scale, mechanized force-on-force warfare against "technologically advanced, near-peer rivals – such as Russia or China," which are currently estimated as being "able to substantially challenge US military technological superiority."

Stripes.com
US's Latest ICBM Test: Message for Pyongyang, or for Moscow and Beijing?
This follows on indications from earlier this year that Washington would be reviewing and possibly revising the US doctrine on the use of nuclear weapons, with Russian officials and analysts speculating that the review may lead to a lowered threshold for the use of nuclear weapons, and perhaps even allow for preemptive nuclear strikes.

According to RIA Novosti contributor Alexander Khrolenko, that document already outlines the unilateral use of force to deal with a broad range of threats, discusses the training and equipping of the US military and its allies, NATO's modernization, and the training of future political and economic elites around the world.

"It's worth noting," Khrolenko noted, "that these documents remain quite relevant today, and that they weren't created by some Good Samaritans. So what's the problem?"

This week, NATO Supreme Allied Commander US Army Gen. Curtis Scaparrotti told a Senate Appropriations subcommittee that the US military was transitioning back "to our historical role as a war fighting command."

© REUTERS / Ints Kalnins
‘We Always Want Diplomacy’: US Top Brass in Europe Demands More Troops to Counter Moscow ‘Threat’
Accusing Russia of posing numerous threats to regional and global security, Scaparrotti bluntly argued that in the US estimation, "a resurgent Russia has turned from partner to antagonist as it seeks to undermine the Western-led international order and reassert itself as a global power."

In other words, Khrolenko wrote, the message seems to be that "a strong Russia is a priori a threat."

"And generally, the strategy is clear: to organize an echeloned military and economic blockade of our country with the goal of depleting its defensive resources," with the ultimate aim being "if not eliminating, then limiting its sovereignty," the journalist added.

© AP Photo / Andreea Alexandru
Servicemen of the "Fighting Eagles" 1st Battalion, 8th Infantry Regiment, walk by tanks that arrived via train to the US base in Mihail Kogalniceanu, eastern Romania, Tuesday, Feb. 14, 2017.

Pondering the practical implications of the Pentagon's efforts to update its military doctrine, Khrolenko noted that most likely, they would "try to synchronize — to incorporate several operational strategies created to respond to regional threats and future challenges into a single system." In other words, the military will be tasked with learning how to act in concert, simultaneously across multiple sectors of combat deployment.

© Sputnik / Aleksey Nikolskyi
Putin-Trump Phone Call: 'Positive First Step, but No Need to Get All Worked Up'
What's the reason for this sudden urge to improve US military capabilities across all areas? To begin with, Khrolenko recalled that in its 2006 National Security Strategy, US strategists focused on the elimination of potential threats, including those states and actors that deny the concept of 'American Exceptionalism.'

According to the journalist, this sense of exceptionalism "requires a global awareness: that the United States is morally superior to all other states, and that it is moving along a special historical path, outside the laws and norms governing other countries. For those that would doubt this principle there are carrier strike groups, Tomahawk missiles and other military arguments – on land, at sea, in space and in cyberspace, all linked by one center."

But things have changed since then, Khrolenko added. "The US military is no longer the only force in the world which has access to long-range precision-guided weapons. Russia and China now restrict the US's access to many parts of the world; they are developing fifth-generation stealth fighters, creating advanced air defenses, and a broad range of anti-ship missiles, capable of striking US vessels at distances of over 1,500 km. This puts into question the US's military-technological superiority."

And Russian and Chinese military engineers aren't the only ones to thank for this global shift, either the analyst stressed.

"Over its years of engaging in local operations in the Middle East, the Americans forgot how to fight with enemies of equal strength; the Pentagon continues to see the prospects in being prepared for conflict based on the superiority of its technology…on the development and promotion of the operational concept of Multi-Domain Battle, the essence of which is a flexible response to complex and rapidly changing threats in all areas."

© REUTERS / Ammar Awad
US. army soldiers stand next a military vehicle in the town of Bartella, east of Mosul, Iraq, December 27, 2016

"Today," Khrolenko wrote, "the US is deploying a global missile defense system and space-based means of attack aimed at neutralizing the Russian and Chinese ballistic missiles carrying those countries' nuclear potential."

Ultimately, the analyst emphasized that unlike US planners, who make preparations "to launch a global strike against any other country, Russia allows for the use of military force (including its nuclear weapons) only in response to aggression against itself or its allies – and only when peaceful means for resolving a conflict have been completely exhausted."

Furthermore, according to Khrolenko, the fact that "the US views China as a military threat in conjunction with Russia objectively increases the chances of victory for the latter" in the event of conflict.

"It was Bismarck who first warned against a war on two fronts, and since then no one has succeeded in achieving victory in a 'multi-domain' situation. Meditation on the subject of America's exceptionalism won't help on the battlefield. It's clear that the US is beginning to lose the geopolitical confrontation with Russia and China, but they cannot change the tactics of hostility, even though there is no objective basis for this hostility. Their strategy remains limited to trying to improve their 'big stick'," to use Theodore Roosevelt's term.

Finally, Khrolenko noted that the differences in ideology guiding the major powers' worldview are worth taking into account. "Moscow refuses to threaten others not out of weakness, but because it sees itself as a part of a multipolar world. Is it really worth it for Washington to invent new military strategies…to search out reasons for conflict?"

So long as the ideals of American Exceptionalism, combined with neoconservative/liberal interventionist ideas on the need to impose the Western model on others continue to influence US policymakers' thinking, the answer is obvious.