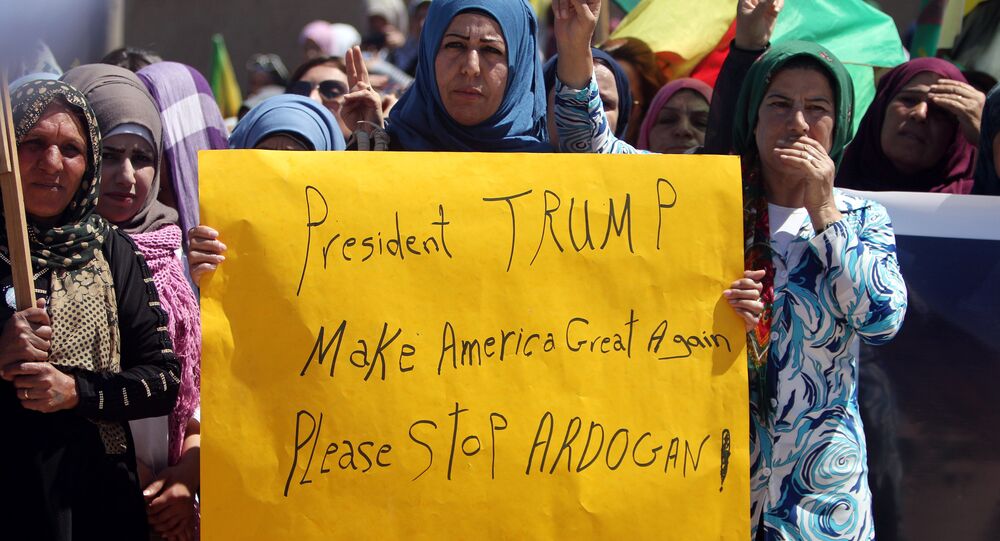 Turkish airstrikes on Kurdish YPG and PKK groups in Iraq and Syria seem to risk widening the rift between Ankara and Washington. Could they lead to a greater conflict – or just the opposite?

​Speaking to Radio Sputnik's Brian Becker, Shakdam underscored that while this conflict between Turkey and the Kurds — a war within a war — has been going on for quite a long time already, this is the first time that US troops have patrolled the Turkish-Kurdish border. The fractured relationship between Turkey and the US is what makes the latest news important.

Turkey is NATO's second largest military, Shakdam noted, and the US maintains that NATO is not involved in Syria. According to her, Turkey's behavior challenges US authority within the alliance — a sign of the alliance's weakening from within.

"The US was quite keen to play the Kurdish card because the US does not like a superpower — and Turkey is a superpower — without having some form of a counterbalance," Shakdam told Becker.

"The US does not want to give too much power to anybody."

"The US are really good at creating enemies wherever it needs to," she said, adding that Ankara is likely very aware of the US strategy.

© REUTERS / Umit Bektas
Erdogan Warns 'Goodbye' to EU if Accession Chapters Not Opened
While Washington may not use the Kurds for a direct attack on the Turkish war machine, they might not even need to, instead using Kurdish YPG groups to dig into Syria, perhaps even to retake Raqqa from Daesh.

"I would not be surprised," Shakdam says of this scenario, adding that the US has been trying to get into Syria since the beginning of the civil war back in 2011. According to Shakdam, the very "revolution" that happened in 2011 was "engineered to be violent."

The ultimate goal of the US in the region, she said, is to balkanize the Middle East, as that would make it easier for the US to control the region, playing factions against one another.

While Turkey is arguably the most powerful military in the Middle East, it's followed closely by Syria and Egypt. Both Egypt and Turkey understand that, should Syria fall, they will be "kind of next," according to Shakdam.

That being said, Turkey's interest — to rebuild its empire — directly contradicts that of the US.

Ankara has already made it clear that it is willing to go to great lengths to protect its neo-Ottoman dream against American efforts towards Balkanization.

Thus, ironically, one way to fight US influence would be for Turkey to withdraw from Syria, stopping its creeping intervention and returning to a policy of non-intervention. That would allow Assad to regain control and drive out Daesh faster, which would put the US in a very uncomfortable position, Shakdam speculates.

"It is still very possible," she said.

US Greatly Understates Number of Deaths Caused by Its Airstrikes in Syria, Iraq

Syria Conflict Could Be Resolved Only Through Talks - Putin