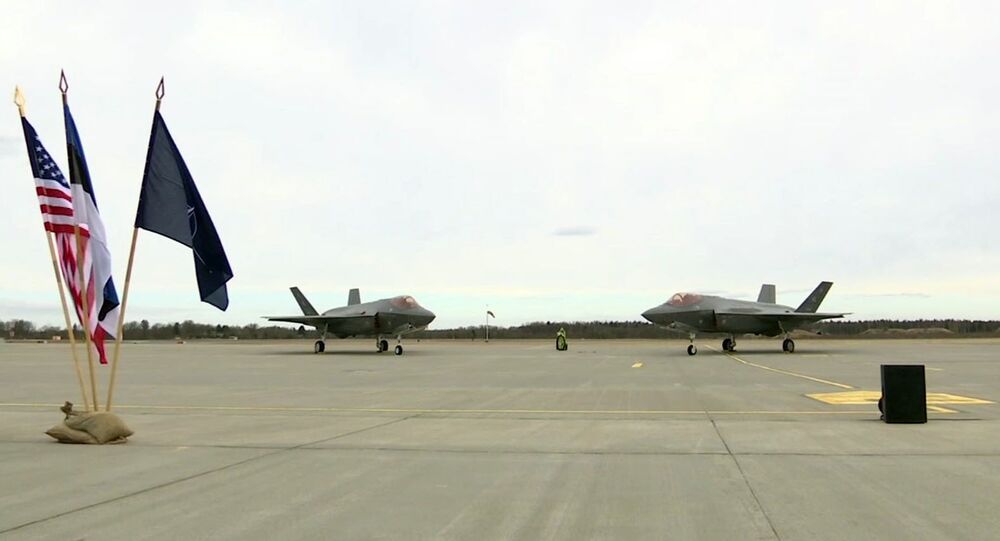 The US Air Force has deployed its F-35 fifth generation fighter jets to Estonia, within 200 km from the Russian border. Moscow says it considers NATO air patrols in the Baltic a threat to regional security. Russian military analyst Alexander Khrolenko breaks down the 'message' Washington is trying to send, and Moscow's likely response.

On Tuesday, USAF Chief of Staff Gen. Dave Goldfein announced that a pair of US Air Force F-35 Lightning IIs had arrived in Estonia for 'interoperability' training with the US's NATO allies. The F-35s set down in Amari airbase, about 25 km outside the Estonian capital of Tallinn, and about 300 km from the Russian northern capital of St. Petersburg.

© AFP 2020 / HO/US NAVY/ MCS2D
US F-35 Fighter Jets Arrive in Estonia
The planes' deployment was not announced ahead of time, leading Russian political and military observers to conclude that this was another deliberate effort to aggravate relations with Moscow.

On Wednesday, Russian Defense Minister Sergei Shoigu warned that Moscow considers the spike in NATO air activity over the Baltic a threat to regional and global security, and a part of the alliance's strategy of aerial denial, covering the Russian exclave region of Kaliningrad and the eastern Baltic Sea.

Eager to gloat over the F-35s' deployment, Estonian officials considered their presence so significant that they sent Defense Minister Margus Tsahkna to greet them in person. "This is important to send this message that this is the border of NATO. This is the eastern border of our values that we are ready to protect," Tsahkna told reporters.

The Russian-language edition of Voice of America, meanwhile, characterized the F-35 deployment as a measure to "assure allies and partners in the US's commitment to peace and stability in the region."

The USAF plans to begin fielding F-35s in Europe on a permanent basis in 2020. Until then, the new $1 trillion aircraft will see short-term deployments spanning a few weeks at a time to participate in joint exercises with other US and NATO aircraft in what CNN calls the "contested airspace" of the Baltic region.

The real question, says military analyst and RIA Novosti contributor Alexander Khrolenko, is what's actually behind the appearance of the F-35s at an Estonian airbase.

#VIDEO: #US army deployed the modern F-35 fighter jet to #Estonia. The #Baltic state is the neighbour state of #Russia. pic.twitter.com/x8w9szVHXl

© RIA Novosti . Ilia Pytalev
Just Try It: Influential US Think Tank Recommends Attack on Russia's Kaliningrad
Formally, the analyst recalled, the deployment is being conducted under NATO's so-called European Reassurance Initiative, which began three years ago and quickly took on a rather shape which looks neither defensive nor reassuring.

"The F-35 is a multipurpose combat aircraft with the capability to carry nuclear weapons on board. It can be assumed that these planes arrived in Amari to engage in force projection and to increase US arms sales in Europe, not engage in peaceful encounters with Russian Su-35s," Khrolenko added.

Pointing to US and European reporting on the F-35s' Estonia deployment, Khrolenko stressed that even Western media seems to realize its deliberately provocative nature. The US's Washington Examiner, for example, headlined its piece "US deploys F-35s to Putin's doorstep amid Russia tension." British tabloid The Sun, meanwhile, went all out, headlining their piece "Flying in His Face: Donald Trump's UK-based F-35 jets land on Vladimir Putin's doorstep to join NATO taskforce in Estonia."

Trump, Khrolenko recalled, recently told hawkish US senators Lindsey Graham and John McCain that he would be pushing 'push back' against Russia's rising global influence. That's a far cry from President-elect Trump's attitudes, when he criticized the pair of neocons for "always looking to start World War III."

© Sputnik / Ramil Sitdikov
Tough, Cost-Effective, Timely: Russian MiG-35 to Be Armed With Laser Weapons
As for the tools and methods used for this 'push back', they look rather monotonous, according to the analyst.

"Perhaps to normalize the military-political situation, Russia should reciprocate by stationing its newest fighters in Cuba or some other Latin America?" the journalist quipped. After all, "Russian Defense Ministry officials did meet with their colleagues from Paraguay, Nicaragua and Brazil in Moscow on Wednesday," he added.

The F-35 is a plane with a long and complicated backstory, Khrolenko noted, with small parties produced for nearly half-a-decade, but deployed and sold abroad only in the last couple of years. The first USAF F-35 deployment abroad took place only in January, when a batch of planes were sent to Japan. In the Middle East, Israel was the first to get its hands on the aircraft, picking up two F-35s at $100 million apiece in 2016. This week they received another three planes, which will be modified with US electronics, targeting and missile systems. Lockheed Martin has also entered into a $450 million contract with South Korea, which will receive three F-35s.

© Photo : Lockheed Martin
NeverEnding Story: Pentagon Awards $109M to Upgrade F-35's Hardware, Software
As for the US itself, the Pentagon plans to purchase 63 F-35s for the USAF in 2017, producing up to 2,500 planes over the next few decades, with the plane expected to become the backbone of US tactical aviation. But as is well-known, the family of multifunction stealth fighter-bombers, which includes variants for the army, a VTOL variant, and a carrier-based version, has faced so many problems that it has become the go-to example of wasteful military spending.

"The family of aircraft looks solid, but from the beginning was fitted with so many contradictory demands that its designers and the plane itself soon began to clash with the laws of physics and aerodynamics," Khrolenko wrote. "For example, the F-22 fighter, created earlier than the F-35, surpasses it in terms of maximum flight altitude, cruising speed (over Mach 1.8, compared to the F-35's Mach 1.6, respectively), maneuverability and turning rate." Other problems include constant software glitching, extremely high exploitation costs and the 'stealth' plane's visibility to Russian air defenses.

Khrolenko stressed that with the F-35, the US has long come to accept the maxim of 'another year, another billion dollars'. The same is true for Italy, Denmark, the UK, the Netherlands, Canada and Turkey, who are also involved in financing the program.

© Flickr / Gonzalo Alonso
I See You: Russian-Made Sunflower Radar is Capable of Detecting F-35 Jets
US defense analysts have admitted that to win air combat, the relatively slow F-35 will have to avoid engaging in dogfights with fourth generation planes, depending instead on the plane's "stealth, onboard and offboard sensors and smart tactics" to avoid getting shot down. That being said, "the real threat to American air power in most regions…is not enemy air power – but rather advanced enemy integrated air defense systems."

This includes those of Russia, which has already developed over-the-horizon radars capable of detecting F-35s "as clearly as WWII-era aircraft," rendering their stealth capabilities a moot point.

"But marketing is another story," Khrolenko stressed. "The failure of the American military industrial complex can be compensated by the growth in sales of the F-35 in Europe and across other continents. After all, that's what allies are for."

Meanwhile, the analyst added that Russia's much more cost-conscious PAK FA program, production of which is also ramping up, means that the "Pentagon would best avoid arranging 'dances with swords' over skies of the Baltic, which will allow it to avoid technological humiliation and losses, and not just reputational ones."

This is F-35's Weak Spot That Russian Radars Could Exploit