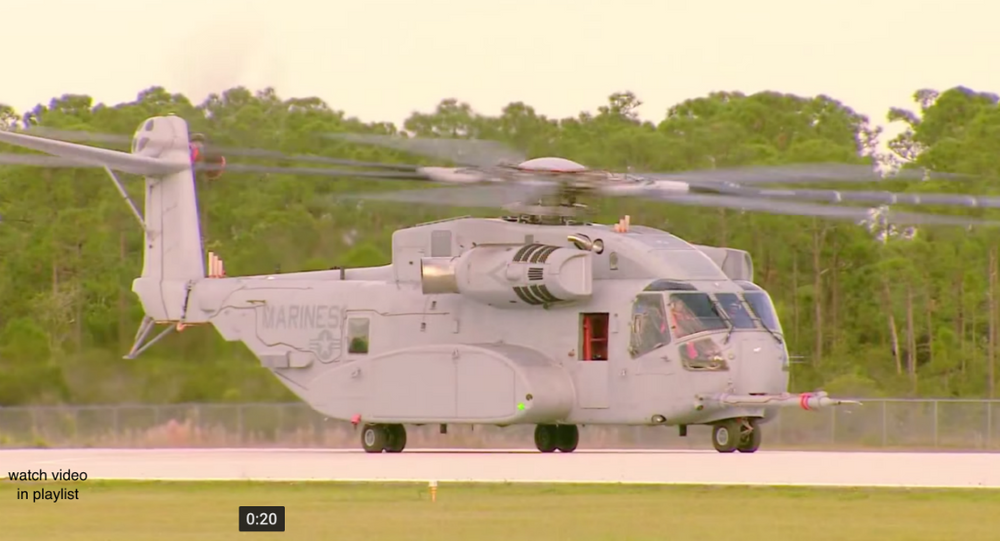 The next-generation heavy-lift US Marine Corps helicopter doesn’t just have a super macho name — its costs are huge, too.

There’s little reason to think this is the last time the Pentagon will come asking for more money for one of their grandiose defense programs. In an interview with Defense News, Col. Hank Vanderborght casually revealed that acquisition costs for the King Stallion helicopter jumped from $26.1 to $27.7 billion, basically chump change in comparison to the hundreds of billions budgeted for the Defense Department annually.

But for taxpayers, $1.6 billion is a big deal. With $1.6 billion, you could buy 200 million Chipotle burrito bowls. Vanderborght, however, is “not concerned” about the rampant cost growth.

According to the Defense News report, Vanderborght disclosed that the the “average recurring flyaway cost” for the Pentagon to buy a King Stallion is purportedly stable at $87.1 million per unit, but government procurement officials told Sputnik that “unit costs” like this are perennially misleading — the Pentagon, and by proxy taxpayers, always cover big chunks of research and development costs, too.

If you factor in these extra costs and back out a new “unit cost” that includes all kinds of auxiliary expenses, the “program acquisition unit cost” soars all the way to $138.5 million per aircraft, Defense News noted

In 2016, the Government Accountability Office produced a report on the King Stallion, a contract, of course, awarded to a Lockheed subsidiary, that found the unit price for the choppers was 14 percent higher than “baseline” estimates. On March 15, a Sputnik report pointed out that Congresswoman Niki Tsongas of Massachusetts said the unit cost had jumped again, and that now that Stallion would run 22 percent more per helo than the “baseline.”

The Marines plan to acquire 200 of the aircraft. “That cost growth multiplied 200 times is a heck of a lot of money,” Tsongas said. Indeed, Sputnik calculated that it amounted to $5.4 billion in new costs.

“Even if there is no additional cost growth, it seems worth pointing out that $122 million per aircraft in 2006 dollars exceeds the [2017] cost of an F-35A aircraft for the Air Force by a significant margin,” she said.

“We’re doing a lot of good things to control it,” Vanderborght said, in reference to the costs of the program. “I think that the things we’re doing to control it are working,” he added. Unfortunately there’s not much evidence to show for it, despite Vanderborght’s best attempts to downplay the significance of the story.