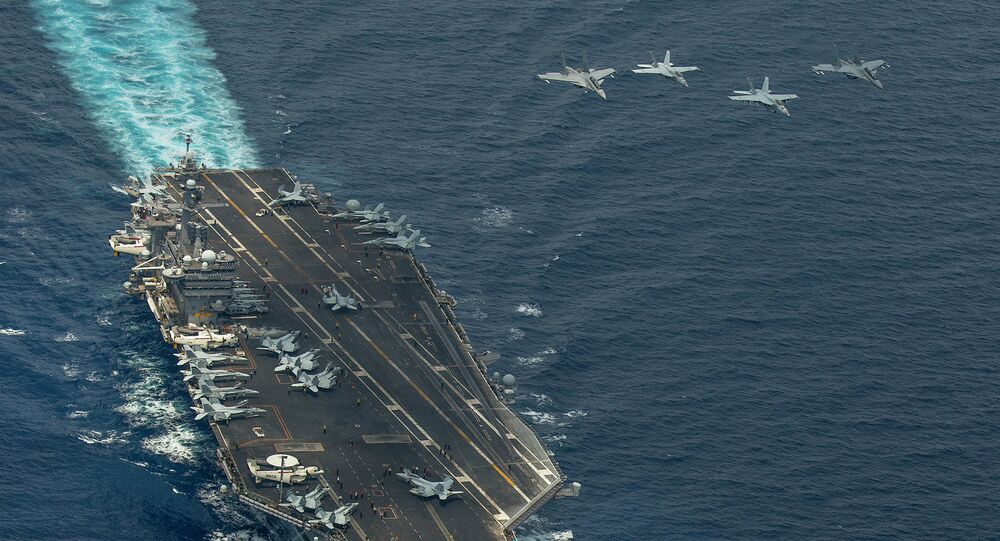 According to the US Navy, a F/A-18E jet based on the US Carl Vinson aircraft carrier crashed near the Philippines.

WASHINGTON (Sputnik) — A pilot flying an F/A-18E combat aircraft ejected safely from his cockpit on landing approach to the aircraft carrier Carl Vinson and was recovered unharmed by a helicopter rescue crew, the US Navy said in a press release on Friday.

"A pilot safely ejected and was quickly recovered by a helicopter assigned to [helicopter squadron] HSC-4 aboard USS Carl Vinson while conducting routine flight operations during a transit in the Celebes Sea," the release explained.

© REUTERS / Yonhap
Heading Where? USS Carl Vinson Spotted Near Indonesia, Not Korean Peninsula
The incident took place in the Celebes Sea in the western Pacific. The Philippines, Malaysia and Indonesia border the body of water. The distance from the Celebes Sea to the South Korean port of Busan is about 2300 miles.

The incident occurred as the F/A-18E assigned to Carrier Air Wing 2 was on final approach to the Carl Vinson, the release explained.

The incident is under investigation and the pilot under review by the Carl Vinson's medical team.

After it turned out that the Carl Vinson deployed to deter North Korea did not reach the Sea of Japan reportedly because White House and Pentagon failed to communicate effectively and was spotted near Indonesia, it was reported that it will finally reach the Korean Peninsula later this month.

Earlier, US President Donald Trump said that an "armada" is heading to the Korean Peninsula's shores amid a tensions with North Korea had escalated.