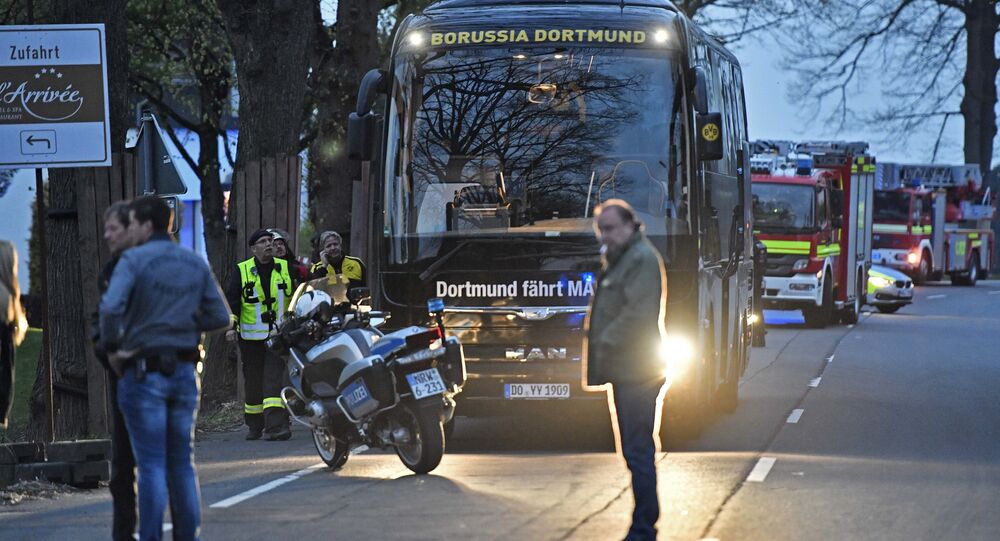 Dortmund Attack Explosives May Have Come From German Military

Following three explosions near a tour bus carrying players for the Borussia Dortmund football team, investigators have revealed that materials used in the bombs are likely to have been acquired from the German armed forces.

The bus, carrying Dortmund players to a Champions League game against Monaco last Tuesday, was en route when three pipe bombs planted by the roadside were detonated, damaging the bus and injuring one player and a police officer.

According to a report by German media outlet Welt am Sonntag, the pipe bombs and their manufacture required a level of expertise and access contingent with military training.

"The explosives in the pipe bombs, which were filled with metal pins, might have come from the stocks of the German armed forces," it was reported, cited by Deutsche Welle.

Police and investigators in the country warn that similar attacks are possible, as the German Federal Criminal Police Office (BKA), while not confirming a specific threat, stated that all lines of inquiry were still on the table, according to DW.com.

As reported by Welt am Sonntag, large-scale cultural events, including music festivals and football games, are particularly at risk.

An anonymous email received by Berlin newspaper Tagesspiegel claimed that the Dortmund attack was a "final warning," and that another attack was planned in Cologne on April 22, a day set for a large-scale protest event against the right-wing nationalist Alternative for Deutschland (AfD) party.

Early reports following the bombing pointed to Islamist Daesh sympathizers being responsible, but the investigation revealed Friday that it has "significant doubts" that there is any Muslim extremist connection, as reported by the Süddeutsche Zeitung newspaper.

Security has been increased at Dortmund games, including Saturday's match against Frankfurt, in which the latter was beaten by the home team 3-1.

One of the top-winning teams in the history of German football, Dortmund is a member of the Bundesliga, the country's top football tier.

What MLK Would Have Thought of Trump's Bombing Campaigns