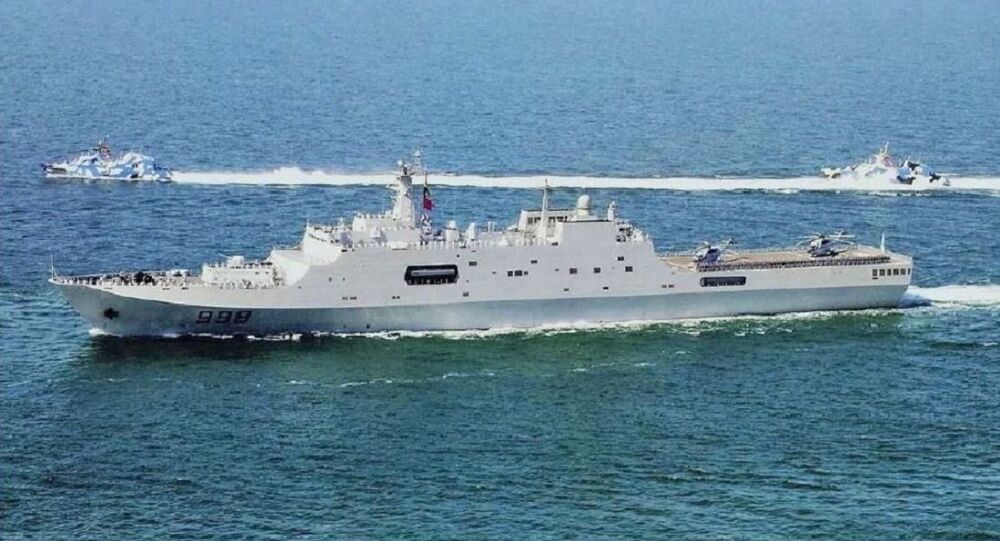 © AP Photo / Xinhua, Zha Chunming
China Reveals How Many Fighter Jets the New Aircraft Carrier Can Dock
The 075, larger than any other amphibious assault ship in service with the Chinese military, is being built by Shanghai-based Hudong-Zhonghua Shipbuilding.

According to the report, the vessel will be able to carry helicopter capable of attacking enemy ships, ground forces and submarines.

The construction was launched amid the ongoing tensions in the South China Sea. The People’s Liberation Army (PLA) has also intensified naval patrolling near Taiwan amid "strained ties" with the island government, according to the report.

Previously, smaller amphibious assault ships have been deployed to Fiery Cross Reef and other artificial islands in the South China Sea, including the 071 20,000-ton vessel.

"Construction of the Type 075 ships will take two more years. The first vessel may be launched as early as 2019 and put into full service in 2020," a source said.

For comparison, the United States Navy’s new America-class amphibious assault ship has a displacement of 43,745 tons and can carry various attack helicopters and the F-35B VTOL fighter jet.

The Macau-based military observer Antony Wong Dong noted that the Type 075 ships are comparable to the capabilities of the US Navy’s previous class of amphibious assault vessels, the Wasp-class.

"China has so many giant warships, including four Type 071 amphibious vessels and two aircraft carriers, but its vertical landing capability is still limited due to a lack of the largest helicopter dock vessels. The launch of Type 075 will let the navy become the world’s No 2 powerful navy after the US," Wong told the South China Morning Post.

In recent years, the Chinese navy turned from a small fleet into a formidable force aimed at gaining dominance in the Pacific. In the 1990s, Beijing launched several projects of advanced submarines, destroyers, frigates and corvettes.

© AP Photo / Xinhua
China Building Potential Military Asset on Paracel Islands in South China Sea
In 2012, China’s first aircraft carrier, the Liaoning, was commissioned. The ship was originally laid down as a Soviet multirole aircraft carrier under the name Riga and then Varyag. China bought it from Ukraine for $25 million.

On April 23, China is due to launch its first domestic-built aircraft, the 65,000-ton Type 001A. It will be launched on the 68 anniversary of the PLA’s Navy and Chinese President Xi Jinping is expected to visit the launch ceremony.