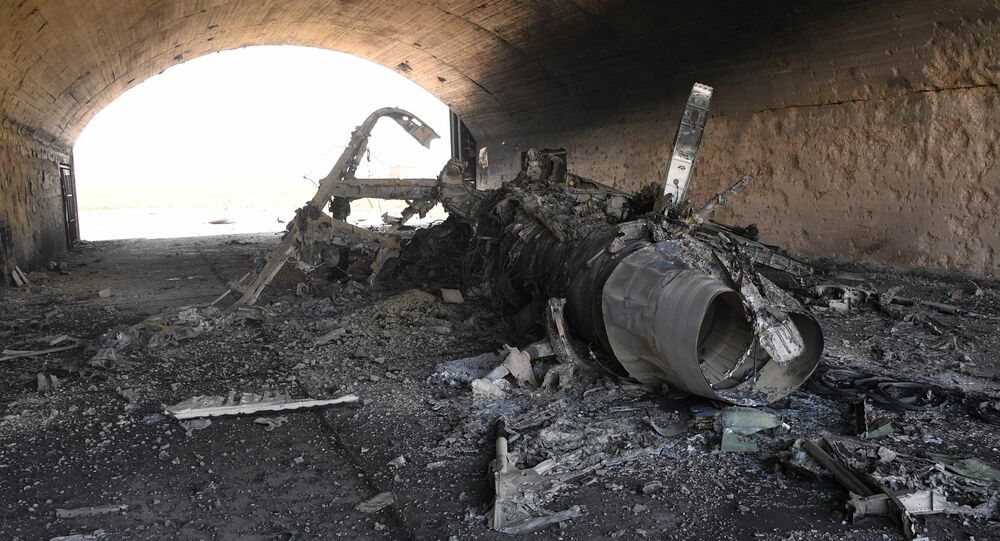 A senior US military official told reporters that some 20 Syrian waplanes have been destroyed by US cruise missiles launched on an airbase in the Homs province.

© Sputnik / Mikhail Voskresenskiy
Only 23 US Cruise Missiles Reached Syrian Airfield - Russian Defense Ministry
On Thursday night, the United States launched 59 Tomahawk cruise missiles at the Syrian military airfield in Ash Sha’irat, located about 40 kilometers (25 miles) from the city of Homs. US President Donald Trump said the attack was a response to the alleged chemical weapon use in Syria's Idlib on Tuesday, which Washington blames on the Syrian government. According to Homs Governor Talal Barazi, the attack killed five people and injured seven others.

All US cruise missiles reached their targets at the Syrian airfield, the official said. Earlier in the day, the Russian Defense Ministry said that only 23 Tomahawk missiles reached the Ash Sha’irat airbase, however, the Pentagon has already denied the information.

"Two ships that were part of this, USS Porter and USS Ross, between the two of them, they launched… 59 missiles. We have positive confirmation each one of those missiles hit the target," the official told reporters.

"We have reports of approximately 20 aircraft that were destroyed," the official told reporters.

The United States has determined the path Syrian warplanes took before the chemical attack in Idlib province, a senior US military official said on Friday.

"At the time of this [chemical] attack, we have these aircraft tracks," the official told reporters. "They go from the airfield at Ash Sha'irat to the town of Khan Shaykhun. So we know the routes that the aircraft took."

The US military official said that Washington has no confirmation of any military or civilian deaths in the strikes.

"We don't have any positive confirmation on either military or civilian deaths," the official told reporters when asked if there was evidence of military of civilian casualties.

© Sputnik
US Missile Attack on Syrian Airbase
The US military provided Trump with plans on Syria strike on Thursday, the official said.

"[On April 5], the President directed the Secretary of Defense to come up with military options in response to this attack," the official told reporters. "Those options were basically put together into recommendations and went forward to National Security Council… On April 6, those proposals were presented to the president."

The Pentagon believes that Syrian Army's surface-to-air missiles were destroyed in the US attack, the official said.

"We know that we have damaged petroleum sites. We have taken out their surface-to-air missile systems," the official told reporters.

The United States continues to use the existing deconfliction channel with Russia after launching missile strikes on a Syrian military airfield in Ash Sha'irat in the province of Homs, a senior US military official said in a briefing.

"We have a memorandum of understanding with the Russian forces… and that memorandum is still being used and being supported," the official told reporters. "We have had discussions with the Russians after the attack to confirm that the memorandum… is still active and they confirmed that it is."

The Syrian government carried out a chemical attack in Idlib province on April 4 to keep rebel fighters from gaining control of Hama airfield, a senior US military official alleged on Friday.

"There is a significant opposition offensive in Hama province," the official told reporters. "The regime was at risk of losing Hama airfield… We think that this attack is linked to a battlefield desperation decision."

The official said the Syrian government had been under intense pressure.

The US is assessing information whether Russia knew of or assisted in the Idlib chemical attack, he claimed. The official added that Washington sees no credible alternative to the source of the attack other than Syrian President Assad.

The US has high confidence the chemical used in the April 4 attack in Syria's Idlib province was a nerve agent, the official claimed.

"We have high confidence that a nerve agent like sarin was used in Khan Shaykhun," the official told reporters. "The symptoms are consistent with exposure to nerve agent."

"There is no credible alternative to the Syrian regime air attack as the source of the chemicals that killed so many Syrian civilians," the official told reporters on Friday.

© AP Photo / Elise Amendola
Idlib Attack: 'Non-Existent Chemical Weapons Became Reason to Invade Iraq'
Syrian opposition claimed Tuesday forces loyal to President Bashar Assad had used a chemical gas on people in the northwestern province, killing nearly 80 and injuring 200. Assad argued his government has no chemical weapons after agreeing to have them destroyed in 2013. He also ruled out having used chemicals against own people.