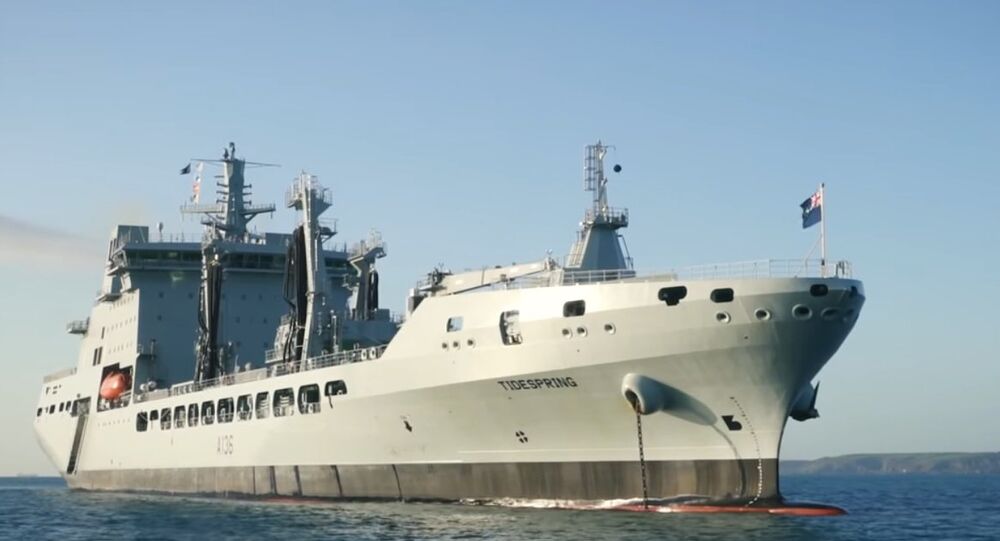 The RFA Tidespring, the newest support ship for the UK Navy’s Royal Fleet Auxiliary, has arrived for customization in Cornwall County. Weighing in at 39,000 tons and measuring about as long as three jumbo jets, the tanker can carry 1,300 cubic meters of fresh water and 19,000 cubic meters of fuel.

As a fleet manned by civilians, the Royal Fleet auxiliary furnishes the service with year-round, round-the-clock maintenance for its operations and support for its warships.This includes supplying food, ammunition, fuel and fresh water.

The ship and its associated vessels are a part of the Ministry’s Military Afloat Reach and Sustainability (MARS) project for tankers.

After A&P Falmouth received the contract to customize the tanker, MARS team leader Robin Boulby told Cornwall Live that the "Tidespring is more than a tanker. To be truly capable it needs to be able to integrate into a task force or operate as a stand alone unit. It has been designed to reduce vulnerability to enemy weapons.

"It has operating systems that mean it can support activities such as a counter-narcotics operation in the Caribbean or anti-piracy of the Horn of Africa. It can contribute to humanitarian relief. It is a very flexible asset for the Royal Navy."

The Tidespring is slated to enter service before the year’s end, and is the first Tide Class tanker fleet of four to go to Falmouth to be customized. It’s also the RFA’s first new vessel since the RFA Lyme Bay entered service in 2007.

Junior and senior crew members will be able to make use of the ship’s bar and lounge, and the vessel has cabins for 63 crew and up to 46 non-crew personnel. All of them will have access to the Tidespring’s hospital, blood bank and operational kitchen.

Second Line of Defense quoted Defence Procurement Minister Harriett Baldwin, saying "RFA Tidespring’s UK arrival is a key milestone in 2017, the Year of the Royal Navy, which will also see the MOD develop world-class ships and submarines in support of Britain’s role as a leading naval power…Backed by a rising Defence budget, the delivery of the Tide Class tankers is a crucial element of the Government’s £178 billion plan to ensure our armed forces have the equipment they need."

The replenishment ship was ordered from Daewoo Shipbuilding & Marine Engineering (DSME) in 2012, and was accepted by the Ministry of Defense in 2017 — about a year a half behind schedule.