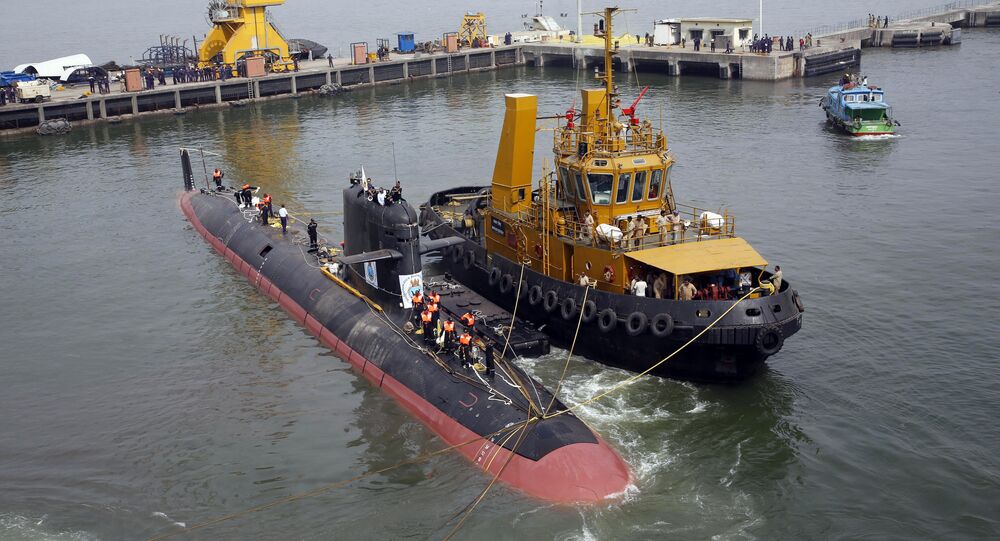 The first two crews to operate and run Kalvari-class submarines, based on the French Scorpene, completed their training from the reference operator of the French Defense Ministry earlier this week. The diesel-electric submarines are expected to be commissioned into the Indian Navy within a few months.

NEW DELHI (Sputnik) — India and France had launched the P-75 program in 2005 under which six submarines were to be constructed by Indian shipyard Mazagaon Dock limited. Nine French expert submariners had been deployed by Defense Conseil International (DCI), the French reference operator for the French Defense Ministry for the transfer of French military know-how to international partners, to train two crews i.e. 100 Indian submariners and transfer to them the know-how of the French Navy.

The trainees include several instructors who will subsequently train the crews of the four other submarines of the P-75 program. Training of the second crew is already under way.

"We are delighted with the successful training of the first crew of Indian submariners. DCI has shown once again its capacity to transfer its know-how and its training systems to its foreign navy partners," said Jean-Michel Palagos, the Chairman and CEO of DCI.

Training was performed on land, then on board the submarine at the dockside and at sea. Training covered the safe operation of the vessel, on the surface and submerged, in normal and degraded modes.

India is the third country to get submariner training from DCI. Earlier, the French team had trained naval officers of Chile and Malaysia.

Project 75 program is running four years behind schedule. Kalvari, the first of the class submarine, is presently undergoing sea trials and is likely to be commissioned into the Navy by mid-2017 without the Black Shark torpedo, because it is manufactured by a firm blacklisted in India due to corruption charges in the Agusta Westland VVIP helicopter deal.