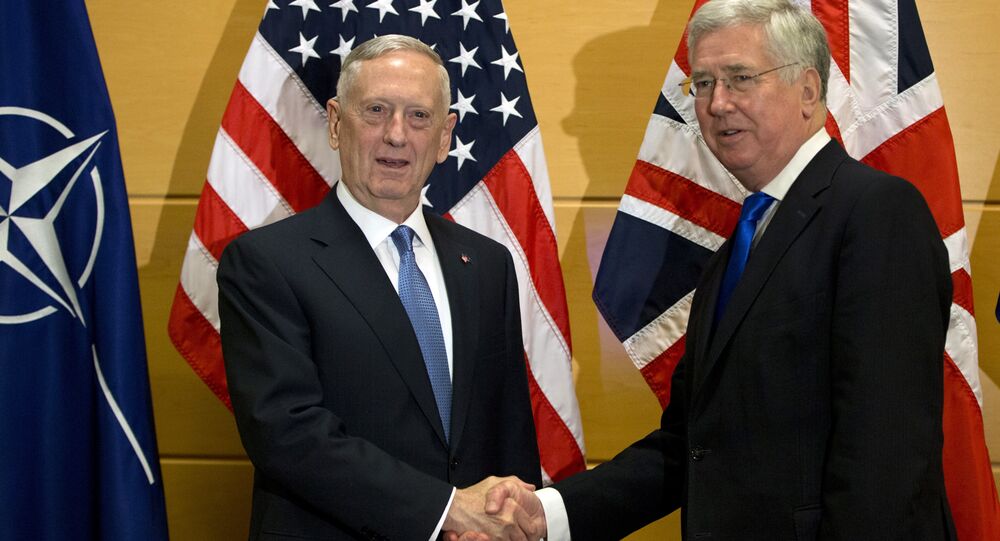 British Defense Secretary Michael Fallon welcomed his US counterpart General James Mattis in London for the first time, by calling the UK-US defense relationship "more important than ever," especially "as we leave the EU." It comes days after EU officials accused the UK of threatening to pull back on security co-operation.

For Michael Fallon, it was an all important first public meeting with the man nicknamed the "warrior monk" — due to his bachelor life and lifelong devotion to the study of war — since his appointment as US Secretary of Defense.

DefSec Sir Michael Fallon and US SecDef Jim Mattis meet today to review vital UK and US roles within NATO and progress against Daesh. pic.twitter.com/iMF8dBmYnP

Mr. Fallon chose a two-pronged approach, by emphasizing that the US is a critical security partner, while simultaneously downplaying the UK's reliance on the EU and NATO allies on defense.

"Our defense relationship with the US is unprecedented in its depth and scope. As we leave the EU, our bilateral relationships matter more than ever, so we'll be enhancing our cooperation and investing more in our joint F-35 fast jet program."

Indeed, Mr. Fallon chose to echo a key critique of NATO made several times over by US President Trump — that other NATO members need to contribute closer to the 2% of GDP target towards the organization.

Sir Michael Fallon has called for "fairer burden sharing" in #NATO, and says other countries in the alliance must "raise their game". pic.twitter.com/BiCHIhZ0k4

For his part General Mattis sought to reassure the UK, that the US does not see Britain's position as a global player as being diminished in the wake of Brexit.

"Britain's global leadership is needed now more than at any time in history" General Mattis said.

"We see each other on an equal footing."

The focus on UK-US security ties comes just days of consternation in Europe over what was perceived as being a threat by Prime Minister Theresa May, that if the UK is not given a good Brexit deal, the UK government could choose to draw back from intelligence and security cooperation with partners in Europe.

The prospect was rejected by many EU officials including the EU Parliament's chief negotiator on Brexit, Guy Verhofstadt

Mr. Fallon deflected questions on the controversy, instead choosing to focus on the UK's importance as a strategic military partner for both the US and EU.

"The [UK] defense budget is the fifth biggest in the world," Secretary Fallon told reporters.