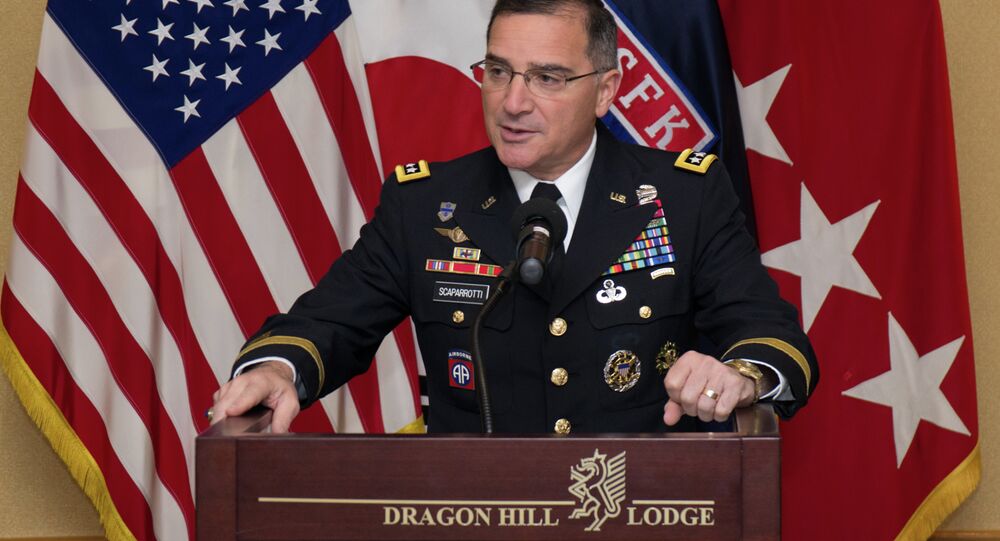 The United States must consider giving Ukraine lethal defensive weapons to aid Kiev in its fight in the eastern part of the country, US European Command commander Gen. Curtis Scaparrotti stated on Tuesday.

WASHINGTON (Sputnik) — Last week, Ukraine's Defense Ministry published photos from the latest training exercises in Lviv region, where Ukrainian servicemen are being trained up to NATO standards by instructors from the United States, Canada, Poland and Lithuania.

© AFP 2020 / YURIY DYACHYSHYN
Bumbling, Gun-shy NATO Instructors on the Brink of Getting Laughed Out of Ukraine

"I personally believe that we need to consider lethal defensive weapons for Ukraine," Scaparrotti told the US House of Representatives Armed Services Committee.

© AP Photo / Efrem Lukatsky
The Expendables: Kiev Dismayed After Realizing West Sees It as 'Waste Material'
Scaparrotti noted that US and European forces were assisting Ukraine with military training and government reforms.

The EUCOM commander also said he was impressed with Ukraine’s military discipline and eagerness to learn more.

US Senator John McCain, who heads the Senate Armed Services Committee, called last month for the United States to send anti-tank missiles and other military equipment to Ukrainian forces.

In September 2016, the US House of Representatives approved legislation to allow the supply of lethal "defensive" weapons to Ukraine, but the law still needs to be approved by the US Senate and signed by the US President.

© Sputnik / Stringer
US Supplying Lethal Weapons to Ukraine Likely to 'Raise Global Military Threats'
Russian officials have repeatedly warned against arms deliveries to Ukraine, stressing that it would only escalate the situation in the eastern part of the country.