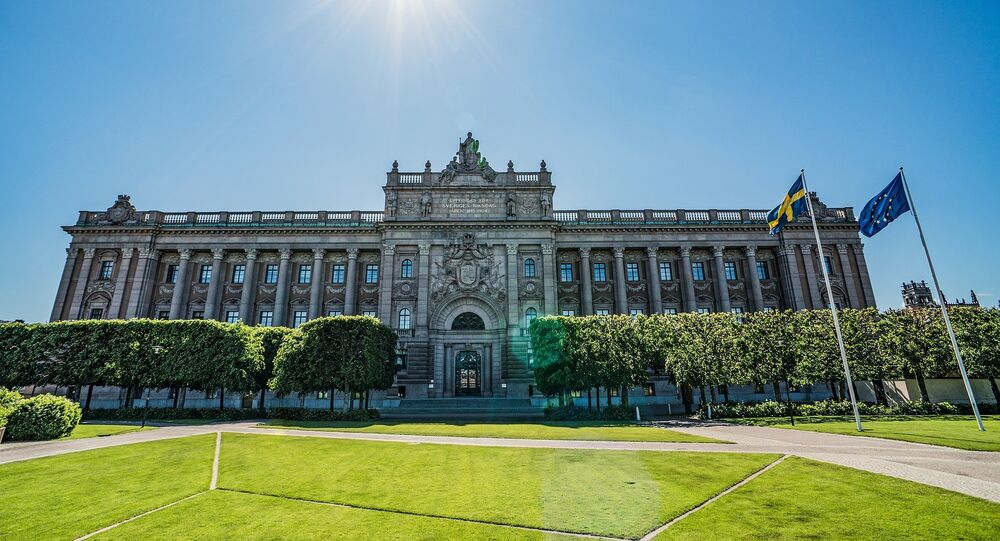 In line with Sweden's somewhat hectic war preparations, manifesting itself in a rollback to a draft army and serious military budget hikes, the Swedish parliament has held its first war drills in two decades.

© AFP 2020 / JONATHAN NACKSTRAND
Looming 'Russian Threat' Spurs Swedes to Dust Off Their Cold War Shelters
A delegation of about 50 Swedish lawmakers from both left-wing and ring-wing parties united in the drills which rehearsed the course of actions in the event of the threat of war or an outright conflict. The drill was held in an undisclosed location in near Stockholm, where the selected MPs rehearsed their actions to replace parliament if were war declared.

In the event of war, the Advisory Council have have the authority to convene a special War Delegation empowered to make decisions in lieu of parliament.

The drill included party leaders Anna Kinberg Batra of the Conservative Party, Annie Lööf of the Center Party, Jimmie Åkesson of the Sweden Democrats, Jan Björklund of the Liberals and Jonas Sjöstedt of the Left Party. Speaker Urban Ahlin declined to disclose the details of the maneuver for security reasons, yet commented that "it all went really well."

© AFP 2020 / JONATHAN NACKSTRAND
Stockholm Seducing Washington With 'Unique' Expertise on Russia
The last time the Swedish lawmakers held such an exercise was in 1997. Allegedly, the drill had been planned since 2014, however, the hostile situation in the world in general and the Baltic region in particular prompted the exercise.

"The worsening of the global environment played its part," Urban Ahlin told the Swedish tabloid newspaper Aftonbladet, adding that the drill would have been postponed "for a few more years" if Sweden found itself in a safer environment.

Earlier this month, Sweden announced plans to bring back conscription after roughly a decade of having a voluntary-based army, and to dust off its approximately 65,000 Cold War-era shelters to be used in the event of a nuclear war. Additionally, Sweden has been bolstering its military budget after two decades of consequently slashing its defense expenditure due to a larger focus on peacekeeping operations abroad.

© AFP 2020 / PETRAS MALUKAS
Thanks But No Thanks: Swedes Stand Up to Army Bosses Lobbying for NATO Accession
These measures were justified with the need to respond to global security challenges, including what was called Russia's "assertive behavior" in the Baltic region, as well as the conflict in eastern Ukraine and Crimea's re-unification with Russia, which Swedish politicians insist on referring to as "annexation."

Last time Sweden waged a war on its territory was the Finnish war (1808-1809), which ended in disaster for Stockholm. As a result of the war, Sweden lost the eastern third of its Baltic domains (today's Finland), which were incorporated in the Russian Empire as the Grand Duchy of Finland. After the subsequent offensive campaign against Norway in 1814, Sweden has effectively avoided war for two centuries.

1809 #Russia conquered #Finland from #Sweden during the Napoleonic Wars, map from 1914 https://t.co/ZwIexLkzvM … pic.twitter.com/iYrZxACu0Y